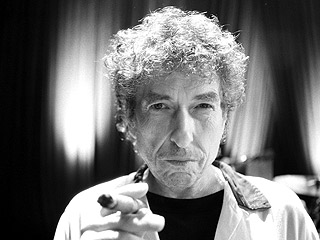 Lots of Dylan fans are way more obsessive than I am. Over at the National Examiner, apparently, they're doing a 70-day countdown.  Lots of good stuff.

The Village Voice jumped the gun on all this in January, by celebrating the 50th anniversary of Dylan's arrival in New York. They, too, feature a bunch of musicians running down their favorite Dylan songs - just a lot less famous musicians than Rolling Stone got. One of them, Todd Snider, contributes a great rambling prose poem about what he would do if he ever met Dylan, along with lots of anecdotes about people who have.

Inevitably, the AARP magazine rolled out a Dylan tribute, and they, too, managed to get more famous people to return their calls than the Voice did. Seriously, lots of good stuff at either site.

About.com runs down a sampling of product being released to coincide with the date, not including the Red House album I mentioned on Monday.

There are tribute concerts all over the world, but so far nothing on the order of the 30th anniversary concert. This show in Glasgow features Josh Rouse, among others, if you're in the neighborhood.

Bob's hometown of Hibbing Minnesota celebrates their most famous son for their 10th annual Dylan Days celebration, May 26-29. Stop by and set a spell.

Here's a nice update on Bob's curating a project involving unrecorded Hank Williams lyrics, similar to what Billy Bragg and Wilco did with Woody Guthrie's archives.

Let Bob have the last word here. If you haven't seen it, misinformation about his concerts in China led him to issue a statement on his website.