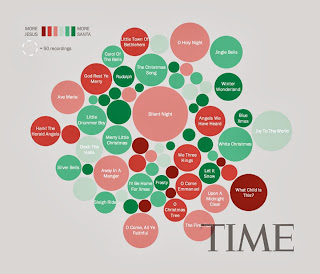 Recently Slate critic Chris Klimek lamented the absence of all but a few contemporary compositions from the canon of holiday favorites. In the chart at left (a cool interactive version accompanies the article), Time's Chris Wilson explains why that is: older songs are in the public domain, hence more lucrative to record.

And "number of recordings" is the way the music biz measures the popularity of Christmas songs. By those lights, the chart of recordings made since 1978 contains only one song written after 1978. It's the same one Klimek identified as the sole recent entry into the canon: Mariah Carey's "All I Want for Christmas is You." It's not a bad song (I particularly like Ellie Goulding's cover version), but it's not the "last great original Christmas song" either, fergawdsake.  It's been joined in the songwriter-royalty sweepstakes by a select few others from the past half-century, notably George Michael's "Last Christmas" and Donny Hathaway's "This Christmas."

But I've been collecting Christmas songs ever since my DJ days back in the mid-80s, and there are plenty of contemporary classics that get big airplay at our house every December, some of which never see the light of day on the Xmas-station radio playlists. They live in our hearts, not on the charts.

If we use 50 years ago as the cutoff date, we exclude "Do You Hear What I Hear," written in 1962, but opt in for "It's the Most Wonderful Time of the Year," written by Andy Williams in '63 (sorry, Mom, not one of my favorites). That year also featured great Xmas albums from the Beach Boys and Phil Spector, as well as the first of the annual Xmas singles from the Beatles. Spector's still-cool LP featured just one original composition, the certifiable classic "Christmas (Baby Please Come Home)." The Beach Boys, though, sounded better on the old standards than on Brian's just-okay new tunes (including "Little Saint Nick" and "The Man With All the Toys"). Meanwhile, the Beatles have never commercially released their Xmas recordings, so most people are unaware of their goofy originals like "Christmastime is Here Again" and "Everywhere It's Christmas."

1968 brought the first of a series of Motown Christmas albums, mostly a compilation of predictably excellent covers of the old standards, done Motown style. It wasn't until 1999 that the label saw fit to include Marvin Gaye's original composition "I Want to Come Home for Christmas." One must also bow in the direction of James Brown's annual series of endlessly funky Xmas jams. Attention must likewise be paid to the late, great Buck Owens and his "Christmastime's A-Comin'."

The most enduring 1960s songs come from a trio of TV Christmas specials: "You're a Mean One, Mr. Grinch;" "Holly Jolly Christmas;" and "Christmastime is Here," from Vince Guaraldi's beloved soundtrack to A Charlie Brown Christmas.

But one of my favorites is this blast of proto-punk Xmas angst from the Sonics:

The 1970s brought Hathaway's aforementioned neo-standard, along with Jose Feliciano's "Feliz Navidad." There were also now-ubiquitous Xmas singles from ex-Beatles John and Paul. Squeeze, The Band, the Kinks, and Elton John all made durable, if less lucrative, contributions. Albert King kicked in with "Santa Claus Wants Some Lovin'," and Tom Waits gave us his "Christmas Card From a Hooker in Minneapolis," unlikely to be enshrined in any Time-Life box set. And in 1973, John Prine contributed "Christmas in Prison," easily one of the best of the past five decades:


The late-20th-century tunes tend to situate more towards the secular end of the Jesus-to-Santa continuum. But the 1970s also included Jackson Browne's "Rebel Jesus" and Big Star's "Jesus Christ." These sit nicely alongside U2's 1988 cover of Woody Guthrie's "Jesus Christ," a mainstay of our holiday playlists.

Speaking of the 80s, that decade gave us what turns out to be another near-standard that might stand sturdier on its own two feet if royalties were not an issue: "Christmas Wrapping" by the Waitresses.


Songwriter Cris Butler explains how the tune was written as "a toss-off, a favor to our label," how surprising its success was, and how "blissed out" he is when he hears it on the radio today.

Two of the finest Christmas songs of the past 50 years came from the 1980s: "2000 Miles" by the Pretenders and "Fairytale of New York" by the Pogues. No disrespect to Mariah Carey or Jose Feliciano, but those are stone classics.

Also not to be forgotten is "Merry Christmas (I Don't Want to Fight Tonight)" by the Ramones - written by Joey, naturally. George Michael's aforementioned "Last Christmas" was released as a Wham! single in 1984, and has repaid its author with scores of cover versions to date.

The first (and best) of the dozen A Very Special Christmas albums, a benefit for the Special Olympics, was released in 1987. Nearly all the tracks are covers (some of them quite splendid), but Vol. 1 contains what may be the first (and best) great Xmas rap, "Christmas in Hollis," by Run-D.M.C.


There are, sadly (but unsurprisingly) no Christmas songs from most of my favorite 90s bands, like Pavement, Pixies, Sonic Youth or Nirvana. Radiohead did a passable version of "Winter Wonderland," while Björk has a 15-minute video called "The Jesus Prayer," which is, however, not very Christmassy.

But Tom Petty wrote "Christmas All Over Again" in 1992, and Steve Earle gave us "Christmas in Washington" in 1997. Japanese power-punk trio Shonen Knife released the charming "Space Christmas" in 1991. Each of these is worthy of wider coverage. And to my mind, the hands-down finest Christmas song of the past fifty years was gifted to us in 1994.

I speak to you of Robert Earl Keen's superb "Merry Christmas From the Family." It may be the funniest Xmas tune ever, but it's not a novelty song (for the purposes of this essay, we are ignoring such amusing but seldom-covered efforts from Bob & Doug Mackenzie, Elmo and Patsy, Martin Mull and Spinal Tap). Keen's family evokes universal feelings of bemused nostalgia for the Christmasses of our youth and the quirky people we grew up with. As funny as it is, it tugs at the heartstrings for me like no Christmas song since 1944's "Have Yourself a Merry Little Christmas." Here's a live version before an adoring crowd who know every word:


So far the 13 years of the 21st century have given us many new Xmas songs to enjoy. Just last month we got an instant classic when Nick Lowe released "Christmas at the Airport." Paul Simon's "Getting Ready for Christmas Day" is a keeper, as is "Everything Is One Big Christmas Tree," from Great American Songwriter Stephen Merritt's band the Magnetic Fields. The Yeah Yeah Yeahs have a charming entry, "All I Want for Christmas" (not to be confused with Ms. Carey's cash cow). Many are partial to "The Season's Upon Us" by the Dropkick Murphys, and I can't really argue with that. I'm quite fond of Mary Gauthier's "Christmas in Paradise," as well. Jonathan Edwards has eloquently made the case for "I Wish It Was Christmas Today" as a modern standard, and it certainly is in our household. In fact, the folks at Saturday Night Live have been livening up our holidays ever since Garrett Morris and friends unveiled their rollicking "Winter Wonderland" in 1975. Adam Sandler's "Channukah Song" is always welcome, and Darlene Love did us all a favor by belting out Robert Smigel's "Christmastime for the Jews." But no account of contemporary Christmas songwriting would be complete without a bow to the prolific Sufjan Stevens. He's released ten volumes of Christmas music, filled with both charming covers and dozens of originals, and tours regularly with his Christmas revue. Many of his songs may well stand the test of time, but who's got time to sort through them all?  My daughter, though, is partial to this one, which ends with an unlikely mash-up into a Joy Division classic:
The economics of Christmas songs being what they are, we may have to wait for these modern classics to fall out of copyright before the stars of the late 21st century start recording them in earnest. On the other hand, this cynic explains the paucity of modern Xmas standards as a function of the hegemony of Boomer nostalgia. And to that I say Pshaw, sir! My generation has no monopoly on sentiment, and we didn't ask to be born into a demographic bulge. I sympathize with the protest though, because in my book, they don't stop making good music just because you stop being young. 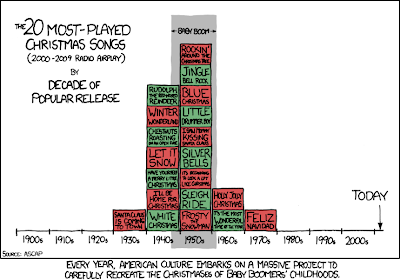 Posted by MZepezauer at 12:44 PM No comments: