That Time of Year

No, not that time. It's the time of year when music geeks everywhere are contemplating their year-end Top Ten Lists. But this year no list-making can commence until this coming Tuesday, when the Black Keys and the Roots will drop El Camino and undun, respectively.

Major releases don't often come out this late in the year; labels try to time their critical buzz, just like studios hold back their Oscar contenders. But these two discs seem to be worth waiting for. The tracks that have leaked so far are oozing awesomeness. The Keys just kicked my butt across the room with "Little Black Submarines," and the vitality of their sound is just my thermos of tea, simultaneously neo and retro. Both albums look like strong contenders for my Top Ten - though as always, there are a lot more than ten strong contenders, and the painful task is winnow them down until ten are left standing.

To my mind, some of the best albums of 2011 were by women. I've already written about Tune-Yards, and the St. Vincent album Strange Mercy is also one of my favorites. PJ Harvey's Let England Shake is one of her best in many years, and of course everybody loves Adele and Florence. I can see those last two cleaning up at Grammy time. Newcomers Cults and Wild Flag are also likely to turn up on a lot of lists.

The other new band I fell for was Yuck, a couple of British chaps with a strong '90s vibe (who have their own blog over here). The Kills also killed me, as previously mentioned. I got a big kick out of the third album by Gang Gang Dance. And then old favorites like Wilco, Stephen Malkmus, Tom Waits and TV on the Radio delivered strong sets as well.

That's sixteen names I've mentioned already, without even bringing up the Radiohead album. Or Bon Iver. Or James Blake. You can see I have my work cut out for me. But next post I'll mention a few of the also-rans that might make good stocking-stuffers for someone on your list.
Posted by MZepezauer at 9:07 PM No comments:


1. The Ventures/ Pipeline/ The Best of the Ventures

5. The Eagles/ Take It Easy/ The Very Best of the Eagles

8. Cake/ You Turn the Screws/ Prolonging the Magic

9. Frank Black & the Stax Pistols/ Breathless/ Brace Yourself! A Tribute to Otis Blackwell


When I was a radio DJ I used to love incongruous segues, but it never occurred to me to play the DKs back-to-back with the Eagles. Thanks, iPod!

Otis Blackwell wrote more than a thousand songs, including "Don't Be Cruel," "Fever," "Great Balls of Fire," "Return to Sender," "Handy Man," and "All Shook Up."

Jets to Brazil was an American band that released three great albums between 1998 and 2002. The frontman Blake Schwarzenbach was previously with the punk band Jawbreaker, and now makes his living as an English professor.

Matt Pond PA is the eponymous band of prolific New York-based songwriter Matt Pond. Not sure what the PA is for.
Posted by MZepezauer at 4:07 AM No comments: 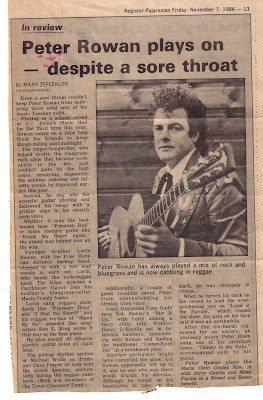 Twenty five years ago this month I was working in a liquor store in Capitola, California. I had just earned a fine arts degree and had no practical idea of how to make a living as an artist. One night I mentioned to my fellow retail clerk that Peter Rowan was playing in a small club down the street, and maybe we'd want to go see the show after work. He said he couldn't make it, but he dared me to write a review and submit it to the features editor at the local paper, where he freelanced as a sportswriter.

So I did. After the show, for the first of many times, I grabbed a copy of the setlist where from it had been taped to the stage floor. Then I snuck backstage and walked cautiously into the dressing room where an exhausted Peter Rowan was relaxing with his band. Despite his obvious illness, he was gracious enough to take a few questions from a novice music journalist. The next day I typed up my story and it was accepted by the Watsonville Register-Pajaronian, where it ran on 11/7/86. That was the first time I'd ever gotten paid for my writing.

One review led to another, and then to a job as arts editor at the local weekly. A quarter century later, I will always be grateful to Peter Rowan for helping me set out on that path. Oh, and for the other liquor store clerk. For the life of me, I can't remember his name anymore. But if you're out there, pal, Happy Thanksgiving.

Playing to a sellout crowd at O.T. Price's Music Hall for the third time this year, Rowan relied on a little help from his friends to keep things rolling past midnight.

The singer/songwriter, who helped evolve the bluegrass/rock style that helped beget the rockabilly revival of the 80s, just couldn't quite hit the high notes, rendering impossible the sublime yodeling and falsetto vocals he displayed earlier this year.

Instead, he dug into his acoustic guitar playing and delivered his songs with a grittier edge to his usually pure voice.

Whether it was his best-known tune "Panama Red" or more obscure gems like "Break My Heart Again," the crowd was behind him all the way.

Younger brother Lorin Rowan, with the Free Mexican Airforce backup band, chimed in with a few lead vocals in each set. Lorin, who heads the rock/reggae band The Edge, injected a Caribbean flavor into his brother's Appalachian/Celtic/Marin County fusion.

Lorin sang reggae standards like "Pressure Drop" and "I Shot the Sheriff" and his reggae version of  "Stand By Me" sounded like songwriter Ben E. King wrote it that way in the first place.

He also reeled off stinging guitar solos all night long.

The pickup rhythm section of Michael White on drums and Dave Perper on bass kept the crowd dancing, particularly during the reggae numbers (both are members of the Texas Chainsaw Band).

Another performer might have cancelled the show, but Rowan apparently felt up to it, and no one who was there would dispute that decision. Although he relied on his bandmates to take up the slack, he was obviously in charge. When he turned his back on the crowd to lead the ever-quickeneing jam on "Land of the Navajo," which closed the show, the grin on his face said it was all worthwhile.

After the die-hards clamored for another encore, an obviously weary Peter Rowan sang one of his sweetest tunes, "Thirsty in the Rain," accompanied only by his guitar.
Posted by MZepezauer at 12:55 PM No comments:


1. Steve Earle/ I Am a Wanderer/ I'll Never Get Out of This World Alive

9. Les Savy Fav/ What Would Wolves Do?/ Let's Stay Friends

10. Chuck Berry/ Too Much Monkey Business/ The Great Twenty-Eight
Posted by MZepezauer at 8:20 PM No comments: 
1. Fiery Furnaces/ Even In the Rain/ I'm Going Away

2. Space Mountain/ The Bright Side/ A Drawing of a Memory

3.  Carolene/ Thee Thee/ The Rough Guide to the Music of India

5. Karen O and the Million Dollar Bashers/ Highway 61 Revisited/ I'm Not There Soundtrack

8. Pixies/ Ain't That Pretty at All/ Enjoy Every Sandwich: The Songs of Warren Zevon

9. The Jayhawks/ All the Right Reasons/ Rainy Day Music

Posted by MZepezauer at 5:33 PM No comments:

It's not Wednesday night anymore, but I woke up early from a nightmare with a giant bug, which I took to be a message from my subconscious that I should post some corporate welfare links. Here are a few:

Mother Jones chips in with a nifty report on what a trillion dollars in military procurement buys you these days. Hint: taxpayers may not have gotten their money's worth. Shocking, I know. Just for good measure, Winslow Wheeler of the invaluable Center for Defense Information helpfully lobs a few incendiaries in the direction of Leon Panetta.

Meanwhile, in nuclear subsidy news, Alternet informs us that the military has outsourced the cleanup of the notorious Hanford site to the leeches at Bechtel, who are doing a crappy job for some big paychecks.

And finally, it's amusing to note that when you Google "corporate welfare" + "banks," one of the front-page hits is an ad for Bank of America. I guess no publicity is bad publicity.
Posted by MZepezauer at 5:47 AM No comments: