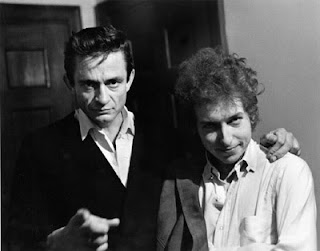 Bob Dylan and Johnny Cash/One Too Many Mornings
Dylan and Cash recorded together extensively in 1969, but only a fraction has been officially released. Those unofficial releases, though, are worth seeking out. This came from an album called Aces and Diamonds.

Bob Dylan and Joan Osborne/Chimes of Freedom
We've talked about this track before, and I highly recommend it if you can locate it. Try over here


Bob Dylan and Pete Seeger/ Ye Playboys and Playgirls
Dylan and the Godfather of Folk recorded this Bob-penned obscurity for a Broadside magazine flexidisc in 1963.

Bob Dylan and Willie Nelson/Heartland
You can find this songwriting collaboration between two giants of American music on Willie's anthology Revolutions Of Time...The Journey 1975-1993 – or buy an MP3 of the one track

if you like. Bob and Willie have toured together more than once, and may yet again. There's also a nice concert recording of them doing "Pancho and Lefty" together.

Gotta Serve Somebody: Gospel Songs Bob Dylan to goof around with Mavis in the studio. It's a fun track

Bob Dylan and Doug Sahm/She's About a Mover
Another duet from these two buddies popped up in a Random Ten post a while back. This one was from an Edmonton, Canada gig in 1988, where Doug joined Bob onstage to perform the Sir Douglas Quintet's biggest hit.

Bob Dylan and George Harrison/ Mama You Been on My Mind
As with Johnny, George and Bob did quite a bit of recording (in 1970), but released very little of it. This came from a bootleg called Almost Went to See Elvis. George also recorded this same Dylan song with the Beatles at the Twickenham Studios sessions, but that too has yet to see official release. George also did a lovely demo of Bob's "Abandoned Love" in the mid-80s, and there were some rumors that Bob would add vocals to it either before or after Harrison's demise.

Bob Dylan and Joan Baez/Never Let Me Go
Their 1964 duet of "With God On Our Side" is a great one, but they never sounded sweeter than on this night in December 1975, with the Rolling Thunder Revue. First recorded by Johnny Ace in 1954.

Bob Dylan and Bette Midler/Buckets of Rain
According to Midler, she tried more or less unsuccessfully to seduce Dylan, but talked him into recording a few songs for her third album Songs for the New Depression. This is the one that made the final cut.

Bob Dylan and Eric Clapton/Sign Language
Dylan has given away better songs than this, but it's a nice relaxed track in the middle of Eric's 1976 No Reason to Cry, with Bob on backing vocals.
Posted by MZepezauer at 4:17 PM