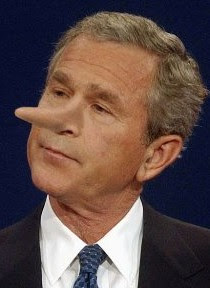 There's a bumper sticker I keep seeing: "You Can't Blame Bush Anymore." The hell I can't! Tell you what, I'll stop blaming Bush as soon as his policies stop damaging my country. That'll take a while...

Is George W. Bush the biggest liar ever to sit in the White House?

Of course, but it’s much worse than that. Bush’s lies are so pervasive and so portentous that they are doing unprecedented harm to our national security and our economy.


Certainly presidential prevarication is nothing new. From “I am not a crook” to “We did not trade weapons for hostages” to “Read my lips, no new taxes” to “I did not have sex with that woman,” we’ve come to expect that the big guy is gonna lie to us. But all of those presidents paid a price for their lies, in part because each faced an adversarial Congress and media.

“Mission accomplished” should rank with all of those, but Bush, in contrast, has a rubberstamp Congress and a cowed media. He can tell gigantic whoppers in his press conferences, interviews, even State of the Union speeches, and the press corps invariably swings its attention over to Michael Jackson, Gary Condit or the latest celebrity divorce. In fact, he took the White House in large part by portraying Al Gore as a liar over relatively trivial (and often apocryphal) misstatements. Then he held his office by painting John Kerry as a flip-flopper, secure in the knowledge that his own policy reversals on Yucca Mountain, carbon dioxide regulation, Homeland Security and his education bill would receive little scrutiny.

There is scarcely a major policy initiative that hasn’t been accompanied by a major campaign of deception. We now know that Bush’s White house has dispensed payola to journalists for favorable coverage and planted ringers at press conferences to lob softballs. Moreover, the Bush Administration has an arrogant tendency to fire truth-tellers (or those who refuse to lie) and to promote those who have told the biggest lies – after all, convicted perjurer Elliot Abrams now runs our Middle East policy. The $400 billion Medicare “reform” is a perfect case in point: the White House actively suppressed testimony that it would cost nearly double that amount.

The Administration has shown a similar contempt for science, deleting inconvenient truths about global warming, condom safety, abortion, Arctic drilling, nuclear waste storage, salmon kills and endless other issues from government websites and documents. And in all these cases, but especially that of disastrous climate change, we and our children are going to pay a huge price for Bush’s head-in-the-sand mentality.

Government economists aren’t immune from the disease, blithely issuing forecasts on job growth or deficit reduction that are completely divorced from reality. In large part because of uncertainty over our long-term fiscal health, the economy remains stuck in first gear, in spite of massive stimulus. Neither the markets or the HR managers believe the Administration is dealing with real numbers, and so continue to hedge their bets.

The man who promised a tax cut to “every American who pays taxes” refused to include the working poor in the child tax credit. The man who promised never to tap the Social Security trust fund now denies that any such thing even exists. The man who insisted that it’s “your money, not the government’s,” now borrows endless trillions for you and your kids to pay back with “your money.”

The financial cost of all these lies is bad enough, but of course many thousands are paying for George Bush’s lies with their blood. From “We had no idea that terrorists would use airplanes as weapons” to the crucial deletion of the words “in the US” from the title of the August 6, 2001 memo “Bin Laden determined to strike,” the Bush White House has labored mightily cover up their policy failures leading up to the 9/11 attacks. They opposed any investigation, backing down only under pressure from the families of the victims. Then they limited the budget of the 9/11 Commission to just $3 million–this after a $70 million inquisition into Bill Clinton’s 20-year-old real estate venture and his questionable judgment in DNA distribution.

After 9/11, the President famously declared that he would get Bin Laden “dead or alive.” FDR had completely defeated Imperial Japan just 1365 days after Pearl Harbor, and yet the clock keeps ticking on Bush’s boast well past that point.

But it gets worse. First he let Osama slip away at Tora Bora because he used unreliable mercenaries instead of US troops to pursue him. Then, according to reporter Seymour Hersh, US forces stood by and did nothing while hundreds of al-Qaida fighters were airlifted to Pakistan. And then, long before the job was done, Bush pulled our special forces out of Afghanistan to start preparing for his war against Iraq. Worse still, according to author Bob Woodward, Bush illegally diverted funds Congress had appropriated for the Afghan War–an impeachable offense, one must add. And now, incredibly, the CIA chief says he knows where Osama bin Laden is, but can’t just go get him because he has to respect the “sovereignty” of other countries. Breathtaking.

And then, of course, Iraq.

From the 500 tons of chemical weapons, to the 30,000 munitions needed to deliver them, to the mobile weapons labs, to “we know exactly where they are,” to the aluminum tubes, to the uranium from Africa, to the robot airplane drones, to the “mushroom cloud” that threatened us because “he has, in fact, reconstituted nuclear weapons,” not one word of it was true. And then he has the gall to tell Polish journalists that “We've found the weapons of mass destruction. You know, we found biological laboratories.”

The biggest lie was the backbone of the effort to sell the Iraq War as a “new product” (as Chief of Staff Andrew Card called it): the Saddam-Osama links. Up to 75% of the American public believed this fraudulent sales pitch at one point, and more than 30% still do. The lies were both implicit and explicit. Bush would invariably mention Saddam and Osama in the same sentence, or make frequent references to 9/11 when explaining why we needed to invade Iraq. But Dick Cheney kept flogging the story of Mohammed Atta meeting an Iraqi spy in Prague long after it had been utterly discredited. And Bush kept saying things like “you can't distinguish between al Qaeda and Saddam when you talk about the war on terror.”

Bush can’t let go of this crutch, making repeated references to 9/11 in his June 28 speech explaining why his Iraq policy is such a mess. This has to be the biggest and most damaging of all Bush’s many lies; the cost in blood in treasure is literally incalculable for years to come.

Now, at last, Bush is starting to pay a political price for his many lies. His lies about the impending doom of Social Security have proven to be massively unpopular. The lies told by his allies about the Schiavo case seem to have been something of a tipping point as well. And finally, despite the efforts of the mainstream media to ignore it, the Downing Street Memo has caught Bush in a huge lie at an inconvenient time.

Bush repeatedly told the American public that he went to war in Iraq “reluctantly” or “as a last resort.” The head of British intelligence tells us that Bush had made up his mind months in advance, and that “intelligence [was] being fixed to support the policy.” This, too, is an impeachable offense, manipulating the agencies we rely on to keep our nation informed about the threats we face.

But of course, it gets worse. Bush told author Mickey Herskowitz in 1999 about his plans to attack Iraq because he wanted to be “be seen as a commander-in-chief” in order to “get everything passed that I want to get passed and… have a successful presidency." This is astonishing cynicism, even for him, but it fits with everything we know about his public and private record.

History will tally the damage done to our republic and our globe by George W. Bush and his whole dishonest career. But it’s especially ironic, in light of his professed desire to spread democracy, that he should be undermining its foundation here at home: the principle that “governments derive their  powers only by the just consent of the governed.”
Posted by MZepezauer at 1:28 PM