S. Carey and Other Lives, currently touring together, are kindred spirits: midwestern indie-folkies with a hushed, layered, midtempo approach. Each band has forged a meticulous soundscape, and for both, the motto seems to be "consistency is the spice of life." The results are not for the impatient, but within the aural universe of either band, the variations play out with complexity and subtlety.

S. Carey is in no sense scary – it's led by Wisconsin singer/songwriter Sean Carey (and also includes his sister Shannon Carey). Sean, who has a degree in classical percussion, mostly plays piano onstage. Carey also plays drums for Bon Iver – a job he scored by memorizing For Emma, Forever Ago and then approaching Justin Vernon backstage, telling him he'd like to work with him.

Carey brings this sense of purpose to his own songs, collected on his debut All We Grow

. If they don't achieve Bon Iver's melodic heft, it's because Carey is interested in a more meditative, ambient sound. His songs owe as much to minimalist composers like Glass and Reich as to indie compatriots like Fleet Foxes or Sigur Rós, and are more concerned with instrumental blends than with lyrics.

Onstage, Carey and his bandmates all play multiple instruments, with much of the color coming from guitarist Nick Ball. The songs maintained a consistency of mood, sedate and portentous. Only one number, mid-set, built up into a powerful roar as Carey turned from his keyboard to attack a pair of kettle drums, Ball climbed the fretboard to a blissful crescendo, Jeremy Boettcher switched from upright to electric bass, and Ben Lester stroked a bow across his vibraphone keys. 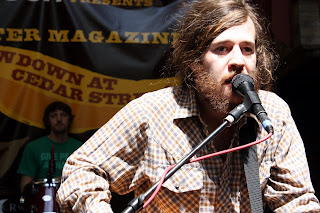 Oklahoma's Other Lives also consists of five multi-instrumentalists with a generally restrained sensibility – but in their case, they don't limit themselves to one instrument at a time. Their fuller presence comes from a holistic approach to looping that never feels gimmicky. Among the many components of their stage setup were cello, violin, harmonium, drum set, tympani, marimba, trumpet, castanets, acoustic guitar, and electric bass. They use a software called Ableton Live to mix in real time, with players turning from their main axe to punctuate the ensemble sound with brief, colorful ostinatos for the sampler.

, is a progression from their eponymous 2009 debut. As frontman Jesse Tabish told the Muse in Music: "I just started hearing more in my head the sound that I was looking for and started getting into MIDI keyboard and I have an orchestral program on my computer so I was just able to daydream about a more idealistic approach to the record."

Tabish's aquiline tenor soared above his bandmates as each song rose from an organic pulse to the intricate grandeur of their combined instrumentation. If there was little variability to his singing, it's because he regards his voice as another of the instruments, leaving the impressionistic lyrics up to the listener to interpret. Tabish has stated that Other Lives is "more of an ensemble than a rock band," and as such, they succeed on their own terms. Their set was every bit as impressive as the headliners', and each band complemented the other like a handshake.

Note: I won free tickets to this show by answering the trivia question: "Which member of the Senate Watergate committee is still serving today?"
Posted by MZepezauer at 11:50 AM