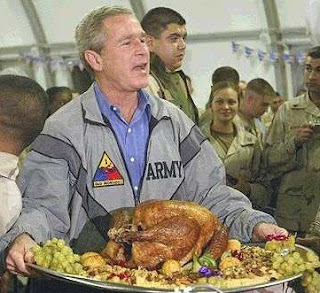 George W. Bush fans are keen to salvage something out of the wreckage of his foreign policy disasters, and one of the most-grasped-at straws is the assertion that "the surge worked." Even if it did, that hardly erases the blundering carnage that Bush's inept occupation unleashed over the previous four years.

But a few other things were happening in 2007 while US troop strength increased by 15% or so. First, the Shi'ite community in Baghdad, having been empowered by the occupation to ethnically cleanse as many Sunnis as possible out of mixed neighborhoods in Baghdad, had pretty much completed that project. Second, many of the Sunni militias outside of Baghdad turned against the local "al-Qaida in Iraq" franchise - right about the same time they started taking payments from the US. And third, Moqtada al-Sadr decided to stand down his forces and wait us out.

Arguably, these three factors had more to do with the decreased violence in Iraq that followed the surge. But a decline from 2004-06 levels of violence still leaves room for a lot of killing. And the surge, of course, did nothing to solve the underlying political differences between Iraq's three main demographics – witness yesterday's bombing in the oil-rich Kurdish turf. But it did help solve some of Bush's political problems in the US, by putting a fig leaf on an unmitigated catastrophe - and punting the hard choices to his successor.

Today, Barack Obama fans are keen to point out that he kept his campaign promise to end US combat operations in Iraq - though, it should be remembered, that promise included the presence of a residual force.  Keeping the promise was made easier for Obama by the Iraqis themselves. During Bush's lame-duck months, they renegotiated the status of forces agreement with the US, more or less forcing Bush to agree that all US troops would leave Iraq by December 31, 2011.

Now that it's 2011, the US has been broadly hinting that if the Iraqis want to extend an invitation for our troops to remain past the deadline, they really really really need to let us know soon - so we can begin planning an orderly withdrawal if they don't. But the deadlines implied in those broad hints have come and gone with nothing more than a vague suggestion from Nouri al-Maliki that if it's okay with parliament, it's okay with him.

But parliamentary approval is unlikely to come, because most Iraqis really really really want US troops to leave. That's a bit of a conundrum if Obama want to keep the "residual forces" part of his promise. There are still 40,000 troops there, but crucially, there are also 70 US bases, built at considerable expense, with some of them among the largest in the world. How this needle gets threaded is something observers have been observing with much harrumphing and raising of eyebrows.

Part of the answer was on NPR yesterday - the State Department plans to roughly double the number of mercenaries - er, contractors - working in country. That this shell game will impress the Iraqis is unlikely, but it may well provide a fig leaf for their own government's political conundrum (that is, mollifying allies in both Washington and Teheran). Meanwhile, Moqtada has made it known that his cease-fire ends on New Year's Eve, and has already resumed territorial pissing.

George W. Bush had to have the difference between Sunnis and Shi'ites explained to him when he made the decision to invade Iraq. Now he's given the world a Shi'ite-dominated government there, with many resulting tectonic shifts yet to play out. How our endgame in Iraq plays out is still of utmost importance – if there ever is an end.
Posted by MZepezauer at 10:11 AM