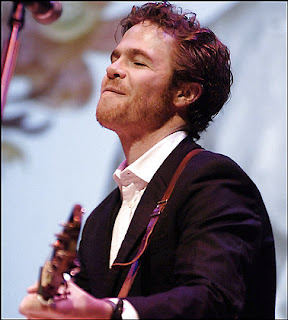 I speak to you tonight of two men named Josh. They have much in common besides the initial letter of their surnames. Both of them are accomplished singer-songwriters. Both are storytellers, their songs filled with wayward lovers and other well-drawn characters. Both work in more or less the same idiom: mostly acoustic, folk-tinged Americana, with occasional pop flourishes. Both are midwesterners, born in Idaho and Nebraska, respectively. Both were born in the early- to mid-70s, four years apart, and both began recording in the late 90s. Both started out with spare, impressive debut albums and have matured musically like bottles of old wine.

So how the hell are you supposed to tell them apart?

Well, Ritter is fitter, he's the heavy hitter, and more liter...ary. That is, he's probably the better-known Josh R, so his bankbook may be fitter. His lyrics are a bit denser, more mercurial, inventive, indelible, so he's the  heavy hitter of the two - with all due respect (which is considerable). And he's written a book, so it's not just his songwriting that's more literary.

Meanwhile Rouse has helpfully named one of his recent albums Country Mouse City House. So your mnemonic device for these guys is definitely the rhyming strategy.

Of the two, Rouse is the more prolific – though just as terrific – with nearly twice as many albums in the same decade-plus-change the two of them have been at it. He likes to release a steady stream of EPs, rarities and downloads to keep his fanbase happy. Rouse also sings just as sweetly in Spanish as he does in English, and his lilting voice is reminiscent of Paul Simon's.

Both of them are well worth checking out, if your taste runs to say, Ryan Adams/Whiskeytown, the Jayhawks, the Pernice Brothers, Ron Sexsmith or Todd Snider. For you older folks, think maybe Jackson Browne. Or Greg Brown.

And here are some slick videos from each of them, both of which start with somebody walking on a beach. This is getting spooky, guys: