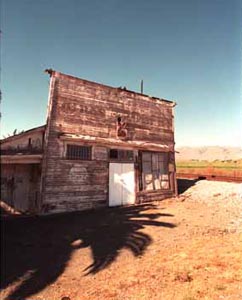 When I was a teen, Alviso was a bit of a joke for us, a kind of a run-down, low-rent, out of the way section of the Bay Area. A few times we parked there and hiked along the railroad tracks to visit the ghost town of Drawbridge, half-sunk into the mud.

Yesterday, on a whim, our host drove us through scenic downtown Alviso for a quick visit to the wetlands . There I learned that its peculiar geography still makes Alviso a poor candidate for gentrification, despite its proximity to Silicon Valley.  True, there was one big condo project nearer to the frreeway, and TiVo's headquarters are situated just within the city limits, but otherwise Alviso looked much like it did in the mid-70s.

But more importantly, I found that Alviso is one of the hotspots to reverse a trend that was one of the sadder byproducts of the rise of the Bay Area metropolitan area: the destruction of the wetlands. Down by the shoreline, a restoration project is underway, with many of the old salt ponds being converted back into riparian areas, and others preserved as ponds for the benefit of migrating waterfowl.

As if on cue, we were approached by a birding geek in full regalia, who was pretty excited, in a deadpan sort of way, to have sighted a Wilson's Phalorope . A bunch of them, in fact, though they looked like tiny specks to me, since he wouldn't share his binoculars with civilians. On inspection via Google, however, they are a fine-looking avian, and impressive in their mighty migration from the Andes to the Yukon, especially given their tiny size.

So if you happen to be in the South Bay, be aware of the possibility of a rare phalorope sighting. And tread lightly on the land.
Posted by MZepezauer at 10:52 AM