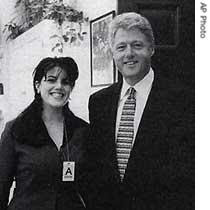 Times like these are good for the cartoon business, but not so good for the nation's business. While the media feeding frenzy on the president's sex life continues unabated, we all have much less attention for what the other hand is doing. In the meantime (and it could get meaner still) the Asian Contagion has the global economy possibly teetering on the abyss, and our political leaders are cheerfully preparing to start another war, blithely ignoring the opposition of most of the rest of the planet.

But enough about that! What about Monica and Bill? My own view, as previously stated, is that the ownership of the country prefers politicians with the potential for blackmail when promoting or vetoing candidates for higher office. That way, if substantive policy disputes arrive, the hired hand can be fired with impunity. The politics of scandal in this country are such that nearly every major politician has major dirt on them, but if they play ball, they survive. Witness Henry Hyde and Phil Gramm, with S&L scandals that make Whitewater look like a carny sideshow, or the adulterous affairs of Bob Dole and George Bush, studiously underpublicized.


Under this hypothesis, the involuntary departures from public life of such figures as Richard Nixon, Gary Hart and others can be explained as the result of a power play among competing elite groups. Or, at times, as the result of a strong consensus among elites. Occasionally these disputes turn more violent, as in the puncturings of Presidents Kennedy and Reagan. Sometimes playing the scandal card is used only to cow the politicians back into line, as may have been the case in Iran-contra. As we learned only later, there was bipartisan agreement within the congressional investigation to avoid pursuing any impeachable offenses.

Therefore, in this scenario, Clinton may yet survive if he heeds the warning (though he seems to have received no shortage of them, in terms of scandal cards and various errant bullets) and modifies his policies to satisfy whatever elite groups are disgruntled. The nature of the policy dispute in such cases is not usually clear until much later, though some rumors have it that this may involve Middle East policy.

This space has been mighty critical of Bill Clinton from the very beginning (and before). But it'd be a great thumb in the eye to Ken Starr if the Comeback Kid survives. The sheer volume of leaks and rumors emanating from the Special Prosecutor's office do seem to indicate a concerted effort to snowball the president out of office on an avalanche of media hype and public indignation. It certainly is interesting how the more salacious matters, involving eyewitnesses, phone sex and er, DNA evidence had to be retracted. And it's even more interesting to see the rightwing connections of everyone with dirt on Bill: Mr. Starr, Ms Tripp, Ms. Goldberg, and even Monica herself. Ms Lewinsky's web page links to right-to-life organizations - so why intern for a pro-choice administration? And are the reports true that she had her sights set on Bill even before she met him?

But the public did a curious thing. They seem to believe the Republicans are no better, whether in terms of adultery, lying, crooked S&L deals or campaign fundraising, and so apparently prefer to stick with the crook they've got. So the vast rightwing conspiracy is going to have to come up with better cards than these.

If, as seems likely, Clinton is lying through his teeth, he should have done the honorable thing: admit it and resign. The majority view seems to be that his sex life is his business. So sure, let's leave his sex life out of this. This is the guy who, upon taking office, suddenly discovered that the deficit was much worse than he thought, so the whole putting-people-first platform he ran on had to be chucked out the window. This is the guy who abhorred George Bush's business-as-usual indifference to human rights in China. This is the guy who "accidentally" signed the salvage rider, the kind of timber legislation that Reagan and Bush could never have gotten away with in their wildest dreams, and then told us he'd just made a mistake. Here's the guy who promised to stop the persecution of gays in the military, and came up with a compromise that made the situation even worse. Here's our champion of campaign finance reform... need I go on?

It seems to me that hoping or praying that the president is not lying is kind of beside the point. Lying is an essential prerequisite for the job, and Bill Clinton is one of the all-time champs, right up there with Dutch Reagan. Everybody who puts their hopes in setup theories, or views this as simply a rightwing conspiracy, has to contend with Gennifer Flowers. He's admitted it! That means all of his carefully worded denials were just bullshit, and the army of spin doctors who were sent forth to say that this was just an attempt by Bill Clinton's enemies to ruin him have zero credibility if they want to try that again.

The real, issue, of course, is not whether or not El Schmucko (as Ms. Lewinsky has so memoraby dubbed him) can't keep Air Force One in the hangar. The issue is perjury and obstruction of justice, the same issues that ran Dick Nixon out of office. An affair does seem like a trivial matter to impeach over, but as I wrote four years ago this month: "If we on the left won't call for [Clinton] to face the music, we can hardly have any credibility the next time a Republican president breaks the law." Of course it's not fair that Reagan and Bush got away with much nastier crimes, which actually ended up spilling buckets of blood. But, if as seems unlikely, Ken Starr can prove obstruction of justice, bring on Al Gore.

What I'm trying to say is that if Bill Clinton goes down (sorry) he brought it on himself. Even if Monica Lewinsky was a secret agent for the Lizards, with big hair and cleavage computer-selected to make Bill weak in the knees. Even if it never went beyond those big videotaped bear hugs and he settled for fantasizing about her in the Presidential Vestibule. After all these years of dissembling, it's the last straw, and even if you remove it, the camel's back is still broken.

But if, instead, he chooses to drag the whole country through this for the next six months in hopes of getting as good a deal as he can, I have to say: the man deserves due process, just like anyone else. Still, given a choice between a wounded Bill Clinton (though the wounds seem to be healing quickly, there may yet be more to come) and President Gore, who will inevitably coast through a lengthy honeymoon, I have to give the nod to Al. As far as anyone knows, they have identical agendas. Politically, anyway.

Although: it's pretty damn scary to have Newt a CIA heart attack drug away from the presidency. If the power structure wants to be rid of a faithful servant like Clinton, one wonders what else they have in mind. Or let's leave my Wacko Conspiracy Buff paranoia out of this. An incumbent Gore, especially one who didn't pardon his predecessor, gives us an entirely different dynamic (okay, maybe that's not the best word when discussing Al). The battle for the soul of the Weasel party is one that I'd rather see taking place on a more level playing field. Come to think of it, maybe that's exactly what the power structure doesn't want.

So, what the hell: two cheers for the Comeback Kid. Now what about that Asian bailout?
Posted by MZepezauer at 12:45 PM