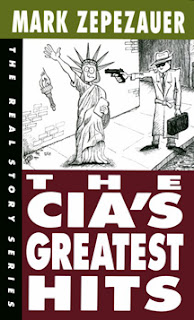 I just made a deal to put out a new edition of my 1994 book, The CIA's Greatest Hits. Along with fixing any bonehead errors and adding updates to existing chapters (Libya, for one), there will be six chapters of new material, each with a new cartoon. Here's a sneak preview of the Agency's new material - though I know many of you still prefer their early work best....

Kosovo: The 1999 war in Kosovo reflects a familiar pattern with the CIA: alliances with drug-runners, terrorists and gangsters. The lucky ally in this case was the Kosovo Liberation Army (KLA), which succeeded in wresting the territory from Serbia with the help of a 78-day US bombing campaign. What’s interesting is that al-Qaeda may also have been involved – on the same side as the US.
September 11: As with the JFK hit, if the CIA had nothing to do with this, it had a funny way of showing it. That is, they seem to have gone to absurd lengths to obfuscate the truth. Small wonder, since an insider trading scandal that may indicate foreknowledge of the attacks was traced to investment bank Alex, Brown. The executive director of the CIA, “Buzzy” Krongard, was a former chairman of that firm. Other allegations have been raised concerning the CIA’s monitoring of the 9/11 hijackers and the flight schools they attended.
Afghanistan II: As in Kosovo and so many other places, when the CIA gets involved, drug trafficking spikes. Afghanistan is now the world’s largest exporter of heroin, and the CIA has been involved with many of the same cast of characters from the first time around. The Af-Pak war, as it’s now known, is also where the CIA has been experimenting with new technology, and newly legalized “harsh interrogation” techniques in its network of secret prisons.
Iraq II: The CIA has taken the hit on this one for providing “faulty intelligence” in the lead-up to the war. The flip side of that is the extent to which the CIA was happy to tell the White House exactly what it wanted to hear. But if that wasn’t enough, old “Team B” veterans under Dick Cheney helped set up their own basement CIA to “stovepipe” real and manufactured intelligence to the Veep and the media. The Iraq War also raises the question of where Blackwater ends and the CIA begins.
Plamegate: Now a major motion picture, the scandal of how Cheney’s underlings outed an undercover CIA officer is relevant today for more than just exposing GOP hypocrisy on national security. Valerie Plame’s specialty was nuclear proliferation. As we hear familiar stories of a Middle East adversary on the verge of acquiring nuclear weapons (this time, Iran) it’s helpful to consider how her work might have helped prevent such a scenario, if she hadn’t been so rudely interrupted.

Torture Tapes: Today’s CIA faces burgeoning scandals involving “secret rendition,” networks of clandestine prisons, Cheney’s assassination squads, and missing videotapes of tortured detainees. These familiar scandals serve mainly to illustrate how far backwards official Washington will bend to avoid holding anyone accountable. But they also show how the CIA has learned from past mistakes. In legalizing and or privatizing most of what they do, the CIA can run rings around toothless congressional “oversight,” pesky reporters, and books such as this one.
Posted by MZepezauer at 5:25 PM