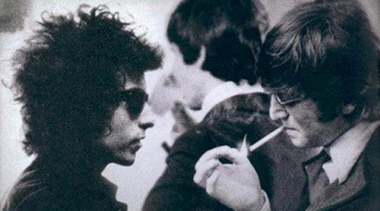 Joan Baez, "Diamonds and Rust"
"You who are so good with words/and at keeping things vague." Whether their romance was rekindled around that time (1975), you can see genuine tension in the scenes between, Dylan, Sara and Baez in Renaldo & Clara (even though Baez seems to be the only one in that movie with any acting chops).

Syd Barrett, "Bob Dylan Blues"
Both a parody and an hommage: "My clothes and my hair's in a mess/but you know I just couldn't care less."

David Bowie, "Song for Bob Dylan"
From Hunky Dory, 1971: "Some words of truthful vengeance they could pin us to the floor"

Cat Power, "Song for Bobby"
She contributed a fine cover of "Stuck Inside of Memphis..." to the I'm Not There soundtrack. "A phone call from your New York City office/You were supposedly asking to see me"

Chumbawamba, "Give the Anarchist a Cigarette"
From their album Anarchy, riffing off an exchange between Dylan and Albert Grossman in Don't Look Back. "Nothing ever burns down by itself, every fire needs a little bit of help."

Dylan is of course also mentioned in the Beatles track "Yer Blues" and the Plastic Ono Band track "God."

Don McLean, "American Pie"
Not actually a song about Bob Dylan (The Jester), but about rock history from the 50s to the 70s, in which Bob of course plays a prominent part. "While the King was looking down the Jester stole his phony crown"

Michael Nesmith, "St. Matthew"
Kind of obscure, but if he says it's about Dylan, who am I to argue? "Part of it is loneliness and knowing how to steal/but most of it is weariness from standing up, trying not to kneel."

Loudon Wainwright III, "Talking New Bob Dylan Blues"
Easily the funniest song ever written about Dylan. "Self Portrait/Well, it was an interesting effort"


Yeah, I got a deal and so did John Prine
Steve Forbert and Springsteen, all in a line
They were lookin' for you, signin' up others
We were new Bob Dylans, your dumb ass kid brothers

Wilco, "Bob Dylan's 49th Beard"
From the More Like the Moon EP, a bonus disc of tracks from the Yankee Hotel Foxtrot sessions. "And things got weird/And I started growing/Bob Dylan's beard"
Posted by MZepezauer at 1:29 PM