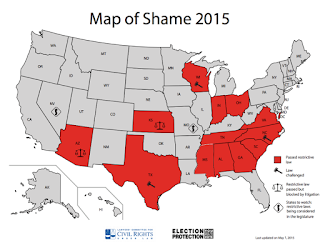 Once again, I allowed myself to waste a morning online, arguing with a conservative troll who calls me a liberal fearmonger and an Alinskyite for suggesting that one of our major parties is working to curtail voting rights. I'm never gonna change his mind, but I've got 750 words and a bunch of links, so I might as well feed my moribund website...

Is it a democracy or a republic? Throughout our history, we’ve seen struggles between those who preferred one to the other. The founders were very suspicious of democracy, but even at that time, and certainly ever since, people have struggled to expand their voting rights. So the answer is, a little of both. But these days, a whole lot less of the former.

I’ll let you ponder the views of the late Lee Atwater, who helped Reagan and the Bushes to modernize Nixon’s southern strategy, when it comes to the GOP’s views on civil rights. It’s true that for 100 years after Reconstruction, the Democratic party was home to racists. But since the enactment of the Voting Rights Act, the parties have switched places, and there’s a good reason why the KKK was cheering on the recent GOP victory.

You want to know why requiring voter ID is curtailing voting rights? The problem is not with the ID per se, but with the discriminatory ways in which the requirements are applied. That’s why a top Pennsylvania Republican could brag that his state’s voter ID law could help swing his state to the GOP. Minority voters are far less likely to have driver’s licenses in the first place, and red states are full of hurdles like making the IDs available only in certain offices many miles away, keeping them open only on a limited basis (in one county, literally only on the fifth Wednesday of the month), and requiring exorbitant fees if you can’t lay your hands on a birth certificate or a passport. In some jurisdictions, a hunting license or military ID is sufficient to allow you to vote, but a college ID card gets you turned away. But this is just one of many tactics used to suppress the minority vote.

Red states play all kinds of games with voter registration, enacting more stringent deadlines and hindering efforts by groups like the League of Women Voters to help enfranchise people. They have consistently cut back on early voting, weekend voting, vote by mail, and other methods designed to make it easier for people to vote – while the other party has fought to expand those rights. When it comes to Election Day, long lines at the polls in minority communities are a familiar story. Rich neighborhoods are allocated plenty of machines and poll workers so that voters can breeze in and out - while poor communities are saddled with outdated polling equipment, fewer polling places, shorter hours, fewer poll workers, and hence long lines that can cost you most of the day, a special hindrance to those who can’t afford time off from work.

None of this happens by accident, as my citation above illustrates. That’s why Chris Christie made an explicit pitch in 2014 that electing more GOP governors would allow his party to win the White House by controlling more of the “voting mechanisms.”

These methods are enhanced by putting elections systems in the hands of elected party hacks (like Katherine Harris in FL or Ken Blackwell in OH), rather than making it a nonpartisan position. This allows red states to use a voter suppression method far more effective than voter ID laws: purgingthe voter rolls. Red states are using a vast computer database called the Interstate Voter Registration Crosscheck Program to strike names from the rolls of hundreds of thousands of people who are supposedly voting in multiple states (only four people have been convicted of doing so). The database can also be used to force eligible voters to cast provisional ballots, which are often discarded, uncounted,  after the election has been called.

These lists can be used to specifically target minority communities and are subject to lax oversight. NC, for instance, was found to have illegally purged 6700 voters and ordered to reinstate them, but simply ignored the court order. In NC, WI and other states that provided Trump’s electoral vote win, the numbers of purged voters far exceed his margin of victory.

And all of this was made possible in part by the three Supreme Court decisions gifted to the GOP by conservative majorities: Bush v Gore, Citizens United v FEC, and Shelby County v Holder. 2016 was the first election held after the Voting Rights Act was gutted. Absent that, states with a proven history of racist vote suppression would have been unable to enact such sweeping restrictions to voting rights – and the results speak for themselves. You may call it liberal fear-mongering, but I say, let the facts be submitted to a candid world.

Posted by MZepezauer at 1:58 PM No comments: