This is the second half of the post directly beneath, from the September 2000 issue of the Tucson Comic News: 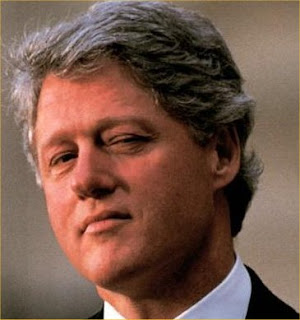 1. Kosovo
You can argue that Clinton inherited a mess in the former Yugoslavia from the Bush Administration. But in the case of Kosovo, the Clinton Administration made things far worse, turning a disaster into a catastrophe. They did this first by arming, funding and training the KLA, the most violent, corrupt and extreme faction in Kosovo, while turning their backs on the pacifist movement of Ibrahim Rugova, which had far more popular support. Then there were the negotiations at Rambouillet, which as one State Department official put it at the time, "deliberately set the bar too high." The Clintonistas hoped that a week or so of airstrikes would force Yugoslavia to comply with our demands for a NATO occupation force. Instead, the week turned into 78 days of increasingly brutal bombing of Yugoslavia's civilian infrastructure, along with far more refugees and casualties than before we got involved. Once we got our way and our troops occupied Kosovo, the KLA ran off virtually the entire Serb population, along with Jews, Gypsies, Turks, Bulgarians, and anyone else, including any Albanians who objected to their thuggish kleptocracy. Kosovo is now overrun with drug traffickers and forced prostitution, while the countryside is littered with unexploded cluster bombs and radioactive uranium shells. And still the killing continues.

2. Welfare Reform
Clinton likes to brag about how successful welfare reform has been, as the welfare rolls decline across the country. But the welfare rolls always rise and fall with the unemployment rate. The real test of the Personal Responsibility Act of 1996 will come in the next downturn, well after Clinton is off chasing Hollywood starlets or whatever his next career will be. And at that point, millions of women and children will find that their right to financial assistance is gone for good. Actually, millions of them are losing benefits already, as the lack of federal oversight has resulted in many states depriving recipients of food stamps and other assistance legally due to them, but not delivered. Many states are simply pushing recipients off the rolls and into dead-end minimum wage jobs, and then spending their federal block grants on other goodies. The real test of welfare reform will come once the boom times are over, but for now, one statistic is telling enough: child poverty has not decreased along with the welfare rolls. Signing the welfare reform bill was a cowardly capitulation, and vetoing it would have reduced his margin of victory over Bob Dole by only a few points. We’ll all live to regret it.

3. Civil Liberties
Did anybody catch Clinton on Roger Ebert's show, schmoozing about his favorite movies? The Prez was favorably impressed with Denzel Washington's performance in The Hurricane. Ebert was kind enough to avoid pointing out that Clinton signed a crime bill which would have prevented the real-life "Hurricane" Carter from successfully appealing his wrongful conviction. Mr. Bill has signed off on a whole series of "anti-crime" and "anti-terrorist" legislation which has pretty much gutted what's left of the Fourth Amendment, along with the right to a writ of habeas corpus.

4. Telecom '96
Even Bob Dole recognized the Telecommunications Act of 1996 for what it was - a massive load of corporate welfare. Of course, he found it easier to recognize wealthfare for once, because of the provisions that benefitted a more Democratic constituency: Hollywood. Over $70 billion worth of broadcast spectrum was handed over free of charge from the taxpayers of America to the broadcast industry. And by removing restrictions on how many media outlets one company can own, Telecom '96 set off a feeding frenzy of mergers and acquisitions in the media market that has yet to abate. Anybody out there think the increased concentration of the media will be helpful to democracy? You can thank Bill Clinton for his signature, which made it all possible.

5. Monica
Okay, it was a great show, much more fun than the OJ trial, but most of us, aside from political cartoonists, would have been better off without it. And if Mr. Willie hadn't been tempted to try splitting legal hairs in front of a federal grand jury, we could have been spared the whole thing. Whether you thought that rose to the level of an impeachable offense (and be honest, that really depended on whether you wanted to see the GOP stick it to Clinton or vice versa), it was an immense waste of time and money, when we could have been turning our attention to more important matters. Sure, the waste wasn't all Bill's fault - that grand jury should never have been asking about his sex life in the first place, and that lawsuit should have been dismissed long before. But he disgraced his reputation forever by lying under oath, and by looking us in the eye, Nixon-like, and denying the obvious.

6. Aspirin Factory
Some argue that the entire Kosovo debacle sprung from a wag-the-dog impulse to change the subject, as so many presidents have done before. At the very least, Clinton's inattention let Madeleine Albright screw things up even worse. But a clearer case for dog-wagging can be made for Clinton's bombing of Sudan as a tenuous "retaliation" for the attack on our African embassies. Coming on the day of Monica Lewinsky's grand jury testimony, the timing was suspicious enough. But the promised "proof" of the supposed connection to Osama bin Laden never arrived, which means that Clinton was essentially lobbing missiles at one of the poorest nations on the planet for no good reason. He's killed more civilians with other operations (see below), but never, has he wielded force more indefensibly.

7. Iraq Sanctions
Since the end of the Gulf War, our sanctions against Iraq (combined with the after-effects of our bombing campaign) have killed more than 1.25 million Iraqi civilians, half of them children. When asked if she thought this level of lethality was justified, Clinton's Secretary of State, Madame Albright, replied in the affirmative. But our sanctions of mass destruction have only served to strengthen Saddam Hussein’s grip on power, while weakening and killing off anyone who would oppose him. We've continued to bomb Iraq and kill civilians, virtually every week now for the past year, because Saddam refuses to allow weapons inspection teams, which he claims are full of US spies. The funny thing is, we've already admitted he's right. By now, former inspector Scott Ritter is claiming that Iraq is essentially disarmed, and the last three heads of the UN oil-for-food program have resigned in protest, saying the US and Britain are blocking needed supplies. You wouldn't think it could get any worse, but we may be headed for yet another full-blown Iraq crisis before Clinton is through. When is enough enough?

8. Timber Policy
Clinton never was much of an environmentalist to begin with back in Arkansas. Few have noted that International Paper was the original owner of the Whitewater land the Clintons bought into back in 1978, and that he's been doing favors for them, just coincidentally, ever since. But you don't have to be a timber company that gives him a sweetheart deal to get favors from Bill Clinton; any kind of timber company will do. He came into office hosting a telegenic "timber summit" during which he felt the pain of both sides - then went on to increase the pain of those who cared about old-growth forests. His infamous Option Nine allowed clear-cutting in threatened habitats, and his appointed Forest Service officials have approved more timber sales than any administration in history. Corporate welfare to the timber industry is currently estimated at over $3.3 billion a year The final straw came when Clinton signed the GOP-backed "salvage rider" in 1995, which doubled the previous year's timber sale on federal lands, exempting it from compliance with environmental laws or the Endangered Species Act.

9. Soft Money
Okay, Bill Clinton didn't invent the soft money loophole; he just raised it to an art form. By channeling unlimited contributions to the Democratic Party instead of to his 1996 campaign, Clinton opened the floodgates to the torrent of soft money being raised by both parties in this election cycle. Republicans, shocked - shocked! at such malfeasance, demanded that Attorney General Janet Reno appoint yet another special prosecutor. But as the saying goes, the real scandal in Washington is what's legal.

10. Trade Policy
I said earlier that Clinton's health-care debacle may have brought us the GOP Congress; that's the conventional wisdom anyway. But a better explanation is NAFTA. By cutting deals with the then-minority GOP to pass the so-called "free trade" agreement, Clinton alienated labor, environmentalists and the left in general, many of whom were alienated enough to sit out the 1994 elections. Since then, labor has been willing to get out the vote for Clinton, and the GOP has lost seats in the last two elections. Which shows how labor has fallen again for the old good-cop/bad-cop routine. Clinton went on to negotiate the even more odious GATT treaty, now being used to dismantle environmental regulations worldwide. He lost the vote on fast track authority, but has gone on to champion free trade deals for China and Africa, all the while cheerfully ignoring his campaign promises to make sure the environment and labor rights are not left out. Now, of course, Al Gore is promising the same thing. Anybody wanna buy a bridge to the 21st Century?

Posted by MZepezauer at 1:15 PM