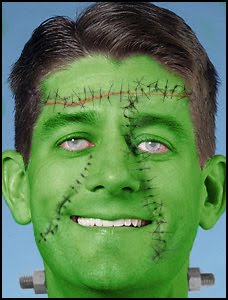 While in California, I had the opportunity to peruse an article in the Weekly Standard, entitled "The Democrats' Fuzzy Math: Yes, Paul Ryan’s Medicare Plan Would Lower Costs."

The author, Jeffrey H. Anderson, cites a number of statistics to make the case that Medicare is not such a great deal compared to private health plans – contrary to both conventional wisdom and CBO reports. And hence, he argues, the GOP's Ryancare proposal will be likely to bring down health care costs by forcing Medicare to compete with the mighty free market for its beneficiaries' (voucher) dollars.

It struck me that Anderson's argument was somewhat disingenuous, but I couldn't quite put my finger on it until I had had an opportunity to sit down and ponder it at length. The thing is, he bases his claims on his own think-tank study, which shows that the costs of Medicare, as a share of GDP, have risen much more than other health care costs over the same period.

So there are a couple of problems here. First is that he used the years 1970 through 2008 to make his comparisons. Anybody catch the weasel? That's right – there was a huge GDP contraction in the year 2008 (including a wrenching 7% drop in Q4), coinciding with the onset of the Great Recession. Not only that, but given the rate of job losses that year, more and more people were being forced into reliance on Medicare and Medicaid, even if they might have preferred to put it off a few more years. So naturally the costs of covering these people, as a share of a diminished GDP, are going to look much higher if you use that particular year as a comparison.

As you might guess, these folks tend to use health care services a lot more than your average John Q. Public, and their costs are considerably higher as well. So it's doubly dishonest to claim that Medicare costs are out of control when the aging of the US population is the chief culprit. Anderson tries to weasel that as well, saying that it cost more to treat the elderly in 1970, too. But in both 1970 and 2008, private health care plans didn't need to treat very many elderly people, precisely because Medicare was available to them.

Republicans have been saying that Ryancare simply needs a better marketing job for the public to get over their overwhelmingly negative view of it. But this is straight out of How to Lie With Statistics. If they have to rely on this kind of chicanery to make their case, it doesn't inspire much confidence for its implementation. Gawd forbid.
Posted by MZepezauer at 5:18 PM