The Libya Chapter
The Libya Ambivalence
Toward a Shallower Ambivalence
Libya: He's a Rebel
Libya: Qadaffy's Defenders
Libya: Place Your Bets
Libya: Friends Like These

In previous posts, we've explored some of the principal objections to the kinetic activity in Libya: uncertainties about the rebel forces, the strength of Qadaffy's support, the unpredictable nature of the outcome, and the hypocrisy of supporting violent repression in other Arab lands. 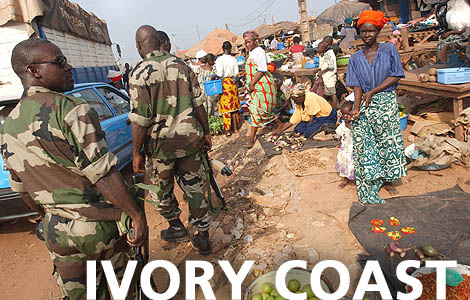 It's been said we couldn't just "stand by" and watch Qadaffy slaughter his opponents. In the cases of Bahrain and Yemen, we not only stood by, but held their coats for them while they did the job with our weapons (albeit on a smaller scale than Colonel Q). But the flip side of that hypocrisy is that we are also standing by and watching slaughter on a comparable or larger scale, in lands that don't happen to sit above crude oil supplies - or create refugee flows into Europe.

We have certainly stood by and watched similar abuses in Myanmar, Eritrea and Turkmenistan, to name a few. There were no UN resolutions to impose a no-fly zone in Darfur, for example. And while the civil war in Libya may have led to thousands of deaths so far, deaths in the Democratic Republic of the Congo number in the millions.

Supporters of the Libya intervention argue that military intervention in all such places would not be feasible, and would have less chance of success than the current campaign. But the chances of success in Libya are far from assured, and as Matthew Yglesias has argued, nonviolent uprisings have as good a chance at succeeding, and generally lead to better outcomes. The uprising in Libya, in contrast to those in Egypt and Tunisia (and Bahrain) was not nonviolent from the beginning, and seems to have been quickly co-opted by more violent factions.

Moreover, the very fact that the rebels called on us for help shows that they are both politically weak (unlike the broad-based Egyptian movement) and militarily outmatched. Such a situation virtually demands mission creep if the desired outcome is indeed regime change. Simon Jenkins argues that by intervening in Libya, we are merely prolonging the conflict:

Holding the ring for someone else's civil war is a bizarre justification for intervention. It is a distortion of the UN's peacekeeping role – indeed it might be termed war-keeping – and an abuse of Nato's supposed purpose, to defend the west against attack. Even setting those objections aside, any humanitarian gain is moot. Iraq and Afghanistan were Muslim dictatorships in a state of suppressed civil war when the west intervened. The result was hardly peace, tranquillity or an easing of tribal tension, rather more destruction and bloodshed. Yet these interventions were claimed as "humanitarian".

Beyond all other obvious hot spots where we stand by and watch, the one that has provoked the loudest charges of hypocrisy on the part of the Libya intervenors is the Ivory Coast. Human Rights Watch has even reposted a Foreign Policy article by Corrine Dufka, explicitly calling for humanitarian intervention there:

The signs of an impending tragedy are plain for the world to see. On Feb. 25, Gbagbo's youth minister and close confidant, Charles Blé Goudé, called on "real" Ivoirians to protect their neighborhoods and chase out foreigners, a scarcely veiled threat against northern Ivoirian ethnic groups that tend to support Ouattara and immigrants from neighboring countries, as well as the U.N.-authorized peacekeepers and French troops. Blé Goudé's militia supporters have heeded the call. Some victims have been burned alive or beaten to death, while attackers have looted other victims' shops, destroyed their homes, and told them to leave their neighborhoods -- where many have lived for decades -- or be killed. Since late February, some 700,000 Abidjan residents have been displaced from their homes due to fighting and reprisals.

The impending tragedy she refers to has only intensified since publication, and appears to be reaching some sort of endgame for the Gbagbo regime, though future stability is far from guaranteed. Arguably, the chances of success there would have been far greater than in Libya. The rebel forces have a legitimate claim to power, and are well mobilized. A firmer diplomatic response from the outset of the crisis, or even the credible threat of force (though such bluffs can always be called) might have diminished Gbagbo's intransigence. That, we will never know.

But the Ivorian situation also illustrates the limits and dilemmas of humanitarian intervention. The rebel forces are also accused of atrocities, and there is an ethnic dimension to the conflict that is not easily resolved within existing borders. Ultimately, the nature of sovereignty and the legacy of colonialism makes self-determination problematical all across the planet, and military solutions tend to exacerbate the problem. Moreover, Ivory Coast also shows the limits of relying on international law and institutions like the UN. In this case, grumblings from Russia and South Africa helped prevent a coordinated response. Getting permission slips from all stakeholders, as we did in Libya, is a rare confluence of mutual interest and/or disinterest, and not one to stake a doctrine on.

What we're left with is not likely to be satisfying to anybody. Dr. Peace says we should have followed her advice a long time ago. Just like crime prevention, diverting a fraction of the world's military budgets toward actual humanitarian relief would go a long way towards preventing future conflicts. Bolstering skilled mediation and diplomatic resources would also make more sense than sending in the jets once things have gotten out of hand. And of course, refusing to sell bombs to dictators is something we haven't tried to hard so far.

As Jon Walker and others have argued, the opportunity costs of this intervention continue to mount. In a time of strapped budgets, we always seem to find the resources for war - even if it ends up erasing whatever meager budget savings we fought out over the past few months. Others argue that there would also have been opportunity costs to standing and watching Qadaffy retake Benghazi. The fact is that there are no easy answers once the slaughter has begun. There are only endless questions. But it remains a debate worth having.
Posted by MZepezauer at 10:42 AM