Toward a Shallower Ambivalence 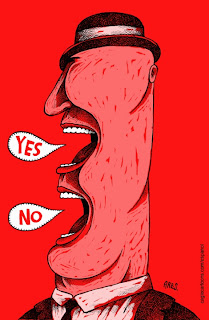 I confessed yesterday to a deep ambivalence about the Libya intervention, despite my knee-jerk near-pacifism. If this is the war that ends up causing more good than harm, it'll be the exception that proves the rule. But the more I read about it, what grows deeper is not my ambivalence, but my skepticism.

My current bottom line – and I haven't reached bottom yet – is that while I have a bad feeling about this, I'm not out protesting in the streets. Yet.

I'd like to be wrong about this, and see a quick ouster of the dictator and a transition to democracy. But there's no shame in urging caution in the face of carnage.

But to argue, as I did yesterday, that this time we have more justification than Bush in Iraq, or Clinton in Kosovo is, as Matty points out, setting the bar pretty low. And I set the bar pretty high when it comes to justifying the use of military force. "They haven't lied to us this time" makes a poor battle cry – and I'm not sure it's an accurate one, either.

The principle objections raised so far include:

1. The faction we're supporting are no angels.

3. Thus we're intervening in what could be a protracted civil war.

4. Our support for repression in Bahrain and Yemen, and

5. Our reluctance to intervene in Ivory Coast raises charges of hypocrisy.

7. Finally, it's not clear that alternatives to military action were exhausted before the intervention began.

I'll take these one at a time in a series of posts, making sure to consider responsible opposing viewpoints – and even some irresponsible ones. Meet me back here.

UPDATE (3/31/11): Upon reflection, the seventh point originally listed here ("Finally, we have no guarantees that whatever government emerges in Libya post-conflict will be an improvement") is very much like the first point, covered in my 3/27 post. So instead, I've decided to replace it with an equally salient objection: "It's not clear that alternatives to military action were exhausted before the intervention began."
Posted by MZepezauer at 6:16 AM