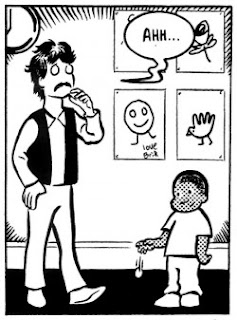 One of the things I discovered when I first began teaching was how much I enjoyed hanging out with teachers. They are, by definition, smart people with big hearts. Right now I'm really enjoying being a substitute, teaching everything from kindergartners to high school seniors. It's quite the smorgasbord. And everywhere I go, I find smart, big-hearted teachers. Who are, of course, sucking our country dry with their bloated salaries.

Lately, I just finished reading two very different books about teaching. The first, by Robert Wilder, is called Tales from the Teachers' Lounge: An Irreverent View of What It Really Means To Be a Teacher Today. Wilder has a breezy comedic style, reminiscent of Dave Barry ( my favorite simile: "nodding off like Courtney Love in a custody hearing"). He lovingly runs down the various foibles of the folks who take on the work of teaching "other people's kids," along with the various challenges one encounters along the way: those other people, the wide range of human behaviors exhibited by their kids, and the well-meaning teachers who have followed the Peter Principle up into the administration of our schools. It's a million laughs, and you don't need to be a teacher to appreciate it - it's enough to have been taught by one.

The other book is a nonfiction graphic novel - ah, hell, a comic book - called To Teach: The Journey, in Comics. It's a collaboration between award winning cartoonist Ryan Alexander-Tanner and longtime educator William Ayers*. And it's a genuine collaboration, in that Alexander-Tanner wrote some of the text and Ayers consulted on the illustrations. It's an adaptation of Ayers's earlier work To Teach: The Journey of a Teacher, which they quickly discovered was too heavy on theory to convert easily into a narrative format. So they told the story of Ayers' early years as a kindergarten teacher (and let me tell you, those people do not get paid nearly enough!). It's augmented throughout by interviews with other veteran teachers, all of whom help to sketch out Ayers' humanist approach to education. Well worth reading, whether you're a teacher, or have children who are taught by them.

*William Ayers is, in fact, the same William Ayers who very nearly succeeded in conspiring with Barack Obama to foment a marxist takeover of our economy, before he was exposed by Sean Hannity's fearless crusade for the truth. However, that has as little to do with the value of the ideas in this book as it did with who was qualified to be elected president in 2008.
Posted by MZepezauer at 1:11 PM