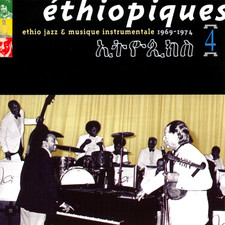 
Astatke (or Astatqé) is an Ethiopian musician who studied at the Berklee College of Music. Inspired by Latin jazz, he returned to his homeland and released a series of landmark recordings in the 1970s, before fleeing due to political upheaval. His work has become known to Western ears mainly through the excellent Ethiopiques reissue series, of which Volume 4

is devoted to Astatke. Lately he's been recording with the British band the Heliocentrics; this recording is from 2009.

The High Llamas are Brian Wilson disciples. You can hear it every time those massed background vocals break into their oohs and ahhs. This mixes with jazz, lounge and funk influences – as well as the bloops and bleeps of synthesizers, reminiscent of Stereolab (who are actually collaborators with some of the oeuvre). Their eleventh album was released this month.

The Wombats, on the other hand, seem to have attended the Ray Davies school of rock. These Liverpudians are one of a number of recent British bands with a wry sense of humor and deft character studies. The Streets, Art Brut, and the Arctic Monkeys, among others, are kindred spirits.

PiL is what John Lydon decided to do with his time after "killing off" rock music, and in its own way,  it was almost as influential as the Sex Pistols. Rock, of course, continues to fulfill the prophecy of Danny and the Juniors; Lydon simply midwifed its rebirth. But he also midwifed post-punk, and begat dozens of bands more indebted to Can, Faust, Beefheart and, er, the Red Krayola, than to Chuck Berry and Hank Williams.

I had the great fortune to see Bowie run through his greatest hits ("for the last time"), including this one, with Adrian Belew on guitar (instead of Stevie Ray Vaughn, as on the original). Belew damn near stole the show, no mean feat with David Bowie on the same stage.

Finally, I remember live-blogging a Matthew Sweet show back in the 90s in a club with a cyber cafe in the same room as the stage. Pre-show I was googling his name to see what I could see, and found him looking over my shoulder at his own fan pages. I think that piece may be lost to the digital mists, but I'll try to find it for reposting. It was a killer show, even without Robert Quine on guitar, as on Sweet's outstanding 90s recordings.
Posted by MZepezauer at 10:55 AM