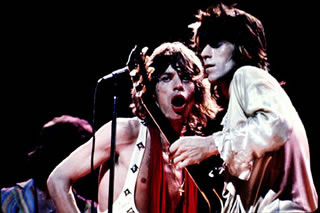 Lately I've rekindled my friendship for the Stones. It started with last year's Exile on Main Street reissue, and picked up steam with the Keef memoir. Now I've got a copy of Ladies and Gentlemen the Rolling Stones, and as the saying goes, it rewards repeated listenings. Quite simply, this is the Stones at the peak of their powers.

That's not to say that it was all downhill from here (the '72 tour promoting Exile); there were plenty of peaks and valleys to come. But none of those peaks ever quite reached this altitude again.

I remember seeing this film during its brief theatrical engagement in 1974. There were huge JBL speakers stacked in the movie theater for quadraphonic sound, and souvenir programs, shirts and satin scarves sold in the lobby. Although I didn't know it at the time, the Stones had hired sound engineers to travel with each print, tweaking the mix for individual theaters and showings, depending on the size of the audience. Everything was done to convey the atmosphere of a concert experience, and the atmosphere of course grew smokier as audiences made their own contributions to the gestalt.

It was hugely expensive, and consequently the theatrical run was a brief one. For various reasons, the film was not seen again until its DVD release in 2010. But back in '74, it was a larger than life experience.

In contrast, when I actually saw the Stones in concert the following year, things had changed. Mick Taylor was gone, and with all due respect to Ron Wood, it will never be the same. But equally salient is that we were in a football stadium, and the Stones were scattered across a stage bigger than your house. I pressed as close to the stage as I dared, because in those pre-jumbotron days, that was the only way to get a good look. Don't get me wrong – it was a great show. The songwriting team had three more years of strong collaborations to add to the set list. And it ended with not only a fireworks display, but a helicopter drop of confetti, balloons and inflatable sex dolls.

No, that was nothing at which to forcibly expel nasal mucous, But still. Pop in that DVD and watch the Stones working a smaller, indoor stage, the Glimmer Twins leaning into a single mike to harmonize. Drink in those Mick Taylor solos. Dig that Bobby Keys/Jim Price horn section. Play it loud.

In an accompanying 2010 interview, a wrinkly Sir Michael, in between fashion critiques of the '72 band wardrobe, opines that in his recollection, the Rolling Stones could be rather sloppy in those days. "Obviously that was not the case here," he adds. But the revelation of L&GTRS is that any band could be so loose and so tight at the same time. It's Charlie, of course, who allows Richards and Taylor  the freedom to get sloppy as the mood befits, and still swing like a low-information voter.

This is the Stones before they graduated to the big arenas and Broadway-designer stage sets. This is Mick before he became a parody of himself - or somewhere along the continuum, anyway. In "All Down the Line," he's in fine, robust voice, as good as he ever got. It's great to hear him work "Gimme Shelter," "Tumbling Dice" and "You Can't Always Get What You Want" without any backup singers, giving each song a much rougher feel than in subsequent outings (on the latter tune, Price's muted trumpet stands in for the elaborate studio arrangement).

Sure, you can stream it for 3 bucks

, but do yourself a favor. Obtain the coded disc, and run it through your own stack of speakers. Put on your glitter and satin, enhance your mood as you see fit, and watch them earn the title of "World's Greatest Rock 'n' Roll Band." It never got any better than this.
Posted by MZepezauer at 9:46 AM