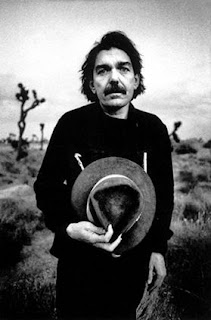 The National Recording Preservation Board of the Library of Congress just announced another 25 recordings that are "culturally, historically, or aesthetically important, and/or inform or reflect life in the United States." This year's list includes Lydia Mendoza, the Boswell Sisters, John Fahey, De La Soul, Tammy Wynette, Steely Dan – and an actual surviving recording from 1853.

Tucked in along with these other worthies is the late Don Van Vliet, AKA Captain Beefheart, honored for his 1969 recording Trout Mask Replica. As the board put it:

Are you listening, R&R HoF?

Congratulations to Mr. Van Vliet's surviving family; truly he belongs to the ages. Too bad he had to share this honor the same year as Newt Gingrich. Well, ain't that America?

Oh, and one other notable recording was the one to which the Dude abided in his bathtub. You know the one I mean..
Posted by MZepezauer at 8:30 PM