Five years later, and I don't think I've seen another political cartoon that pissed me off as much as this one...so congratulations, McKee! 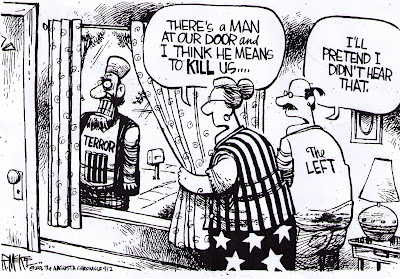 After 17 years in the political cartoon business, I thought I’d seen it all. But I can’t remember seeing as disgraceful a cartoon in an American newspaper as Rick McKee’s depiction of “The Left” choosing to pretend there is no terrorist threat (see above). Okay, I can think of some that were equally disgraceful, but none that were more so.

Look, I understand how political cartoons work. They’re supposed to provoke, anger, exaggerate. Many times I’ve found myself ticked off when some cartoonist deftly skewers my point of view–and then I have to catch myself and smile. But this is different, and I think I can explain why I think McKee’s cartoon crosses the line.

Branding millions of Americans as oblivious to the terrorist threat erodes the unity and resolve we require to actually meet that challenge–unity that the president has squandered by allowing Karl Rove to use terrorism as a political football. It doesn’t advance any kind of rational or debatable argument; it isn’t even based in fact. No “leftist” holding elective office or even spouting opinions to anything other than four-figure audiences believes anything remotely similar to that.

Of course, they’ve been politicizing 9/11 for a long time, most egregiously when sponsoring an ad morphing the face of a triple-amputee war veteran Senator into that of Osama bin Laden, simply because the former favored a slightly different version of the Homeland Security Department legislation than did the Great Uniter.

Recently, Dick Cheney, setting up yet another straw man, claimed that “critics” thought that withdrawing from the Iraq war would persuade terrorists to leave us alone. But the White House spokesmuppet couldn’t cite a single Democrat who has proposed any such thing. Senator Liddy Dole was similarly flummoxed when asked to back up her allegation that Democrats think terrorists can be “appeased.” She changed the subject.

I called up Rick McKee in his office at the Augusta Chronicle, wanting to hear his side of the story. But he, too, failed to name a single representative of “The Left” who says we should ignore terrorism in hopes it will go away. “Pretty much all of ‘em,” was his answer. “If you’re a liberal and you think we should be fighting the war on terror,” he explained, “you’re pretty much the only one.” Just like Dole and Tony Snow, he instead switched the subject to minute differences of opinion over the Patriot Act, as if Osama were personally funneling cash to the librarians’ lobby in preparation for the final push.

I argued in vain that no American wants terrorists to succeed, that we simply disagree about the best way to prevent that. In retrospect, out of all the colossal blunders from the Bush White House, this effort to cast honest dissent as appeasement is the most pernicious. It prevents us from having a clear and honest debate about what’s best for our country and the world.

McKee claimed that “The Left” favored the wussy “law enforcement approach” to terrorism, as enunciated by the last Democratic presidential nominee. Apparently he missed the admission by prominent conservatives that Kerry was right, in light of the British success in foiling a terrorist plot using those methods–methods, I might add, that included the use of warrants.

But, you know, it’s kind of beside the point whether gay-bashing conservatives or latte-sipping liberals think detective work and intelligence gathering are more effective methods of combating terrorism than, say, invasions of large Muslim nations unrelated in any way to al-Qaeda. The point is, putting resources into investigative work is not the same thing as ignoring the problem. Which sort of makes your cartoon a lie, Rick.

My conversation with Mr. McKee took place a few days before Rove’s latest gambit: yanking a few high-level al-Qaeda prisoners out of secret prisons overseas and transferring them to Gitmo for military tribunals. The idea was to ram a Torture Legalization Act through Congress, insisting that any sissified Democrat who opposed enacting this bill right away this minute before the election, well, wanted the terrorists to win. Hey, it’s worked before.

As if reading a fax from Rove’s office, McKee fulminated that “giving civil liberties to terrorists is going to get us all killed!” Big sigh. Once again, it’s almost beside the point to note that, without due process, you can’t actually tell who is and isn’t a terrorist. Or that respect for things like “freedom and liberty” is ostensibly what we’re trying to instill in the Muslim world by occupying Iraq. And that maybe, just maybe, this wouldn’t be nearly as controversial if the Administration hadn’t already been caught herding completely innocent suspects into these secret detention camps, or rendering them to foreign countries for torture. So we’re just supposed to take their word for it from now on?

No, the point is that the key opposition to the bill came from one of the Senate’s most seasoned military experts, another Senator who had served his country as a tortured POW, and another who had spent a career in the military as a JAG. Oh, and one who had been a four-star general, Chair of the Joint Chiefs, Secretary of Defense, and Secretary of State. That would be Warner, McCain, Graham, and Powell, none of who can be included in “The Left.” Which sort of makes your cartoon a lie, Rick.

Last spring I taught a course on the history of political cartooning. My students were eager to hear my views on the “Mohammed” cartoons controversy. My view was that they were an abuse of free speech; that while the paper had every right to print them, doing so did more harm than good.

I feel the same way about Mr. McKee’s unfortunate work. It’s the graphic equivalent of yelling “fire” in a crowded theater. It harms our security more than any fictitious pony-tailed liberal ever could. “Well,” he told me, “that’s just my opinion." In response, I quoted the late Senator Moynihan: “Everyone is entitled to their own opinions, but they are not entitled to their own facts."

Here are some facts: "The Left" constitutes anywhere from forty to sixty percent of the American people, depending on whether your definition of leftist is “believes in progressive taxation and being nice to gay people” (minority view) or “believes that invading Iraq was a really really bad idea and wishes we hadn’t done that” (majority view). Within the range of the left, there are widely disparate views about the best way of combating terrorism, as there are on every subject down to whether or not a particular brand of tofu is actually organic or not. Most leftists, though, tend to believe that terrorism is a bad thing whether it’s sponsored by US allies like El Salvador or Guatemala, or by US enemies like Iran or Syria.

There is a broad consensus that combating stateless terror groups would require both a carrot and stick approach. That is, that success would include not just capturing or killing actual terrorists, but preventing al-Qaeda from increasing the miniscule percentage of the world’s 1.2 billion Muslims who sympathize with bin Laden’s analysis and goals. At this task, Bush has been a spectacular failure; he has, in fact, done just the opposite. And, needless to say, it ain’t just the ponytailed left who think so.

Under Bush’s watch, incidents of terrorism worldwide have quadrupled since 9/11. McKee, spouting Rovian Talking Point #346, counters that none have taken place on American soil. That’s great, but plenty of Americans have died in those overseas attacks, and a four hundred percent jump is not exactly evidence of a successful approach or a weakened adversary. Al Qaeda has morphed from a handful of lunatics in Afghanistan to widely dispersed and loosely affiliated handfuls of lunatics all over the world, along with controlling nearly the entire western third of Iraq (up from, let’s see, zero percent pre-war).

McKee’s ugly hate speech is offensive, but let’s face it, this is basically the GOP’s fall election strategy. Democrats want terrorists to kill, you, so vote us. Rove’s strategy will work again unless the party of ”the left” forcefully refutes it. Taking the congress won’t undo the divisions inflicted on America by this Administration, but it will restore some checks and balances.

This is what needs to be said: Bush has made us less secure. He has aided and abetted the terrorists by botching this country’s response to 9/11. He cleared brush on his ranch while the threat grew, he allowed al-Qaeda and Osama to escape, he diverted special forces out of Afghanistan when they were needed most, he squandered our credibility by invading Iraq based on lies, he spent trillions that were needed to shore up our defenses at home, he alienated the Muslim world with Abu Ghraib and Gitmo, he underfunded port security and protection of our chemical and nuclear plants, he misdirected Homeland Security cash into rural backwaters, he showed the world our emergency responses were crippled while an American city was inundated, he shipped our first responders into an overseas quagmire, he demoralized our intelligence services by leaking methods and sources for political gain, he demoralized our armed services by failing to give them adequate body armor, he lowered our recruiting standards to fill quotas for a disastrous war effort, he funneled war profits to well-connected contractors with no oversight, he sent inexperienced college kids to run the occupation, and last but not least, he used terrorism to divide Americans from one another in order to win elections.

And that, my friends, we ignore at our peril.
Posted by MZepezauer at 4:22 PM