Here in 2011, old Clarence Thomas has authored "one of the meanest Supreme Court decisions ever," telling a former death row inmate in Louisiana that, even if he was wrongfully convicted, he has no right to collect damages because the prosecution didn't engage in a "pattern of misconduct." And that's life in this here modern America. 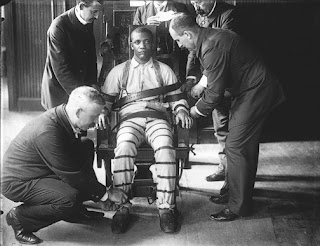 Like I said, if you oppose the death penalty, you don't have a candidate in the presidential sweepstakes, at least not the kind the corporate media call “viable.” Capital punishment is still pretty popular in these here United States, though perhaps not as vastly popular as a few years ago. Many ardent legal snuff fans are beginning to have their doubts.

Thirty five or so years ago, the vast majority of Americans opposed the death penalty, and it was being phased out in civilized countries across the globe. In the 70s, the Supreme Court, not yet fully mediocritized by GOP appointees, found capital punishment as practiced then to be unconstitutional. But they left the door open for a return to the juice and the noose if the states wrote some new laws. As crime statistics rose along with a demographic increase in the number of young males, politicians demagogued the issue for all it was worth, and the death penalty became popular again.

Fast forward to this year, where the governor of Illinois. a rightwinger who still supports the death penalty, called for a moratorium in his state until they can figure out why they have had to release more innocent people from death row than they succeed in icing. President Clinton was invited to follow suit on the federal level, but demurred – hardly surprising from the guy who jumpstarted his 1992 campaign by executing a brain-damaged prisoner (who asked that the leftovers from his final meal be kept for him until he got back). Of course, Bill may he a cynical bastard, but at least he's never had the poor caste to publicly mock a prisoner's plea for mercy; we have Shrub Bash to thank for that new low in national tastelessness.

But those innocent folks are starting to be a bit of a PR problem. Researchers have found at least 23 cases of the wrong guy being executed during the bloody old 20th century, with at least four over the past decade: two in Virginia, one in Texas and one in Florida. But even Arizonans have no reason to be smug. Anybody remember Luis Mata, sent to the next world with your tax dollars a few years back? Many observers think he took the rap for his brother, who is serving life. Guess we'll never really know for sure.

That's the problem with the judicial system: it's not an exact science, as anyone who's ever served on a jury can tell you. And do let's take a look at out neighbors to the west, where the city of Los Angeles is saving up its pennies to pay out up to $200 million to the folks framed and unjustly convicted by their local police and prosecutors. A couple of recent movies help illuminate the issue as well: The Green Mile does a great job of showing the sheer horror of a botched execution by electric chair (still used exclusively in three states), and The Hurricane tells the true story of a black man framed and imprisoned for over twenty years. Recently Mr. Clinton sat down for a chat with movie critic Roger Ebert, singling out the latter film for the drama of Rubin Carter's quest for justice. Ebert was too polite to point out that the crime bill Clinton signed in 1994 would have made Carter's successful appeal impossible had he tried it today.

There are Rubin Carter s all over America, some of them on death, row, and his story spotlights how strongly police and prosecutors wish to avoid admitting they've made a mistake. New DNA technology is springing many of the wrongfully convicted from prison, but many states are fighting against the automatic right for prisoners to have a DNA investigation to determine innocence. Most likely they're looking to avoid having to pay out the kind of big bucks LA is looking at for wrongful conviction lawsuits.

If states and cities are making mistakes (or worse), the feds, under Clinton's leadership, are increasingly washing their hands of it. It still costs more to execute a prisoner than to jail one for life, owing to the comprehensiveness of the appeals process (which I’m sure you'd appreciate if you were ever wrongfully convicted of a capital crime). But politicians at all levels are looking to streamline the process, despite the lower crime rate (corresponding to the demographic decline in the number of young males, not anybody's get tough approach). And of course, the Supreme Court has ruled that it's now perfectly constitutional to execute an innocent person as long all procedural rules have been followed. Evidence of innocence introduced after the original trial is often ignored. But most people who get his death penalty these days have one thing in common: the attorneys who defended them at their original trial are among the most incompetent in the nation.

Since the legal snuff option applies, de facto, only to the poor, death row is fell of folks whose lawyers slept through trial, failed to question key witnesses, or left outrageous prosecution arguments unchallenged. After that, well, don’t bother us; you've had your fair trial.

Of course, many of the folks on death row have something else in common: they’re not white. Plenty of them are palefaced, sure, but people of color are disproportionately executed in the US. More to the point, death row inmates, whether white, brown, black, or otherwise, are overwhelmingly the convicted murderers of white people. Bemuse of the racial disparity in both convictions and victims, if we had a Supreme Court like the one we had in the 70s, capital punishment would most certainly be found unconstitutional once again. But instead we have these yahoos in judicial robes who turn their backs as the death chambers fill up.

I know there are people of good will who hold the death penalty to be justified. Let me just stand on a bit of common ground with you: there may well be human beings whose crimes are so heinous that they don't deserve to live; Jeffrey Dahmer would he she obvious poster child, am I right? But l don't want our government to have the power to make that determination; if you grant that power, too often we will end up executing the politically dissident, like Sacco and Vanzetti, the Rosenbergs or Mumia Abu Jamal. And for these of you convinced by ABC's hatchet job that Mumia is guilty, there is plenty of exculpatory evidence that they ignored, Even if he does turn out to be guilty, his case has been handled so grossly that justice demands a new trial).

But even if you grant the heinous crime exception, it's impossible to design a foolproof and fair capital punishment system; as you may have noticed, it's hard to reverse a capital sentence once it’s been carried out. And take another poster child, Timothy McVeigh. Let’s leave aside the question of whether we’ve gotten the whole story in that particular case (though it will be that much harder to do so once McVeigh begins assuming room temperature). We can all agree that the enormity of that crime is the closest thing to unforgivable we’ve ever seen.

And yet. if you like, you can hear from the father of one of the victims who begs to differ. On Tuesday, March 14. at 7pm, the St. Frances Caprini Church at 3201 E Presidio will host Bud Welch, who has come to oppose the death penalty despite the devastation of his family’s and his community’s loss. On the same program is James Hamm, convicted of murder as a young man, who earned a law degree in prison and was later paroled. Because he was not written off, he has had a second chance to contribute to society. The Coalition of Arizonans to Abolish the Death Penalty (CAADP) is sponsoring the event; their website contains plenty of links to useful information on the topic.

You can also find out more about the barbarous injustice of the death penalty at the Death Penalty Information Center website. It's run by one of Ralph Nader's organizations, in case you’re still shopping around for a presidential candidate you don't have to hold your nose to vote for.
Posted by MZepezauer at 6:52 PM