This was my yawp of indignation at the confirmation of Clarence Thomas. I believe the intervening decades have tended to validate my concerns for the future course of civil liberties and the nature of Justice Thomas' brand of jurisprudence. The judge has been in the news of late, beginning with his wife Ginny demanding, in vain, an apology from Anita Hill (apparently Ginny never read Jane Meyer's book). Then there was the dustup over his meetings with the odious Koch brothers. Next came the scandal over the unreported income from Ginny's gig at the (Koch-financed) Heritage Foundation. Now the latest is that Clarence himself failed to disclose in-kind contributions he received during his confirmation battle - contributions which came from a little outfit called Citizens United.


It takes a lot to get kicked off the Supreme Court (especially given GOP control of the House). And maybe it should. But that's all the more reason we should be a lot more careful about who is seated there in the first place. 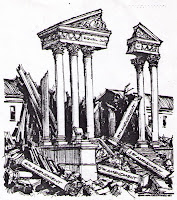 The elevation of Clarence Thomas to the United States Supreme Court could mean the beginning of the end of the Bill of Rights - ironically enough, in its bicentennial  year. By any reasonable standards of jurisprudence, the man should never have been nominated in the first place, given his undistinguished judicial record. Adding insult to injury, the gutless wonders who sit on the Senate Judiciary Committee should never have allowed him to get away with the arrogant prevarication he displayed in the first round of hearings. Thomas should have been rejected on the basis of his record and his judicial philosophy - long before there were any sexual harassment charges to sweep under the rug.

The real tragedy of the Thomas affair is that the Supreme Court is already dangerously out of balance, dominated by rigid ideologues and political hacks who have shown no reluctance do violence to the Bill of Rights - particularly since William Brennan was replaced by David Souter. It is truly frightening to think of Thomas, a man who was willing to disavow previously stated positions in order to win confirmation, sitting on the same bench as intellectual bullies like William Rehnquist and Antonin Scalia.

It was only the most recent in a long series of bald-faced lies from George H. W. Bush when he told the country that Thomas was the most qualified man for the job, and that race played no factor in his selection. This dishonesty set the tone for the confirmation process, a sickening replay of the David Souter and Anthony Kennedy hearings. Americans rightfully rejected the nomination of Robert Bork in 1987 because they found his attitudes repugnant. The cynical response from the Reagan/Bush administrations has been to send down a series of Stealth Candidates who evade inquiries into their judicial philosophy lest they too be rejected. It is transparent hypocrisy for the White House, after coaching Judge Thomas to blather on about his grandfather’s influence on his character, to then complain when opponents focus on his character.

It wasn't always like this. FDR, Truman and Eisenhower all nominated justices from the opposition party for reasons of balance and consensus (of course, that was back when we had an opposition party). Prior to 1955, only two Supreme Court nominees were ever asked to testify on Capitol Hill - there was no need, since their reputations and records were well known. Now we are faced with Thomas, blessed with the lowest evaluation ever given a High Court nominee by the American Bar Association, asking us to believe that he has never discussed Roe vs. Wade - the most controversial decision of the last 20 years - with a single human being.

When the Senate Judiciary Committee was asked to consider such a nominee, they should have laughed him back to the White House. It is not that he had less than four years of experience as a federal judge (and no judicial experience before that). Several Justices have performed admirably without prior service on the bench – but they all had proven track records in other capacities. Thomas’ disgraceful record at the EEOC, where he ignored thousands of claims o0f discrimination, should have disqualified him from day one.

One thing both supporters and opponents of Thomas agree on is that the second round of confirmation bearings were a revolting travesty. If Professor Hill's allegations had been taken seriously in the first place, it would never have been necessary; instead, the Committee let the matter drop after the FBI called the charges inconclusive - even though Hill had someone to corroborate her claim. When the Senate was forced - due to the outrage of American women - to reconsider Thomas' nomination, the Democrats buckled in cowardice beneath the predictable Republican PR onslaught. Unwilling to challenge this evasive mediocrity with a fraction of the vehemence with which the GOP attacked Hill, they merely compounded their original errors in judgment.

If his record - or lack of same - was not too much for the Senate to swallow, it should be no surprise that no one was willing to press Thomas on the question of the Lincoln Foundation. Thomas sits on the board of this right-wing think tank, whose chairman  – a paid lobbyist for the Apartheid government of South Africa - serves on the board of the World Anti-Communist League. WACL is an umbrella organization for hardcore fascist groups, including many living Nazi war criminals and the most prominent of the death squad lenders in Latin America. Thomas' response to questions about South Africa was - you guessed it- that he had no idea. To my knowledge, be was never asked about the WACL.

The salient lesson of this whole farce is that Clarence Thomas is the culmination of the wholesale corruption of the judicial branch of the government. A majority of the federal bench has been appointed by presidents accused of the most appalling high crimes and misdemeanors. Each of the last six executives have been implicated in a parade of nauseating and poorly investigated scandals: the cover-up of the JFK assassination, Watergate, Iran-contra, the October Surprise, the S&L debacle, the nascent BCCI scandal, and a whole series of illegal wars. The legislative branch is scarcely better; most anyone with a modicum of integrity having been long since chased from office by the national security establishment. The current debasement of the High Court means only that the judicial branch has finally caught up with the other two.

Our poor Constitution has been in serious jeopardy ever since the National Security Act of 1947 – which essentially allows the executive branch to disregard the law of the land whenever they deem it necessary – blasted a huge loophole into it. Since then, we have increasingly seen presidents ruling by fiat, in an endless array of Executive Orders and National Security Action Memoranda that are only rarely the subject of public debate - if they are even made public at all.

Now, in 1991, we have a Congress that has meekly accepted Bush's revisions of the Intelligence Authorization Act, granting the executive sweeping new powers to conduct covert actions. We have a crime bill pending which will further chip away at the right to a writ of habeus corpus - one of our most fundamental tights. And we have a Supreme Court that has flailed away at protection from warrantless searches, that has allowed private physicians to be muzzled by the federal government, and that has ruled that coerced confessions are now admissible in a court of law.

This is the ominous state of the body politic in America. If our citizenry continues to stand by while a gang of wealthy thugs (with proven contempt for the Constitution) threaten our most basic rights, it may very soon be too late to do anything about it.
Posted by MZepezauer at 10:41 AM