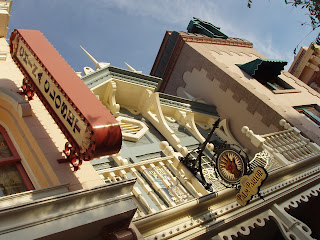 When I took my kids to Disneyland last month, I hadn't been there in 35 years, and I was confronted with a formidable array of entertainment technologies. The Magic Kingdom had changed a lot in the intervening decades, and of course, so had I. While I got off on a number of the newer rides, I was just as stoked about soaking up the architectural details of the place.

Maybe I was an architect in a past life; sometimes I imagine spectacular structures and streetscapes in my dreams. But having read a few architectural critiques of Disney's Xanadu over the years, I was primed to see it with a new eye. 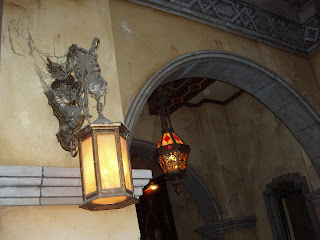 I know I'm not the first to think of Disneyland as an idealized urban landscape,  (perhaps Walt himself was) but it's still striking the extent to which mostly suburban people are paying for the experience of a walkable community. The vast parking lots outside surround a nearly car-free environment. Moreover, people are willing to pay for a relatively high level of public services, though the high municipal taxes reflected in the ticket price remain somewhat obscured. 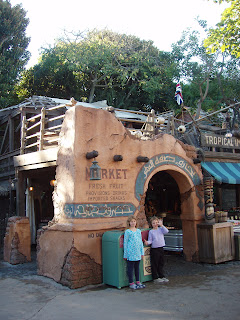 The amount of architectural detail crammed into Main Street was a joy, but one of my favorite areas in that regard was Adventureland, with its blend of global styles from Africa, Oceania, South Asia and the Middle East.

It was startling to see the reworking of some of my favorite Golden State landmarks in the new California Adventure section. The cartoon version of the Golden Gate Bridge was a hoot. I recognized the Santa Cruz town clock, the dome from the Palace of the Legion of Honor, the Yosemite Lodge, and a melange of a dozen different downtowns in the West Coast version of Main Street, USA. Meanwhile, the entire Santa Cruz Boardwalk seemed to have been sanitized and shipped south, right down to the choices of paint colors. 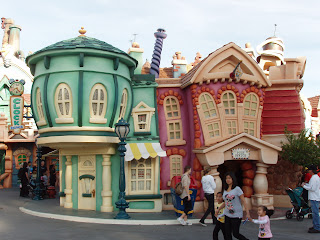 Toontown did not exist in 1975, and the sheer joy the designers took in its creation was evident at every turn.  It was an idealized urban landscape on acid: the pay phones, the diner, the gas station, the talking manhole covers. As far as I'm concerned, the more talking stuff, the better.

One notion I'm left with is that Tomorrowland needs a complete rethinking. The architecture in that section seems drab compared to the rest of it. Despite a few new sculptural touches, it's still a 1950s version of the twenty-first century, with nary a solar panel in sight, and it's really showing its age. The Autopia section still spews out smelly exhaust fumes, and what used to be "Monsanto's World of the Future" now imagines a world in which flat-panel displays are cheap and ubiquitous. 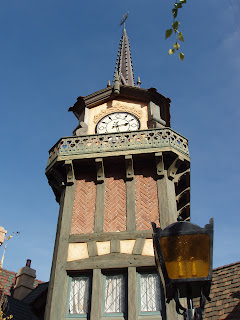 Moreover, in contrast to the cramped familiarity of New Orleans Square or the Teutonic village of Fantasyland, Tomorrowland lacks density – and if there's one thing our future is going to require more of, that would be it. There's plenty of room for, say, a Tomorowland Hotel, with mixed-use urban design, and a showcase for clean energy technologies.

Given Walt's own interest in urban design and new technology, Tomorrowland could be showcase for a new utopian version of our uncertain future. Like the author of the first link above, I'm of two minds over what Walt wrought. I'm not immune to the comforts of nostalgia, nor unmindful of the totalitarian impulse behind visions like Celebration, Florida. But with all the sheer creativity employed by Mouse, inc., you'd think they could imagineer the future with a bit more panache.

UPDATE: A Facebook friend provides a helpful link to a higher level of overthinking....
Posted by MZepezauer at 12:38 PM