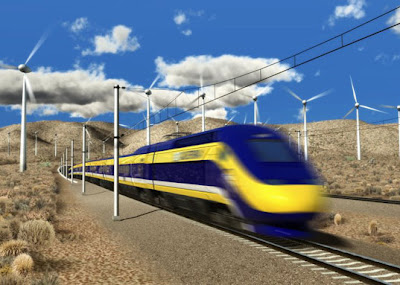 It's heartening to see the White House standing up for modernizing our country's infrastructure. Today Joe Biden announced that the president's budget will call for $53 million in spending on new and existing high-speed rail networks over the next six years. Of course, that same link tells us that the Chinese are spending roughly double that over the same time period - and we have a lot more catching up to do.

Unfortuantely, whether some or all of that money gets allocated depends on the leverage of a handful of Tea Party Republicans in the US House. And even it it is allocated, GOP governors like Kasich and Scott are turning down funds for rail transport in their states - thus freeing up more cash for the states who have already committed to the program, like California.

We seem to be having yet another dispute between people who believe in empirical evidence, and people who enjoy comforting myths. According to this study, states that spent their stimulus money on infrastructure and transportation projects created more jobs than the states that didn't.

I spent a futile hour last month trying to explain the concept of "multipliers" to a high school economics class, after being asked "when has government spending ever done any good?" From the looks of it, I would have had equally dismal success explaining it to GOP lawmakers.

It's unsurprising, given the general level of ignorance about economics and budgetary issues. But that doesn't make it any less tragic. Thus is our nation's future squandered.
Posted by MZepezauer at 12:20 PM