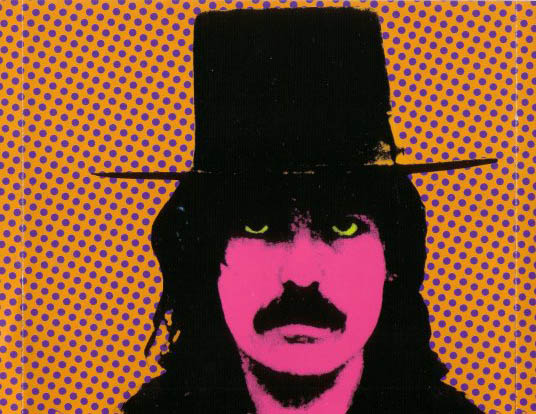 Certainly it was gratifying to see the face of Captain Beefheart on my TV last night, if only for a fleeting second or two. He shared a screen with Malcolm McLaren during the annual Grammy tribute to those who have passed. Don Van Vliet's dust blew back whence it came just a few weeks before I started this blog, and I never wrote a proper obituary for him.

And frankly, others have done it better than I could have. The LA Weekly, Rolling Stone, and Pitchfork all posted eloquent tributes. Tristero, the resident composer at the Hullabaloo blog, shared his memories. And WFMU posted the not-to-be missed "Captain Beefheart's 10 Commandments of Guitar Playing."

Van Vliet's passing was a sad day for me. Alas, I was riding in a car with my sister, when a Captain Beefheart song came on the radio. OOOh, I love Captain Beefheart, I sang out, twisting up the volume. We listen to his faraway voice singing about emerging from a triangle, and then the DJ comes on to say, "That was Captain Beefheart, may he rest in peace." OH!

My wife and kids more or less bemusedly endured my mourning, as I listened disconsolately to what I usually spare them. Describing his appeal, even accounting for my genetic mutation that renders dissonance soothing to my ears, is elusive. But I dug up this correspondence in reply to friend who had a beef with my Hall of Lame rant, and had asked for an explanation of why Captain Beefheart, of all people, belongs in the Rock & Roll Hall of Fame:


Thanks for your kind words, counselor. Now correct me if I'm wrong, but my suspicion is that your characterization of M. Van Vliet's music as "repugnant" is primarily based on a single exposure to "Trout Mask Replica" some twenty years ago. That classic disc (recorded in 1969) is more or less characteristic of his Delta-blues-on-acid approach, but the good Captain made three albums in the late seventies/early eighties that refined his vision considerably, before finally throwing up his hands in dismay at the music industry, retiring to the Mojave desert, and concentrating on oil painting.

Based on your response to the Pixies, my guess is that nothing would ever convince you of the merits of the Beefheart ouevre. Based on your reaction to Jane's Addiction and the Jesus & Mary Chain, though, maybe I could. I know it would be possible for me to put a tape together of his most accessible tracks, just as I did with the Pixies, and perhaps lead you to conclude that "this not worthless, but it's certainly not my cup of tea," or possibly "this is kind of neat, even though I'd never buy a copy if I lived to be a thousand." I'm sure I could do the same with, say, Sonic Youth, or Husker Du or other future inductees. But in so doing, I'd be omitting some of the most vital work, and robbing the artists of their own sense of internal dynamics.

That's not a crime in itself. But as I listened yesterday to the 17 tracks the Pixies themselves selected as their best work, I had to see it as much more of a true sampler of their achievement than just the "nice" tracks I picked out for you. As you point out, rock is so diverse and fragmented by now that nobody can drink all that tea. I wouldn't want to sit still for the Shirelles or the Doobies all day, let alone some of the bathetic mush other fans are championing at the HOF website, like REO Speedwagon, fer gawds sakes. So there's no reason you should even have to be subjected to Iggy or Beefheart. But you asked.

You're certainly right in identifying Beefheart's music as anti-commercial. That's been one of the central urges of the whole garage/punk/alternative evolution. On the other hand, if you want to make a living as a musician, you do need an audience. And the music industry is always more than happy to commodify new sounds. One of the signal achievements of the Sex Pistols was to realize that even repugnance could be commodified, so they (or rather the svengali McLaren) pre-commodified themselves. The irony was not only intentional, it was intrinsic (forgive me, Mr. Rorty).

As you might recall from my essay on the Pixies, I asserted that one of the main contributions of the Velvet Underground was to redefine rock 'n' roll from a music of adolescent angst or teenage rebellion (which it of course still functions as) to one of bohemian subculture (of course, the Grateful Dead were ambling across some of that same bohemian turf at the same time, albeit with wholly different idioms). What Iggy did, probably unselfconsciously, was to roll it all into one; adolescent angst and teenage rebellion and bohemian subculture, channelled by the ugly little skinny guy from Detroit. That makes the Igster the true Godfadder of Punk.

Beefheart's achievement, it seems to me, took three forms. Like the Velvets and the Dead and Zappa and Sonic Youth, he injected some of the sensibilty of 20th century classical composers into the rock stew. Unlike Zappa, he didn't augment his more stylistically complex music with scatology (much). Instead he embraced the Beat poets. I know you find the quality of these folks somewhat variable, and I'm sure you'd be a better judge than I of how successful M. Van Vliet's abstract stream-of-consciousness poetry functions as song lyrics. Like Justice Stewart said, I know what I like. But either way, it's a long way from Buddy Holly (with all due respect, and that's a lot).

The third thing he did, besides adding eggheads and bohos, stretches back further than Buddy Holly. Like all great rockers, Beefheart reinterprets the blues. In the context of his muti-octave voice and complicated rhythms and meters, it became something otherworldly, totally unique and highly influential, in its own way. Like Miles and Ornette, Beefheart nutured his side musicians in his own sensibility, and they later left to seed the music world with their own contributions. And the bands who emulated Beefheart's example range from Talking Heads, Devo, the Red Hot Chili Peppers and the aforementioned Pixes, to one of the true giants of 90's alternative, P. J. Harvey (whose Welsh parents practically raised the poor girl on Beefheart and Dylan).

That's basically the case for Captain Beefheart's enshrinement in Cleveland. It's not just that he defied convention, but that he created something unique and enduring, influenced other great artists, and found ways, late in his career, to make his music more accessible without compromising his vision. Plus, if Bobby Darin is in there....

As for industrial punk, chain saw bands, and garage bands, sure; those that stand the test of time ought to be considered. Most of the garage bands of the 60s (Count Five, the Seeds, 13th Floor Elevators, ? & the Mysterians, etc.) didn't really have long careers. Their aggregate influence was considerable, though. The other big project of the R&RHOF, besides inducting the greats, has been the compilation of The 500 Songs That Shaped Rock. I'd encourage you to visit the website and check it out.

Now, as for a clear descrition of the formal properties that define rock... aw, man, I've got work to do!

PS: Captain Beefheart's official site is right here.
Posted by MZepezauer at 9:50 AM

Email ThisBlogThis!Share to TwitterShare to FacebookShare to Pinterest
Labels: 2001, music