This depressing DailyKos diary by a veteran teacher, entitled "I Don't Want to be a Teacher Anymore," has generated a lot of attention. My experience during three years of teaching was pretty much as she describes – except that I don't have any Golden Age of Teaching to compare it to. It was like that the whole time. Nevertheless, I'm enjoying being a substitute, and I don't want to quit teaching. I'd be happy to take on another classroom fulltime, but it looks like further cutbacks and layoffs are coming. The nationwide war on greedy, lazy teachers is just beginning. 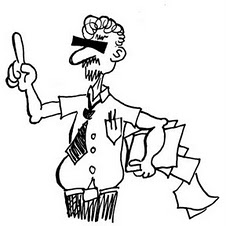 So I'm surfing the Net one night, and I stop off at the weblog of Matthew Yglesias, who I've previously mentioned as a writer annoyingly wise beyond his years. Yglesias linked to a discussion of education policy at another blog called Marginal Revolution. It involved the cliche of idealistic young teachers heroically rescuing inner-city school classes. Luckily that has nothing to do with me because of my lack of youth. But I clicked through anyway.

As I followed the discussion in the comments section, it concerned the controversies around Direct Instruction, in which the teacher follows a carefully designed and evaluated script. It occurred to me that what they were discussing sounded a lot like our new reading curriculum, Success for All (SFA). I follow a script every morning in my reading class, and as a rookie, I'm glad I do. As several of the commenters pointed out, If I weren't following a script, I'd have to write my own, and I have scant time in which to do so.

So I googled on "direct instruction" and "SFA," and found out more. The SFA program, as mentioned above, is carefully designed and evaluated. That is, about a quarter century of research went into its development. Moreover, the program was developed and is administered by a nonprofit foundation. Well, the chair of that foundation had some interesting things to say about NCLB.

One aspect of the law is Reading First, which steers money to impoverished schools to improve their reading scores - though it mandates that the programs used should be scientifically backed by research into what works. So far, so good. But combine the phrase "steers money" with the kleptocratic nature of the Bush dynasty, and I think you can guess the rest. Funds are being steered away from actual research-based methods like SFA and into for-profit textbook programs remarkably unbacked by actual research, but which coincidentally happen to run by those who have fortuitously directed campaign contributions into the proper channels.

There were also allegations of a conflict of interest at the University of Oregon which helps to explain the irritating centrality of DIBELS scores in the current regimen. If there are any Northwestern state legislators who happen to read this blog, this might be a fruitful avenue of inquiry. I'm just saying.

How this works out on the ground in this particular impoverished school remains to be seen. We're into our first couple of months with SFA, and it seems to be working well - though it's fiendishly complicated, paperworkwise. At the same time, I'm spending more and more of my valuable instruction time pulling out students for their weekly DIBELS tests, with an awful lot riding on the outcome.

(I wrote previously about these tests and linked to a veteran educator's post entitled "One Minute of Nonsense." Here, let me just link to it again.)

But there are other ways in which NCLB is affecting the lives of my students, and I'll get to that in some future post. Friday beckons.
Posted by MZepezauer at 9:25 AM

Email ThisBlogThis!Share to TwitterShare to FacebookShare to Pinterest
Labels: education