Commenter TT sent in an interesting question via back channels:

Both of these are generalizations, LOTS of exceptions, but:

Why do jazz fans seem to think that their taste in music makes them cool? Classical is more demanding, rock & roll is less...Hey, I like jazz myself, but I don't think that means anything more than hey, I like jazz.

Why do reggae fans go past the music and adopt the lifestyle? The dreads, the ganja, the weird idolization of Marcus Garvey? Again, I like reggae, I've got nothing against dreads, ganja, or Marcus Garvey, but it just seems curious to me.

I think for a lot of music fans (yours truly included), obsessive fandom functions on some of the same levels as sports and religion do for other people. That is, to give oneself the feeling of being part of something bigger. The communal experience, the mass euphoria, as well as some sense of exclusivity - i.e., that other poor souls just don't get it. 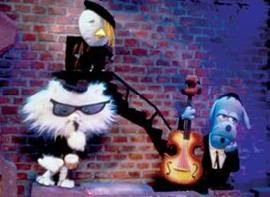 Now, maybe jazz fans have always felt that they were cooler than other music fans, but one thing is that their sense of exclusivity has to have been enhanced as their music's market share has steadily declined. There was a time when jazz music was a genuine mass phenomenon, but today's jazz fan possesses a lot more arcane knowledge than jazzbos of a half-century ago.

As far as demanding goes, I think a lot of jazz players would argue that playing jazz is even more demanding than playing classical, given the need for jazzbos to compose on their toes. On the other side of the equation, while jazz partisans originally saw rock music as primitive and unsophisticated, the intervening years have seen a lot of rock bands that are really jazz players in disguise, with harmonic complexity and improvisatory skills that are every bit as demanding, though wrapped in a very different cachet. Now, I like reggae as much as the next guy, but for me it's always been a bit like punk, or blues - a strictly defined genre (albeit with infinite variations), that I tend to prefer as the spice in a more varied musical gumbo, rather than as a steady diet. I think in some sense, though, that reggae music grew out of Rasta culture as much as the vice versa, which could account for some of the "going native" aspects - as with Gary Oldman's character in True Romance.

I don't know a lot of hardcore reggae fans, but I'll open the floor to comments from jazzbos as to why they are cooler than the rest of us.
Posted by MZepezauer at 11:16 AM