This is the third of three re-posted articles commemorating the twentieth anniversary of the Gulf War. This one was published in the war's immediate aftermath. Of course, the events of that month continue to reverberate on the streets of Baghdad today.

"War is as much a punishment to the punisher as it is to the sufferer."
–Thomas Jefferson

The words hubris and karma spring readily to mind these days. This country reminds me of nothing as much as the white South Africans, expending vast amounts of blood and treasure to stave off the inevitable, for as many years as possible. How long before we are force-fed a taste of our own medicine? How long before our years of wretched excess implode on us? 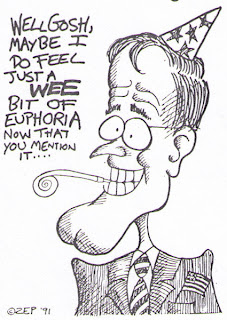 It was Cold War architect Paul Nitze who spelled out the rationale for the last New World Order, as it was taking shape in 1948. "We have about 50% of the world's wealth, but only 6.3% of its population... our real task in the coming period is to devise a pattern of relationships which will permit us to maintain this position of disparity without positive detriment to our national security."

The rest, of course, is History, which is simply not a topic of general discourse in this country, especially this particular history. The "pattern of relationships" we devised to "maintain our disparity" involved selling up as many bloody tyrannies and oligarchies as possible in the far flung corners of our empire. The local autocrats got a cut of the take as our multinationals fleeced the populations (and the US taxpayer) and shot down anyone who objected. This, as Daniel Sheehan has so eloquently pointed out, is "the moral equivalent of the Mafia."

Our flag-waving compatriots ignore this history at their peril and many do, indeed, remain willfully ignorant of it. Larry Bensky, in this week's East Bay Express, examines a study that quantifies the extent to which supporters of this war believe, for instance, that it was US policy to oppose Saddam Hussein before August 2, 1990, while, of course, precisely the opposite was the case. The 86, or 99, or however many percent of our fellow citizens who think this was a jolly good little war, may have some vague notion of the nastiness necessary to maintain our national lifestyle. They simply prefer not to look at it. And that is hubris on a massive scale.

So we have once again spent blood and treasure in pursuit of our “national interest,” as defined by our elites. The amount of blood spilled is currently being tallied up US blood only, of course. If the experience of Panama is at all representative, the actual number of US corpses is considerably higher than the announced statistic. There seems to be very little, however, that the public will not take the government’s word for.

The cost in treasure will be a matter of some dispute, depending on how many of our allies will stiff us for the pledges made to sustain us in our new role as the world's rent a cop. The actual figure will also depend on whether our babes to members of the UN Security Council will be factored in, or a lifetime of veterans benefits however measly for our brave lads and lasses or on the eventual costs of a permanent military presence in the region. The tab may indeed turn out to be staggering depending on one's point of view. It is still only a few large drops in the bucket of our $4 trillion debt.

As for the cost in Iraqi blood, it is simply not our problem, beyond a certain amount of political fallout in the international arena; nothing to get squeamish about. Unless, of course, the question of karma is a factor. It is said that you cannot kill a human being without carrying their karma with you for the rest of your life. We now have another hefty tally of civilian deaths to add to the karmic balance sheet of the US taxpayers. Reliable estimates from Europe, based on reports from the Red Crescent, put civilian deaths in the low six figure range. Some 60 to 70 percent of this total are said to be children. If we follow the Nicaraguan model and squeeze the populace until the leadership is disgorged, we can expect the tally to rise considerably before Saddam, our latest Frankenstein, meets his final reward. Unless reconstruction aid is granted, and soon, the cholera epidemic that has already begun will devastate far more of Iraq’s children.

Bush, of course, has stated that he won't see one dime of US taxpayer funds going to Iraq. With deadpan black humor, he says the best he can offer is some "free advice." No matter. As our new national hero, General Schwarzkopf has pointed out (referring to war atrocities), the Iraqis are "not from the same human race" as us. Presumably, he means that we come from the human race that usually has hired hands taking care of our atrocities for us.

So what kind of Order can we expect to see imposed at gunpoint on the Middle East? Judging from the Last World Order, I would hesitate to predict an abundance of peace or stability, as there is no evidence our government places any particular value on these concepts Nor is our professed concern for justice for the Kurds or Palestinians likely to be a matter of anything more than vigorous lip service (I haven't even heard much of that for the Lebanese). Again, judging from the historical record, an abundance of democracy is something that should not be expected under any circumstances, as this is something our elites have shown a marked aversion to, particularly for nonwhites. About all I am willing to predict on the record would be the fall of several other troublesome Arab regimes over the next few years, as further scores are settled. Yemen might be an interesting place to watch.

One of Ronald Reagan's favorite stories concerned a little boy who, upon receiving a roomful of manure for Christmas one year, immediately began digging through it with enthusiasm, convinced that there had to be a pony under there somewhere. I'm afraid, however, that what is underneath all the horseshit handed to us recently is not a very pretty pony. If Western science or Eastern religion teach us anything, it is that for every action, there is an equal and opposite reaction. Sooner or later, that reaction will come knocking on our door.

"Under the influence of politicians, masses of people tend to ascribe the responsibility for wars to those who wield power at any given time period. In World War I, it was the munitions industrialists; in World War II it was the psychopathic generals who were said to be guilty. This is passing the buck. The responsibility for wars falls solely upon the shoulders of these same masses of people, for they have all the necessary means to avert war in their own hands. In part by their passivity, and in part actively, these same masses of people make possible the catastrophes under which they themselves suffer more than anyone else. To stress this guilt on the part of masses of people, to hold them solely responsible, means to take them seriously. On the other hand, to commiserate masses of people as victims means to treat them as small helpless children. The former is the attitude held by the genuine freedom fighters; the latter, that attitude held by the power–thirsty politicians."