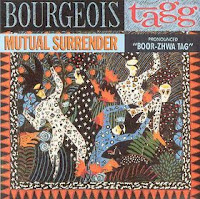 Bourgeois Tagg is long gone – they broke up in 1989 – But the opening line of the review gives me the notion to do a "Favorite Bass Players" list, which I'll get to later today.

In my book, a band is only as hot as their bass player - which is why I was doubly impressed at last Saturday's Bourgeois Tagg show. Co-leader Larry Tagg treats his axe like a lead instrument, sputtering out coarse, melodic lines straight through each tune, mixed as prominent as possible. Tagg took several dynamic solos that made guitarist Lyle Workman's polished workouts seem rather unexeptional by comparison.

Opening for Bourgeois Tagg was Some People, formerly known as Joe Allen & the Shapes. Their credibly sharp set was enhanced by the talents of bassist Al Burns. Blessed with the hands of a wide receiver - the guy must be at least six foot six - he was all over his huge Arion bass. Burns complained of sore fingers backstage, and well he might. He spent the whole sixty-plus minutes plucking, popping, and strumming the thing like a goddamn banjo!

Burns was the best part of this somewhat disparate quartet - your standard power trio plus vocalist. Bandleader Joe Allen is a thin, affable Brit with a voice resembling Lou Reed's. Guitarist Ronnie Appelman has a penchant for metal solos (and dresses the part) but plays rhythm in a more modern, angular style. Drummer Chris Lloyd ties the styles together with reasonable cohesion, but the tension between them keeps this band from becoming predictable.

Bourgeois Tagg swept into a sold-out Catalyst not just on the strength of a rising Top-40 single, "I Don't Mind at All," but on two solid albums of snappy, thoughtful pop tunes, and four years of touring to build an audience. The latest LP, YoYo , was produced by legendary knob-turner Todd Rundgren. Rundgren was an obvious choice, since their debut record, with its catchy melodies and high-pitched harmonies, bore more than a passing resemblance to his band, Utopia.

"Todd has a kind of sarcastic sense of humor that took some getting used to," reports Workman, "but it was a great experience, and we really learned a lot." Indeed, the collaboration seems to have paid off handsomely. While he tightened things up lyrically with songwriters Tagg and Brent Bourgeois, Rundgren took a hands-off approach instrumentally. Obviously these guys need no help in that department.

They have a twin-keyboard setup, with Bourgeois banging out chords while singing in a strong, clear voice, and Scott Moon adding color and texture in the background. With Tagg and Workman punching through the mix, they tore through the bulk of their two albums, each song honed to a sheen by the months on the road.

Whatever else they might have done, though, any band that covers the Beatles' "Tomorrow Never Knows" has automatically won me over. This was no simple reading, either - they yanked John Lennon's haunting, droning melody into the 80's and turned it into a throbbing, danceable affirmation. Drummer Mike Urbano, in particular, handled the demanding rhythms with precision, while Bourgeois tossed in a brief instrumental quote from George Harrison's "Within You, Without You" for good measure. Any band that can take this masterpiece and make it their own demands not to be overlooked.
Posted by MZepezauer at 8:06 AM