2001: Hiroshima Didn't Have to Happen

This appeared as an op-ed in the August 18, 2001 issue of the Arizona Daily Star, earning me an irate 6am phone call from a WWII vet, and lots of interesting mail, some of it civil. 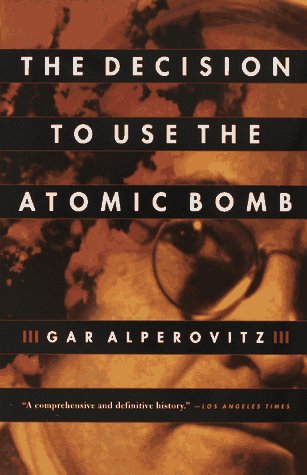 "A long habit of not thinking a thing wrong gives it a superficial appearance of being right, and raises at first a formidable outcry in defense of custom." - Thomas Paine, "Common Sense," 1776

Fifty-six years ago this month, we became the first and only nation to use nuclear weapons in warfare. The world was told that the atomic bombings of Hiroshima and Nagasaki were justified in order to bring a swift end to the war without a costly and bloody invasion of Japan's home islands. This, to put it charitably, was a lie. No less an authority than General Dwight Eisenhower has stated unequivocally: "It wasn't necessary to hit them with that awful thing."

Yet millions of Americans still believe what they were told in August of 1945, well before the experience of being regularly deceived by our government became commonplace. As we saw with the controversies surrounding the 50th anniversary exhibition at the Smithsonian, many are outraged by anyone who agrees with Eisenhower's views. But Eisenhower was hardly alone at the time.

President Truman's top military advisors were virtually unanimous in their belief that the atomic bombs were not needed to end the war without an invasion: Generals MacArthur, Clarke, Bonesteel and Marshall of the Army; Admirals Leahy, Nimitz, Halsey, Wagner and Radford of the Navy; and Generals Arnold, Eaker, LeMay, Spaatz and Chennault of the Air Force. (Comments from each of these men can be found at www.doug-long.com, in an extended discussion of Gar Alperovitz' book The Decision to Use the Atomic Bomb, the most extensive examination of the new evidence in this case.)

The military leaders knew, as most civilians and soldiers did not, that Japan's military situation was completely hopeless. We controlled both her seas and her skies with impunity. The war would be over long before an invasion could be mounted. Eisenhower also knew what some of his fellow generals did not: that for over a year we had been intercepting Japanese diplomatic cables seeking surrender. Dozens of such messages have now been declassified. This cable traffic became more frequent and more desperate in the final weeks of the war. By then it was clear that the Japanese Emperor and even elements of her military were committed to surrender. And there is now no doubt that President Truman knew this when he made the decision to use nuclear weapons. We have a diary entry in his own handwriting concerning the "cable from Jap Emperor asking for peace."

There was only one condition. Japan was asking for the same terms on which the war was later settled: that she be allowed to retain her Emperor. Truman's political advisors told him that even a hint that we would agree to this, even a private assurance, would be likely to bring the war to an end. But Truman not only refused to offer such assurances, he explicitly removed them from the statement issued at the Potsdam summit in July, knowing full well that this would prolong the war. He waited long months until the atomic bomb was available, without pursuing other avenues to peace. Far from saving lives, the nuclear option caused more soldiers to die in a war that was essentially over.

Why did Harry Truman do this? The available evidence in the historical record indicates that Truman and his closest advisor, Secretary of State James Byrnes, felt that nuclear weapons would give America unchallenged military power. They were looking ahead to the Cold War; they believed that demonstrating our willingness to use such weapons would make the Russians "more manageable" in the postwar period. Other advisors warned that this would lead to a costly nuclear arms race. But Truman and Byrnes chose to believe General Groves, leader of the Manhattan Project, who predicted that it would be twenty years before another nation could develop nuclear arms.

This, of course, was one of history's greatest miscalculations. They could not definitively foresee what we know now: that their decision is still killing the children of Hiroshima and Nagasaki in their fifties and sixties; that we would spend trillions of dollars in a needless arms race; that thousands of patriotic soldiers and atomic workers would be sickened and killed by the careless use of nuclear power; that island nations of the South Pacific would be destroyed in our quest for nuclear supremacy; or that we would lose a good measure of our democracy in assuming a permanent war footing and adopting extraconstitutional measures in the name of national security.

It is their responsibility nonetheless, and it is our legacy. Because of geostrategic political calculations, our government chose to use nuclear weapons without warning, against a civilian target, and without first pursuing any other method of achieving Japan's surrender. Rather than justifying it by invoking revenge for Pearl Harbor or other Japanese atrocities; rather than expressing a triumphalist joy for the lives saved in an invasion that never would have occurred; we should unflinchingly recall this anniversary with humility and sorrow.

For a much, much longer version of this piece click here.
For a responsible opposing viewpoint, click here.
Posted by MZepezauer at 4:53 PM