This book review appeared in the San Jose Metro: 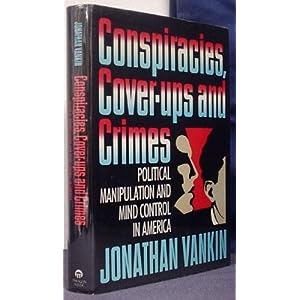 I wish every American could read this book, because if even a fraction of it is true, we are in serious trouble. Listen: this is the shit they don’t want you to know. And if you want to know who “they” are, this is the place to look.

Conspiracy theory, writes Jonathan Vankin, is “the last real political heresy.” Drawn to such unauthorized thinking, he spent two years immersed in the topic, and emerged, sanity intact, with the definitive, certainly the most serious, and possibly the only comprehensive look at American conspiracy theory. I cannot reccomend this vital work highly enough (conflict-of-interest check: while Vankin is the News Editor of this publication, I have never met the man. No conspiracy here).

Conspiracies, Cover-ups and Crimes is a triumph, not only of research and interviewing skill, but of condensation. How Vankin managed to fit virtually every notable scandal of the postwar era into such a slender volume is beyond me. While additional detail might have left some treatments slightly less arcane for the lay reader, the book’s briskness is one of its major assets. Scarcely does one grasp the horrible implications of one theory, before Vankin has gallumphed off in another direction, trumpeting yet another heretical interpretation of recent history. This is a quick and easy read, but it synopsizes some of the most crucial and poorly-understood information of our time.

The first half of the book consists of profiles of some of the most fascinating practitioners of the form, including Lyndon LaRouche, The Christic Institute’s Daniel Sheehan, proto-Bircher Robert Welch, the late Mae Brussell, Judge Jim Garrison, and local talk-jock Dave Emory. In the second half, Vankin stands back and lets the theories speak for themselves. Among the topics he tackles are the Nazi diaspora, the CIA’s involvement with drug traffickers, government experiments with mind control, what really happened to Pan Am 103 and KAL 007, and of course, the Mount Everest of conspiracies, the JFK assassination. Throughout, he is a wry and knowledgable tour guide. He gives both right- and left-wing conspiracy theories the benefit of the doubt they rarely receive, but not without a certain benign skepticism. His attitude is, “this is what they say; judge for yourself.”

While Vankin performs a valuable service in rendering unthinkable thoughts comprehensible, his most important insight is that conspiracy theory is as American as, say, semiautomatic handguns. The term itself is burdened with connotations of loopy obsession, which works quite efficiently to marginalize dissent in this country. But conspiracy theory is not just the province of fringe cultists; it is at the heart of the mainstream political culture. Ronald Reagan is probably the most sucessful conspiracy theorist of all time, basing a whole career on rantings about Cadillac-riding welfare queens or Sandinistas marching on Harlingen, Texas. More recent examples include Bob Gates’s inflations of the Soviet Threat, or the Thomas hearings, in which the judge and his supporters intimated that Professor Hill’s charges had to be the result of a plot by, presumably, card-carrying ACLU members.

The point is that while those in power can get away with the most outrageous fantasies virtually unchallanged, questioning the official story will get you labeled as a “theorist,” a “buff” or a “nut.” Never mind that some of these conspiracy theories are as well supported by evidence as the Theory of Relativity. Documentation of CIA collaboration with Nazi war criminals, for instance, is both extensive and credible. Yet this has rarely been the topic of public debate, even when an ex-CIA director was found to have some of these same Nazis on the payroll of his 1988 Presidental campaign.

You would have to look long and hard to find someone believing Lee Harvey Oswald acted alone who is not paid to do so; polls show some 80% of the American public believe in a conspiracy in the JFK case. Yet eyes will roll heavenward should anyone try to discuss the nature or implications of that conspiracy in polite society.

Most serious conspiracy theorists shun the term that trivializes them, preferrring to call themselves “researchers.” Perhaps it would be wiser to embrace the label, because if there is one thing this country needs, it’s more conspiracy theories. Certainly there is no shortage of conspiracies about which to theorize. Even the most outlandish of theories are valuable as worst-case scenarios. With hindsight, we can see that Iran-contra, Watergate and the JFK case turned out to be much worse than anyone could imagine at the time. Clearly, we need to do a much better job of imagining how bad it can get.

There ought to be no theory so outlandish that it can’t be considered on the merits of its evidence before being dismissed; otherwise we are a nation of ostriches. If, as hypothesized in Conspiracies, Cover-ups and Crimes, the AIDS virus was genetically engineered by the US government; if the CIA blew up 270 people over Lockerbie, Scotland; if our elections are fixed by computerized vote fraud; or if a military coup murdered our 35th President, then justice demands we not shrink from the facts. Branding such allegations ridiculous without considering the facts which buttress them is worse than myopia; it verges on criminal negligence.

Well, they had better be coincidences, or, as I mentioned before, we’re in deep, deep trouble. And since it’s pretty obvious to most everybody that we’re already in deep, deep trouble, maybe you should buy a copy of Jonathan Vankin’s book and come up with a theory as to why that is.
Posted by MZepezauer at 5:09 PM