It's been just over a year since the passing of the invaluable activist and historian Howard Zinn, author of A People's History of the United States

. Here's a review of one of his lesser-known books. 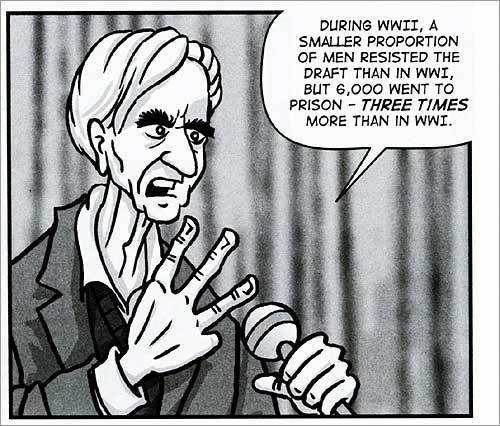 Radical historian Howard Zinn has produced a welcome and timely polemic dissecting the foundations of what he terms the “dominant American ideology.” Zinn argues, with considerable passion, that questioning our conventional wisdom on topics such as economics, democracy, justice or communism is a matter of life and death. He asserts that the time has come to declare our independence from outmoded cliches and the so-called experts who disseminate them. His words take on a chilling relevance when read in the context of the daily carnage in the Persian Gulf.

Perhaps the most resonant of these eleven essays are those on “Just and Unjust War” and “Free Speech: Second Thoughts on the First Amendment.” Zinn, a World War II bombadier, now considers war too evil to ever be just, an aversion he concedes is outside the orthodoxy of modern thinking. He discusses at length the war he willingly joined to oppose fascism, lamenting that “the glow of rightness that accompanied that war has been transferred, by false analogy and emotional carryover, to other wars... perhaps the worst consequence of World War II is that it kept alive the idea that war could be just.” To the contrary, the rationales offered for our involvement prove, in hindsight, to be as hollow as any other rallying cries.

Did we fight to save the Jews? Apparently not, as US officials displayed a studied indifference to their fate, and indeed passed up numerous opportunities to bomb railroad lines to the death camps as having “no military value.” Arguments that the US fought to oppose racism, or to uphold the rights of self-determination and democracy, were seriously undermined by our postwar foreign policy. And our attacks on Dresden, Hiroshima, and Nagasaki support Zinn’s point that “once war is made... a momentum begins in which the worst horrors become inevitable” — a point as crucial today as in 1945.

Waging war to oppose fascism was clearly supported by the US citizens, but “it was not the citizenry but the governments who decided how the war was fought, and who had the power to shape the world afterward” — that is, to set the terms for the ‘new world order.’ Zinn also points out how US interests supported Hitler before the war, just as they did the New Hitler of Baghdad. Finally, he notes that fascism was not eradicated, that “the elements of fascism — militarism, racism, imperialism, dictatorship, ferocious nationalism, and war — were still at large in the postwar world,” often with US support.

Just as appropriate to the current crisis is Zinn’s discussion of freedom of speech, which has clearly deteriorated, even in the few short months since publication. Zinn presents an overview of official hostility to that particular right, beginning with the Sedition act of 1798, and the Espionage Act of 1917 (still on the books, and since expanded to cover peacetime), and moves through a variety of Supreme Court limitations on free speech, and the chilling effect of surveillance of citizens by the FBI and CIA.

Even if these restrictions were somehow removed, posits Zinn, two large problems would remain. The first is that access to the media is controlled by financial status. The second is that the government lies on a more or less routine basis, and the press tends to accept these assertions to a shameful degree. In neither case is the First Amendment of much assistance. With some 57% of the populace calling for more censorship, according to a recent poll, this fundamental liberty is more imperiled than ever.

Zinn also examines the 500-year-old influence of Machiavelli, an inspiration for statesmen from Borgia to Hitler to Kissinger. The famous truism about ends justifying means has become a cornerstone of US foreign policy. Zinn counters this doctrine with eloquence, noting that “massive violence... cannot be justified by any end, however noble, because no outcome is sure. ...if the ends, however desirable, are uncertain, and the means are horrible and certain, those means must not be employed.”

He also takes exception to the belief that human beings are innately aggressive, offering considerable evidence to buttress his assertion that most acts of violence are explainable by social circumstances. “It is true,” writes Zinn, “that there is an infinite human capacity for violence. There is also an infinite potential for kindness.”

Professor Zinn’s optimism is an outgrowth of his experiences at the forefront of the Civil Rights and antiwar movements, which achieved significant, though limited, victories a generation ago. He argues with vehemence that the startling and unpredictable events of the past few years, particularly in Eastern Europe, contradict assumptions that nonviolent resistance to overwhelming state power is hopeless. “That apparent power has, again and again, proved vulnerable to human qualities less measurable than bombs and dollars: moral fervor, determination, unity, organization, sacrifice, wit, ingenuity, courage, and patience...no cold calculation of the balance of power should deter people who are persuaded that their cause is just.” His optimism is admirable, and a welcome antidote to the despair born of CNN overdose. That it is offered with such logic and clarity may inspire more than one reader to oppose this latest outbreak of official madness.
Posted by MZepezauer at 8:51 PM