Three weeks after the Loma Prieta Earthquake of October 17, 1989, this piece appeared in a supplement to the Santa Cruz Comic News, called The Epicenter: 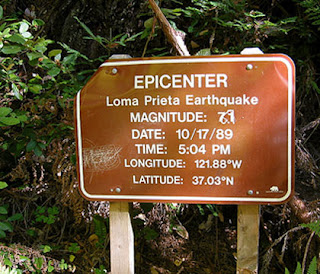 In the aftermath of the Loma Prieta earthquake, it is becoming increasingly clear that not all of the aftershocks can be measured by the Richter scale. Perhaps inevitably, many downtown merchants have become frustrated by the pace of the re-entry program allowing them access to their damaged - or not-so-damaged - buildings.

As with so many other issues, where you stand on this depends largely on where you sit. Owners or tenants of red-tagged structures have an interest in delaying demolition as long as possible, in order to retrieve inventories. Green- or yellow-tagged businesses, on the other hand, want the mall reopened as swiftly as possible, so that they can reopen their stores or relocate in more stable locations.

Meanwhile, city officials, caught in the middle, exacerbated this innate conflict by their early insistence on completing demolitions before allowing any re-entry. Adding to the confusion was the FEMA regulation which stipulated that only those demolitions completed "in a timely fashion" would be reimbursed by the government. Initially, it was thought that that meant ten days, while later clarifications (as long as things are "proceeding unhindered, on course, towards a decision to demolish") bought more breathing room.

Much of the criticism of the city's handling of the crisis centers on the first week or so, following the completion of search-and-rescue operations and the inspection of buildings. As the frequency of aftershocks started to subside, many business owners became increasingly frustrated with the emphasis on red-tagged structures. Ron Prilliman, owner of the undamaged Cymbaline Records, told a meeting of the Downtown Association that he opposed any staged demolitions, which would allow for retrieval of inventories. Meanwhile red-tagged businesses, like Logos Books and Bookshop Santa Cruz, negotiated with the city to be able to do just that. Gloria Welch, owner of the condemned Hihn Building, filed suit to restrain the city from proceeding with demolition.

The impasse was eventually resolved, due in large part to the heroic efforts of Margaret Wilson, co-owner of Lily Wong's. Working through the Downtown association, and with the cooperation of City Planner Charlie Eadie, she helped to negotiate a compromise. Business re-entry would take place in the mornings, from 9am to noon, while demolitions would proceed in the afternoons. Wilson also helped merchants get around restrictions on the number of people and amount of time allowed in each business by mobilizing an army of volunteers to pass inventory out of damaged stores, bucket brigade style.

Nevertheless, many merchants remain bitter about what they regard as unnecessary delays - though few were willing to say so on the record, citing a need for amicable relations with city officials in the future. "I'm not frustrated anymore," offered one green-tagged merchant with a nervous laugh, after finally winning re-entry. "You know, sometimes it's like, you have a frustration up to a point, and then you solve the frustration, and then you're not frustrated anymore..."

"I'm not going to put my ass on the line," is how another business owner put it, though after being promised anonymity, the merchant had plenty of steam to let off. "I think that the ever-looming fear of liability is in the city's mind. I think that the fire department operates from the standpoint of public safety, and they would have preferred to have bulldozed the whole damn [mall] without letting anybody back in... what was even worse... is having two weeks into the process and still not know what the hell is going on or whether you can get in."

Perhaps the most controversial of the city's decisions was the limit of 15 minutes inside some red-tagged buildings for retrieval of vital records. While the city may well have preferred no access at all to some of the structures, the number, which nobody seems able to trace the genesis of, was almost universally regarded as arbitrary and inflexible. Neal Coonerty of Bookshop Santa Cruz ended up racing through his darkened building with flashlights strapped to each arm, grabbing wallets and purses for his employees while stumbing over piles of books and debris.

"In my mind," says Coonerty, "if a major aftershock hit, it might hit in minute one as well as minute16, so it's a crapshoot anyway." Another merchant grumbled, "They were concerned that we'd have another good afterjolt and somebody would be in there... To me, that's as much chance as somebody tripping or falling, or driving over Highway 17..." City officials, who point with pride to the fact that nobody was killed or injured during re-entry, maintain that the 15-minute limit was necessary to prevent merchants from hauling out non-essential items.

While Coonerty feels that he could have worked more safely given a half hour, many green- and yellow-tagged business owners would have been grateful for a tenth of that. They simmered in frustration during the early period, and would have been just as willing to risk their lives for their livelihoods - though many were locked out of perfectly safe buildings. "Sure, I got my hour inside ," fumed one merchant, " after 17 days. It would have made a world of difference if I could have had three or four minutes a week or two earlier."

Stephan Sternat, owner of Stephan's Jewelry, found the mounting delays increasingly difficult to bear. Along with other Walnut Avenue merchants, he mouted a protest, unfurling a banner on the chain-link fence, griping to the TV cameras, and eventually staging what he called a "walk-in" at City Manager Richard Wilson's office. "If we hadn't done our little thing," said Sternat, "we would maybe be coming in Friday for an hour and then had a limited access, and who knows how long it would be after that before we could literally come back in and start to do some business." According to City Planner Eadie, the city's point man on the re-entry program, the Walnut Avenue fence was going to be moved the next day in any case, and the entire affair was "kind of a big brouhaha over nothing."

In light of the difficulties of many green-tagged business owners, more than a few eyebrows were raised when attorney Bob Rittenhouse was given six hours to retrieve records from his building, which, he told the Sentinel, was "between a yellow and a red tag." Pressed by the Comic News, Bob Rittenhouse, Jr. repeated the characterization: "It's kind of in between; the building next door is red-tagged, and they share a common wall ." Asked once again what color tag it was, Rittenhouse replied, "I guess, from what I understand, I never saw a tag on it, but I guess it's got a yellow tag, is what it's got." Rittenhouse went on to note his inability to retrieve his antique fire truck collection from the building.

Such glaring disparities in the process may stem not from favoritism but from the variety of resourses available to different business owners. Rittenhouse, like some others, was able to hire his own structural engineers to assess damage to the structure and sign off on liability, relieving the city of that burden. A smaller business owner, unable to afford such services, is stuck with the original assessment by the city's harried and overworked inspectors, who may or may not have even entered the building.

Even with such resources available, the outcome is sometimes preordained. Hihn Building owner Gloria Welch's restraining order, while it laudably bought some retrieval time for some of her tenants, nevertheless only ended up delaying the inevitable. Her own structural engineers, once granted acccess to the structure, confirmed the original assessment: the building had to come down. Still, for small businesses, even that option is not available, and many are infuriated by what they regard as less than comprehensive inspections.

In the current atmosphere, emotions are runing high and tempers are running short. Given, as one merchant puts it, that everyone is "as stressed as they possibly can be," it is not surprising that rumor-mongering is at an all-time high. One persistent, but unverifiable whisper has it that bribes have been paid to various of the public and private security guards surrounding the mall, and that wee-hours entries to no-access buildings have taken place. City officials unanimously assert that no such reports have reached them. Even if the principals in these alleged incidents could be identified, denials from all concerned would no doubt be inevitable.

There has also been some confusion over the lines of authority in the weeks following the quake. Some merchants complained that the city council was micro-managing events and failing to delegate enough authority, while others felt that too much power had been handed over to the Downtown Association, with not enough public accountability. In fact, City Manager Wilson has taken a greater amount of responsibility than usual under emergency powers granted him by the City Council. Under the circumstances, Wilson has been answerable for whatever frustrations have arisen from the re-entry process, and he is the first to admit many people have been left unsatisfied.

"I'm sure that you can't be totally fair in dealing with this, and I'm sure there is unfairness in the way it's worked out... we've really made an effort, to the best of our ability, to accomodate people's needs; it's been chaotic, it's been uneven, it's been difficult. " Wilson, like most public officials, has been working 70-80 hour weeks since October 17, and appears to have coped with the crisis to the best of his ability. Some, however, are less than sanguine with how much that is.

"They hired somebody who would be a yes-man, and who would take directions," offered one disgruntled merchant, "and ... that's what they got, was somebody exactly what they wanted. And, in a time of crisis ..... he's doing a great job, for what he can do..." One insider grumbles that Wilson was too inaccessible in the early stages of the crisis. "No one could get an answer, because they couldn't talk to a person who could make a decision. The only person making decisions was Dick Wilson, and he was in meetings all the time...For one thing, the day after an earthquake, I could design a procedure for dealing with merchants and public safety, and that doesn't take a genius, and we were talking about the procedure that basically is being followed now, two weeks ago..."

Wilson, offered the benefit of hindsight, declines to say what he might do differently. "I think we did it in the right order; I don't know how else we could have done it.... I don't think we had grievous oversights, I think that it's just difficult to get every thing right under these circumstances." Given the conflicting demands of some 400 merchants, he certainly has a point. But since very few of us have ever experienced anything like the current situation, we can only hope that we can glean sufficient lessons from it to be better prepared the next time it occurs.
Posted by MZepezauer at 7:09 PM