Even as a survivor of the Loma Prieta Earthquake, I find it nearly impossible to fathom the apocalyptic devastation unfolding in Japan. The quake of October 17, 1989 was 7.1 on the Richter scale, which makes Friday's disaster nearly one hundred times worse. There are tens of thousands dead in Japan; in the Bay Area there were 63. And though the epicenter was in Santa Cruz County, only seven souls were lost.

As I look back on the articles I wrote at the time, it seems almost quaint how big a deal it was in so many of our lives. And yet disasters have some aspects in common, whatever the scale. They can leave deep emotional scars on both community and individual and, conversely, can serve to bring people together. I have no doubt that the brave and resilient people of Japan will rebuild their shattered communities to be better than ever. And if you want to help, here and here and here and here are some options.

When the quake hit, I was working in the offices of the Santa Cruz Sun, where we were just about ready to put that paper to bed. That edition was never published. Ten days later, The Sun published its final edition. About a third of our advertisers had gone out of business, and so, consequently, did we. I was asked to survey the quake's impact on the local arts scene: 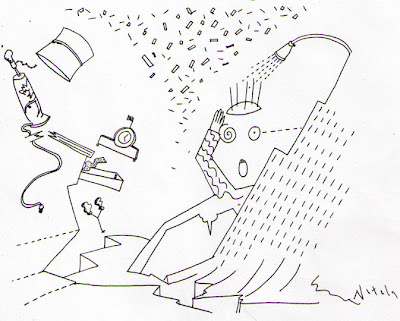 Santa Cruz is dead; long live Santa Cruz. As all life feeds on death, the death of our downtown gives us the chance to build a new one, like Troy, on the ruins of the old. The gaping holes in our commercial district represent blank canvases, or unwritten musical scores. If we Santa Cruzans could agree on anything, we would find the wealth of possibilities presented here almost intoxicating. As it is, we'll have to balance the various competing interests and settle for as much of a loaf as we can summon up.

I wish we had the nerve, or the wherewithal to grab the great mad architect Hundertwasser and set him loose here, designing the Garden Mall to end all garden malls. Maybe we could summon Claes Oldenberg to create an appropriate local landmark; perhaps a giant banana slug climbing some otherwise undistinguished edifice. How about a few Bucky Fuller domes tossed in here and there, like tomatoes in a salad?

Whatever form it takes, downtown will rise again; the galleries, the book and record stores, the endless antique brokers, the jolly caffeine dispensers, even the haranguing street preachers will be back. Whether the struggle for survival can balance with the ability to dream remains to he seen. Obviously the first order of business is to restore people's livelihoods.

Perhaps the cruelest blow, culturally, may be the loss of all three downtown bookstores. Plaza Books may be a total loss. Logos owner John Livingston was given a yellow tag for the rear of his store, which is mostly records, while the irreplaceable used-book jewels at the front were red-tagged. Livingston's private engineers tell him, however, that the building can he safely demolished in stages, from the top down, which would allow recovery of his inventory. At presstime, Livingston is fighting for the right to do so, but businesses able to reopen are pressing the city to begin demolition of red- tagged structures as soon as possible. Livingston, like Bookshop Santa Cruz owner Neal Coonerty, vows to reopen in tents. Coonerty, who was thankfully insured, is planning a 'friends of the Bookshop" party on November 11, at a yet-to-be-decided location, to discuss the resurrection of his store.

Among the clichés I am overly fond of wielding, one in particular has come true. “You can't throw a rock in this town without hitting an artist (or musician)," I would intone. How many artists or musicians have been hit by thrown rocks remains to he seen, but as they sift through the rubble, both physical and psychic, some problems unique to their professions arise.

Many arts professionals are used to living on the edge, and might he reasonably expected to weather a few months of diminished incomes. But for others, the loss of studios, rehearsal spaces, tools of the trade, or day jobs may prove insurmountable. On top of whatever immediate losses they might have experienced, the fact remains that spending plans are being revised, and support for the arts will inevitably end up lower on the list. Lance Linares, head of the Cultural Council; says, “Everyone recognizes that funding priorities are going to be directed elsewhere, and rightfully so.”

Among the arts organizations affected initially are the Art Museum of Santa Cruz County, the Tandy Beal Dance Company, the Santa Cruz County Symphony, the Cabrillo Music Festival and the Cultural Council itself. Booted from their offices, many of groups have set up temporary headquarters in homes or vacant office space, but often without crucial records. The Octagon Museum, while relatively undamaged by the quake, faces the loss of much of their archives, which are housed in the Historical Trust Building across the street.

The canceled second week the Open Studios tour has been scheduled for December 2 and 3, with plans being made to arrange exhibition spaces for those without studios left to open. Many of the others are speaking of donating a percentage of the proceeds to artists without work left to sell, The Artisan's Cooperative space, for instance, remains fairly unscathed, but countless precious works have been reduced to shards.

Musicians, though less dependant on grant money, face the diminished tourist dollar as well as belt-tightening by impoverished music fans, who may, however reluctantly, need to eschew regular nights on the town for the time being. Jon Saggau, keyboard player for Farrah Faceplant, came up with the idea for a series of benefit concerts for the Red Cross, despite water damage to his own home, which was the hand's principal rehearsal space. He and bandleader Carl Christ approached Michael Alford, booking agent for O.T.'s, who quickly coaxed free advertising for the events out of several area radio stations. The resultant series of shows, headlined by Faceplant on Saturday, Boys Choir on Sunday and Andy Santana and the Soul Drivers on Monday, raised thousands of dollars for quake relief, as well as providing a crucial emotional outlet for bands and audiences alike.

Thankfully, most of the town's major musical venues remain undamaged; the Catalyst, Kuumbwa and Cafe Cameleon should all be back in business this weekend, barring unforeseen complications. The fate of many of the downtown art galleries remains questionable, but given the wealth of creative talent in Santa Cruz County, there should be no shortage of work to show. As we all get back on our collective feet, we'll need the arts more than ever to help make whatever sense can be made of the Big Moment.