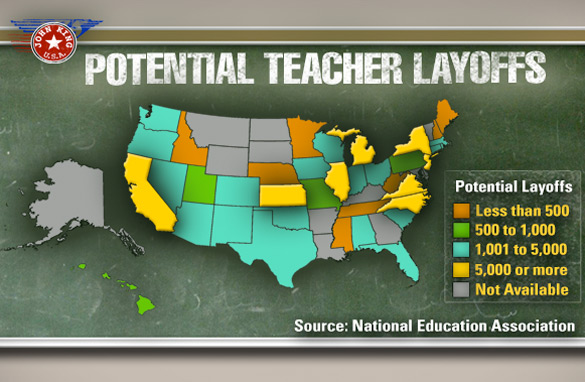 It's spring at last, which means school boards across the nation are preparing for yet another round of teacher layoffs. In Texas alone, 100,000 teachers could be losing their jobs. Mayor Bloomberg is pink-slipping 45,000 in New York City. 30,000 layoff notices have been sent out across California. And here in Arizona, with another quarter billion dollars set to be slashed from the state's education budget, we're just waiting for the other shoe to drop.

Susan Straight calls this what it is, a national disgrace:


This spring rite of passage is scary, shameful, and unnecessary. Were politicians willing to realize how foolish it is to slash budgets for education -- hurting not only children but adults, hurting local economies, and mostly, reversing centuries of American reverence for education and for making sure our children are the most important investment we have -- they might remember some of the most important people who shaped them before they became politicians: teachers, coaches, maybe even a few patient custodians.

This, of course, is the result of the anti-stimulus impelled by conservative governance at all levels of government. First, as you recall, they erased our federal budget surplus by cutting rich folks' taxes, then running up the national credit card with two wars and a corporate welfare Medicare deal for Big Pharma. Then they crashed the global economy through a combination of deregulation and incompetence, requiring a massive cash infusion for Wall Street to avert another Great Depression.

That's when the fun really began. Conservatives in both parties worked to water down President Obama's stimulus package, ensuring its effectiveness would wane by the midterm elections. Conservatives at the state and local level moved to slash spending in the face of a recession, effectively negating the stimulative power of the federal spending. And Beltway conservatives filibustered previously uncontroversial measures like aid to the states or extended unemployment benefits.

The results are predictable, and literally depressing. As a laid-off teacher myself, I can tell you that the last thing I need is more unemployed people to compete with. One local high school dismissed two-thirds of its staff in another misguided "restructuring," and got more than 500 applicants for the positions. I talked to one woman who finally got a new teaching job – after seventy job interviews.

I've spent the year since my layoff burnishing my credentials, adding new endorsements in art, English and social studies, and working to get certified at the secondary, as well as elementary level. But just as these budget cuts cancelled out the stimulus, my enhanced employability is likely to be canceled out by the continuing lack of employment.