People occasionally ask if there will be another update to Take the Rich Off Welfare. 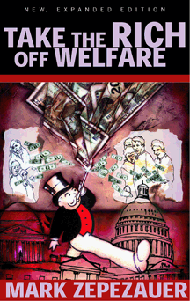 The short answer to that is: maybe someday. The medium length answer is: not soon, but there will be a new edition of The CIA's Greatest Hits this year.

The longer version involves noting that the 1996 and 2004 editions of TROW were both produced at a time when I was working as my own boss, freelancing my work. The first edition was written before I had children, and while both were exhaustive efforts (both books, I mean), producing the update, without a co-author or assistant, while raising kids, was a daunting task.

Since I was laid off from my teaching job last May (thanks, Arizona legislature!). I've been getting by on unemployment checks since then, or at least what's left after taxes (thanks, Ronald Reagan!). And I try to generate income through a combination of substitute teaching, technical illustration, and bartending - though anything I make is deducted from the unemployment check.

Should I secure a permanent position again, undertaking a revision of TROW would require more time than I would have available. The only way to do it justice would be to secure grant money, institutional support, or a sizeable advance – that is, more sizeable than any publisher interested in the work is likely to afford.

In the meantime, though, what I can do is use this blog to link to any articles or discussions I can find on the relevant topics.

Recently, Jane Hamsher of Firedoglake posted a discussion of the military budget, a brobdingnagian topic I tried to masticate in Chapter 11 of TROW. Quoth Jane:

The Defense Department’s annual budget is a phantom figure, falling far short of what we truly spend on defense. It doesn’t include either supplemental appropriations, or money allocated to defense by other departments.

The comments section appended thereto included a lot of useful links, as well.

Also, my favorite blogger, the preternaturally insightful Matthew Yglesias, weighed in on the topic of tax expenditures, which weaves throughout the various TROW chapters. Quoth Matt:

I would say that what’s even more interesting about these tax expenditures is that they actually do much more to benefit the rich than to benefit the middle class.

I'll offer up links to such information whenever I can, and, time permitting, try to dig up some of my own.
Posted by MZepezauer at 1:04 PM