I just heard today that Holy Joe Lieberman is retiring rather than get his butt kicked again in the Connecticut Democratic primary next year. In honor of his impending absence from public life (at least until he gets his talk show on Fox) I dug up this golden oldie from my ZiaZine column: 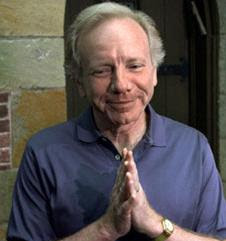 Here we go again. Puritanical blowhard Joe Lieberman has introduced the Media Accountability Act of 2001 in the US Senate, which calls for a new ratings system for the music industry. Worse, it would prohibit the “marketing” of “adult-rated” music to minor children. I’m no fan of the usurper regime currently occupying the White House, but I have to say this is one reason I’m glad Joltin’ Joe and Tipper’s husband aren’t running the show either.

Given the fact that Joe’s bill wouldn’t even pass scrutiny by the corrupt mediocrities on the current Supreme Court, you have to know it’s just posturing on his part. But it’s not exactly empty posturing, either. Let’s all remember what happened the last time around, when Mrs. Gore and her allies inspired a season of public hand-wringing and Congressional hearings over the corrupting influence of rock and rap on our nation’s impressionable youth. Just like the movie industry in the 30s and the comic book industry in the 50s, the music moguls caved in and came up with a “voluntary” system of self-regulation - those “parental advisory” stickers which can now be found on t-shirts in the hipper parts of town.

Just as Frank Zappa and other critics warned at the time, this voluntary self-censorship has evolved into a de facto public censorship, governed by Wal-Mart instead of the Federal Trade Commission. The big labels and the national retailers combine to coerce artists into releasing bowdlerized versions of their albums. If they refuse, they don’t get stocked. Meanwhile parents are lulled into the belief that avoiding any albums with the official Nasty sticker absolves them of the responsibility of checking out what little Janey and Johnny are listening to.

Except that the ambiguous standards on language and content aren’t being equally applied. Just as the prophet Zappa predicted, the self-interested alliance of capitalists and moralists tends to target black and gay artists more than, say, white and straight ones. In the meantime, there is not one shred of evidence that listening to NWA will make otherwise well-adjusted youngsters acquire an arsenal of semi-automatic firearms and begin dealing crack on street corners. Nor have any studies shown that an otherwise heterosexual teen exposed to Pansy Division will suddenly switch to same-sex affection. And we have yet to hear of an epidemic of Eminem fans raping their mothers.

Nobody becomes a Nazi because they heard some catchy little Nazi song. They become Nazis because of an arrested adolescent fixation with conformity, authority figures and scapegoating. And a forced regimen of wholesome musical selections isn’t going to fix that real quick.

I should hasten to add that some studies have shown a link between repeated exposure to violent movies and a subsequent relaxation of inhibitions against violence - but that doesn’t even begin to quantify whether other factors, like a violent home life, may be a factor. That evidence, though, only makes the movie industry’s voluntary ratings system - in which kids are protected more from naked body parts than from violently shredded bodies - that much more of a farce.

When the music industry caves in again to get self-appointed thought police like Lieberman and C. Delores Tucker off their backs, we can expect similar distortions in what is and isn’t dubbed officially inoffensive. For instance, does Bob Dylan’s “Ballad of Thin Man” contain homosexual imagery? Well, maybe it does and maybe it doesn’t; it’s a matter of interpretation. Do you want a committee of accountants and politicians doing the interpreting for you?

Folks, if your wee lads are suddenly obsessed with violent music, it might be clue that something might have been a bit awry in your parenting choices in the first place. Or it could just be a normal phase of youthful fascination with morbidity. In either case, other clues should be available. And you will have had at least a decade in which to expose them to a wide variety of music with more palatable moral stances, and many other opportunities to instill the belief that conflict resolution need not involve high-speed projectiles.

Any adolescent worthy of the name will take great delight in finding some form of music you find repugnant or excruciating - just like you did, remember? But if you did your job well in the first place, within a few years, your little genetic experiment should be turning you on to interesting new music. In the meantime, you don’t need Joe Lieberman to tell you what your kid will and won’t spend the allowance money on. If you and Joe think those stickers and those ratings are going to keep nasty thoughts out of your baby’s head, you’ve probably blotted out most of your own adolescence through excessive substance abuse. Shame on you.
Posted by MZepezauer at 8:41 PM