Word is that, for the fifth presidential election in a row, Newt Gingrich is "thinking about" running for president. I'm pretty sure God doesn't love me that much, but, just in case... I rustled through the archives and found an account of the last time he held public office, which came to a rather abrupt end, twelve years ago, right in the middle of the Clinton impeachment debacle. Read on: 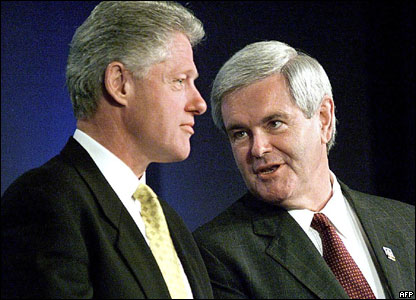 That chubby, white-haired, perjuring, philandering, draft-dodging, pot-smoking, ethically challenged politician has been bounced out of office...it just wasn't the one we expected.

The reason I can take so much schadenfreude in the humiliation of Newton Leroy Gingrich boils down to two words: hubris and hypocrisy.

Newt's comeuppance was long overdue, and the polarizing partisanship with which he approached his duties makes it all the sweeter. Newt made it clear that he regarded people like me as the enemy, so it should be no surprise that we returned the compliment. He was full of hubris from day one - despite his fine speech when first he grabbed the gavel, expressing his admiration for FDR. If he had governed in that spirit, he might still be in power. But he never tried to live up to that lofty rhetoric. He never ran the Congress as if it represented all the American people - only the "right" ones.

Partisanship has its place, but Newt and his troops swept into town like an occupying army, and his hubris knew no bounds. He declared himself an arbiter of Western Civilization. He compared himself to Churchill and Lincoln. And he saw himself leading a conservative "revolution" that would realign American politics for a generation. What he didn't see was that the 1994 elections represented a reaction against Clinton, not an endorsement of Gingrich.

There's nothing "conservative" about dispensing corporate welfare to military contractors and gutting regulations for polluters. But there's nothing all that unusual about it either - just look at the new Speaker. What made Gingrich unusual is that even his allies grew to distrust him. It became clear to many of them that his cause wasn't a conservative revolution, it was a Gingrich revolution. That revolution has been stymied, and we can all applaud that.

His ultimate hubris was to disregard ten months of evidence that a majority of Americans don't want the President to be impeached. In the face of that, Gingrich tried to turn this election into a referendum on Clinton - and instead turned it into a referendum on himself. It's not so much that Americans admire Clinton - a majority do not - but that the rank hypocrisy of the Republicans irritated them enough to want to support the President.

Ever since Clinton took office, the right - led by the thrice-married draft-dodger Limbaugh - have denounced him as a pot-smoking, draft-dodging womanizer. And who do they hold up as the alternative but the pot-smoking, draft-dodging womanizer Gingrich? This is the man who served divorce papers on his wife while she was recovering from cancer surgery. Some arbiter of Western Civilization.

The commentator Jimmy Tingle has compared the public's reaction on Clinton/Lewinsky scandal to the Rodney King case. Most Americans believe that what Rodney King did was wrong. But when they saw the LA police on videotape, kicking the stuffing out of him, it wasn't Rodney they wanted to see punished. The GOP broadcast their own videotape of Clinton's wrongdoing, but in exposing his most intimate moments to millions of people, they made themselves look like a pack of out-of-control LA cops.

You can say that Clinton/Lewinsky is really about perjury and obstruction of justice, but so too were Gingrich's numerous cases before the House Ethics Committee. Because the chair of that committee owed her seat to Newt, he got charges dismissed and a tap on the wrist. Just the week before the election, another set of charges against Newt was dismissed. The committee, though, admitted the charges were true - it's just that they happened so long ago, that it just didn't make sense to take them any further. These violations took place in 1991 - the same year Bill allegedly wagged his weenie at Paula.

You can say that it's an outrage that Clinton expects us to believe that oral sex isn't sex - but that's exactly the same rationale Newt uses in his extramarital affairs. No, it's really too late. I might have gone along with the Republicans if they had approached Clinton's wrongdoing with the same bipartisanship with which both parties approached Richard Nixon's crimes.

But like everything else Newt Gingrich touches, it was suffused with hubris and hypocrisy. For all the above reasons, I find poetic justice in the fact that Newt is suffering the fate he was preparing for Clinton - humiliation and removal from office. It couldn't happen to a nicer guy.

But what I don't take cheer from is the obvious fact that without Newt, the Republican Party is stronger, not weaker. Presumably his fundraising acumen is still at their disposal, but he is no longer a lightning rod for voter discontent. And speaking on behalf of the nation's political cartoonists, I can only say, we're going to miss you, Newt.
Posted by MZepezauer at 4:14 PM