This review appeared in the Santa Cruz Sun in October 1989. An unofficial tribute site for Baker can be found here. The film is not currently available in a US-formatted DVD, and Amazon wants 200 bucks for a VHS copy. But if you can find it for less - a lot less - it's more than worthwhile. 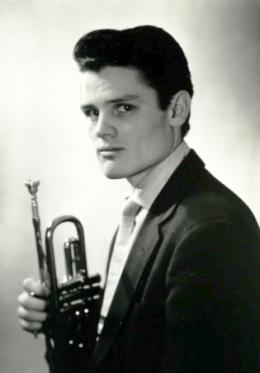 "I must have lived several lifetimes," sighs the great doomed jazzman Chet Baker toward the end of Let's Get Lost, a nonfiction feature film that covers most of them. Chet Baker lived the life of a highly acclaimed young trumpeter and vocalist, an international cult figure and sex symbol, a hounded junkie pursued by paparazzi and police, a toothless has-been pumping gas in San Francisco, and a frail genius resurrected by friends and admirers. Among the admirers was filmmaker Bruce Weber, who spent a lifetime with Baker recording scenes from his last year on earth.

Let's Get Lost tells the story of Baker's lives as a loose, impressionistic collage, anchored by the one constant in his chaotic existence: the ghostly beauty of his music. The films' style was dictated by necessity, due not only to the miniscule (by Hollywood standards) budget, but also to the physical elusiveness of the subject, who would disappear for weeks without a trace.

It works splendidly, though, as Weber ties together his gorgeous black-and-white footage of the ravaged Baker at work and at play, bitter ex-lovers and children, vintage clips of the angelically handsome young trumpeter and disquieting interviews with his final incarnation. Baker's wounded-animal eyes, sunk into his deeply crevassed face, speak more eloquently than his evasive, whispered replies to Weber's queries.

Like any addict, Chet Baker left a trail of emotional wreckage behind him. The portrait that emerges is that of a slick and manipulative con man, occasionally prone to violence, who hurt anyone who ever cared about him. To a person, though, they all suggest a willingness to take him back, forgiving him his trespasses, such is the power of his charisma. In the end, the filmmakers have fallen in love with him, as has the audience, in spite of the coldness of his addiction. Baker's inner warmth and tenderness emerge, not only in the love he inspires, but most movingly in the purity of his singing and playing.

Weber is to be commended, not only for the lyrical quality of his cinematography, but for focusing so unswervingly on the myth of the self-destructive hipster. Despite his work as a fashion photographer, Weber's look at the tragedy of Baker's lifetimes drains the considerable glamour surrounding its subject, revealing the dark flipside of his magnetic attraction.

Besides providing a balanced and heartfelt biography, Weber served his subject well by documenting his still-potent artistry during the last months of his life. Like Dizzy Gillespie, Herbie Hancock and Elvis Costello, Weber gave the man work when he needed it, giving him much-needed exposure and dignity.

Even in his youth, Baker's voice was never strong, but he could bring even the most banal lyric to life with his quaverly emotional timbre. What a revelation, then, when Let's Get Lost closes with Chet wrapping his aching vocals around Costello's "Almost Blue." With its images of "flirting with disaster," or women's eyes "red from crying," it seemed to be written just for that moment. "Almost blue/it's almost touching/it will almost do," he whispers, "there's a part of me that's always true."

Weber's clear-eyed look at his hero, Chet Baker, which never flinches when confronted with the broken manchild he had become, never forgets the part of him that was always true.
Posted by MZepezauer at 7:37 AM