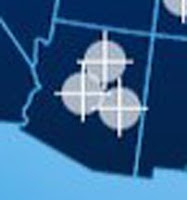 About a year ago, I stood in the Tucson office of Representative Gabrielle Giffords. It was the height of the battle over health insurance reform, and I had come to urge a yes vote on the legislation. After I spoke with her staff member, an elderly man behind me stepped forward and began threatening the Congresswoman with reprisals if she voted for the hated bill. To be sure, the reprisals he referred to were electoral; he made it clear that he would work for her defeat in the next election. But his tone and body language were so ugly that I stepped back in line behind him.

I wanted to bear witness, to make sure the situation didn't escalate. But I also wanted to ask the aide for the address of the campaign headquarters, so that I could donate money to her re-election efforts. She isn't my representative; I have the honor of living in the district of Rep. Raúl Grijalva. Nor is she the sort of Democrat I would normally give money to; her district is evenly split ideologically, requiring some fence-straddling on positions that don't reflect my views.

But given the quality of her enemies, she deserved my support. I spoke to the zealot outside, and he was spouting boatloads of misinformation about the health insurance debate. We could not engage in a rational discussion of the issues, because we lived in two separate factual universes. As we parted, I assured him I would do everything I could to counter whatever energy he invested in Rep. Giffords' defeat.

The campaign that followed, both nationally and in Tucson, was just as ugly. A week later, bricks were heaved through the window of that same office. Shots were fired at Rep. Grijalva's office, and on another occasion, his staff was evacuated due to an anthrax scare. Signs appeared around town declaring "Gabby Cut My Medicare" or "Gabby Stole My Social Security." Giant cartoon billboards denounced her as "Pelosi's Puppet" - ludicrously, in light of this Wednesday's vote.

Gabby Giffords came to be opposed in the general election by someone spouting the same garbled nonsense as the lunatic in her office. He staged a fundraiser at a gun range, advertising that his supporters could help "remove Gabrielle Giffords from office" by joining the Republican candidate in firing off a "fully automatic M16." Sarah Palin, meanwhile, literally put her district in the crosshairs. Newly deregulated campaign cash flowed in from across the nation, spreading lies about Giffords dozens of times each night on my TV. And up in Nevada, a candidate for national office muttered darkly about "Second Amendment solutions" should electoral solutions prove unsatisfying.

I was close enough to today's shooting to hear the sirens of the emergency vehicles racing to the scene - and close enough emotionally to know relatives of the victims, as well as the hospital staff working to comfort them. As I got into my car and drove home, I tuned in the local right-wing radio station, where, it seemed to me, both hosts and callers seemed exceedingly eager to paint this as a senseless tragedy unrelated to the politics of the moment.

Sure, they conceded, some media personalities had used "incendiary rhetoric" - but they had never advocated for any such thing as today's tragedy. This was the work, they said, of one unhinged mind (or not?).

But this ignores not only the potentially lethal combination of incendiary rhetoric with unhinged minds, but the long litany of recent right-wing violence, some of it explicitly inspired by these same incendiary rhetoricians. It seems to me that just as it would be premature to assign political motives to the assailant without knowing the facts, the reverse is also true. It's premature to declare this unconnected to the aggressive mendacity of our national discourse.

This sick feeling in the pit of my stomach reminds me of the 60s and 70s, when government by gunplay was nauseatingly frequent. In those days, though, the passions involved peoples' lives being tossed around by the tides of history - the civil rights movement, the war in Vietnam, the demands for equality from downtrodden communities, the tectonic shifts in political alliances.

Today we have centrists being gunned down in the streets. We have fervent acolytes of demagogues tossing bricks, mailing powders, displaying nooses, targeting home addresses, "curb-stomping" opponents - over a watered down compromise modifying the regulation of the health insurance industry. People have been warning that the kind of irresponsible,over-the-top attacks being hurled around these days would inevitably lead to the kind of thing that happened today in Tucson. People were right.
Posted by MZepezauer at 3:41 PM