With the centennial of Reagan's birth coming up next month, I thought I'd dust off my obituary of the old boy. It appeared in the Santa Cruz Comic News and was also posted over at CounterPunch, where it generated some interesting hate mail.

Ronald Reagan himself wouldn't recognize the Ronald Reagan today's conservatives are peddling. Back in the day, he could vex the right as well as the left. As we rewrite the late Gipper into our history books, the pundits claim Dubya to be Reagan's political heir.

But they're only half right. Bush the Lesser emulates Reagan's weaknesses, while discarding his virtues. Reagan's chief virtue is that he was never as naive or as stubborn as George W. Bush.

Today's GOP is the party of all tax cuts, all the time. The current administration has cut taxes every year since they came to power, promising more of the same. According to Dick Cheney, "Reagan proved that deficits don't matter." But Reagan himself might beg to differ.

As bad as Reagan's deficits were, they'd have been much worse if he hadn't had the sense to realize when he'd made a mistake. Government revenues fell sharply following his 1981 tax cut--exactly the opposite of what "supply-side economists" had predicted. So Dutch signed a bill that repealed fully a third of the original cut.

Reagan, in fact, raised taxes four times in his first term alone. That includes the largest tax increase in history. Republicans like to claim that title for Bill Clinton's 1993 tax bill, but if you use constant dollars, Ron's 1983 package comes out ahead. Of course, Clinton raised taxes for the wealthy and then later cut taxes on working folks, while Reagan did just the opposite.

After his initial tax cuts heavily favored the wealthy, Reagan signed off on a regressive payroll tax increase that plugged the actuarial hole in the Social Security program. As a result, the trust fund is solvent until the year 2042, but 80% of the population pays more in payroll taxes than in income taxes. The Reagan administration was then able to mask the true size of their deficits by borrowing from the Baby Boomers' retirement funds--just as Bush is doing today.

Of course, Bush's pilfering is more dangerous, because the Boomers will start retiring soon. Some future president will have to pay that IOU, just as Bush the Elder and Bill Clinton did to wind down Reagan's borrowing binge.

But Reagan also championed the EITC and Head Start, two anti-poverty programs the Bushies seem intent on diluting. Meanwhile, they won't reverse course no matter how deep a fiscal hole they dig for future taxpayers to fill. In fact, Bush is determined to make all of his tax cuts permanent. That should top Reagan's achievement in adding two trillion to our national debt. Reagan at least expressed some remorse over this; his "heirs" simply claim it makes no difference. Likewise they consider themselves Reaganesque in deposing Saddam, just as Ron supposedly won the Cold War. But Reagan didn't march on Moscow; he had forty years of containment policy to back him up. And the Soviets dismantled their own empire, recognizing its futility. As Mikhail Gorbachev told Reagan, "We are going to take away your enemy."

Since Saddam was obviously no threat to us or his neighbors, Iraqis might well have overthrown him themselves had we simply continued our successful containment policy. But more to the point, the neocons who urged Reagan to shun Gorby are now building an evil empire of their own, complete with gulags. 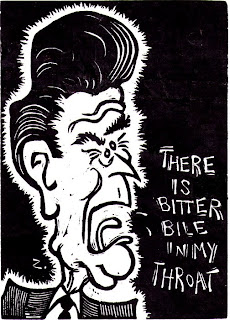 Bush emulates the Reagan who cozied up to the Khmer Rouge, armed the death squads of Latin America, and enabled the mercenaries of apartheid. Today we pat ourselves on the back for deposing the Taliban, but wink at the dictators of Pakistan and Saudi Arabia, and throw money at murderous regimes in Uzbekistan and Columbia.

Absent from neocon mythology is the Reagan who avidly pursued disarmament. For obvious reasons, they'd rather not talk about how Reagan ignored the fevered advice of Cheney and Richard Perle, choosing to pursue negotiation rather than confrontation with Gorbachev.

Alarmed by Reagan's saber-rattling, a million Americans marched to demand a nuclear freeze. In his second term, Reagan nearly went them one better, negotiating a mutual nuclear purge with Gorbachev in Reykjavik. Good Reagan wanted to get rid of all our nukes, but bad Reagan couldn't let go of his absurd Star Wars fantasy, and the deal foundered.

Bush considers disarmament treaties a useless irritant. He's bent on deploying Star Wars whether it works or not. He hires Iran-contra felons that Reagan saw fit to fire. He blunders into Baghdad, thinking it would be as easy as knocking over Grenada. Instead he's reprised the intervention in Lebanon. Hey, at least Reagan had the sense to know when we're not welcome.

Bush's handlers love to spin him as the second coming of the Gipper. But to paraphrase Lloyd Bentsen, I lived through the Reagan years, and believe me, Dubya is no Ronald Reagan.
Posted by MZepezauer at 5:47 PM