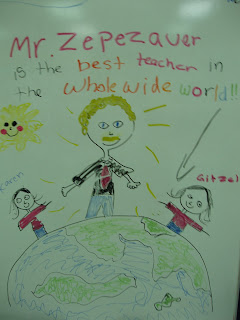 According to the Bureau of Labor Statistics, there are 14.1 million unemployed persons in this country. As of yesterday, I'm not one of them.

I signed a contract with a local district to teach 7th grade language arts for the 2011-2012 school year. What's especially sweet for me is that I'll be teaching some of the same kids I taught as 3rd graders in 2007 and as 5th graders in 2009. Watching their progress is wonderful, and being a part of it is humbling and gratifying.

If you're just tuning in, I was laid off last May after several rounds of budget cuts to K-12 education from the Arizona legislature (and they're not finished with that, either). My job was saved from elimination in the 2009-2010 budget only due to President Obama's stimulus package. But that funding ran out, and the district ended up cutting jobs for 2010-2011. After the legislature cut the education budget still further, salaries were reduced as well, so I'll be making about what I did as a rookie.

But the "good news" is, if more jobs are eliminated next year, I have as much chance as anyone else of surviving. That is,  the last round of layoffs was based on seniority – everyone with three years or less experience was let go. But Arizona has also eliminated teacher tenure. So a 30-year veteran faces the same prospect of layoffs as I do – without due process.

What this means for the blog is that I'll probably be posting less frequently beginning next month – though that's already dropped off as I've spent more time with my kids during their summer vacation. I'll continue to write about education policy, though I won't mention names of students, staff, or the school. But I will be able to comment from the trenches about how policies at the federal, state and local level are affecting our kids. Hopefully the Arizona legislature won't outlaw that as well.
Posted by MZepezauer at 7:32 AM