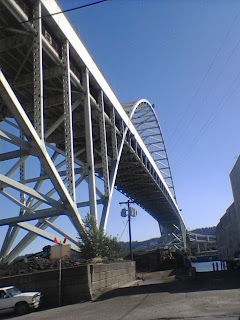 Friday morning we drove out along the Columbia River Gorge until we reached the breathtaking Multnomah Falls. What was even more breathtaking was that we hiked all the way to the top. Because of the steep vertical ascent, it felt like a lot longer than the advertised one mile trail, but the view from the top was worth every step. And after sampling the wares of so many of Portland's fine breweries over the previous three days, I had plenty of extra calories to burn off.

That evening we travelled downtown to see the Reverb Brothers. One of our hosts is a band member, and they hold a long-standing Friday evening happy hour residency at the White Eagle Saloon in the Lloyd District. On the way we stopped so I could get this shot of the Fremont Bridge, my favorite of the eleven Willamette River spans in the downtown area.

The Reverb Brothers describe their music as "1930's Swamp Rock - fun songs about death, drugs, sex and despair." They mixed covers by Slim Harpo, Johnny Cash and the Stones with like-minded originals. Claes Almroth, who played harp, keys and sang lead vocals, was as generous in spirit with his singing as he had been in sharing his house with us all week. And I managed to sample enough local brews that I need another waterfall to walk up. And so a good time was had by all.

Today, Saturday, was our last day in Portland. But today is over, so I'll tell you about that tomorrow.
Posted by MZepezauer at 11:59 PM