Preparing this old book review for posting was pretty depressing. We've wasted another twenty years, with obvious solutions sitting on the table, and no real prospect of dealing with them anytime soon. Read it and weep: 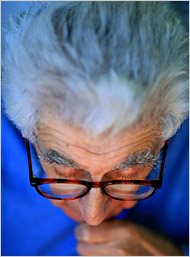 When environmentalist Barry Commoner ran for president in 1980 as the candidate of the now defunct Citizens Party, he made so much sense that he was roundly ignored. As one incredulous reporter put it, "Are you a serous candidate, or are you just running on the issues?" In desperation, Commoner generated the only headlines of his campaign by characterizing the stands of his major party opponents – accurately – as "bullshit." Now, after a decade of environmental backsliding spearheaded by the man who defeated him, Commoner is back with a dollop of much needed common sense.


In his new book, Making Peace With the Planet, Dr. Commoner spells out the science of environmental degradation in precise layperson's terms, describing it as a war between the ecosphere and, in his coinage, the technosphere. His description of the biochemical effects of such compounds as dioxins, nitrates, chlorofluorocarbons and sulphur dioxide leaves no doubt as to the seriousness of the crisis we face. Commoner is also no less certain about the means we must take to avert disaster.

At first blush, Commoner appears to be that rarest of environmentalists: an optimist. There are simple solutions to our predicament, he insists. Commoner disdains both the confrontational stance of the Earth Firsters, whom he terms “anti-humanist,” and the compromises of old guard environmental organizations. Rather, he aligns himself with grassroots organizations such as the National Toxics Campaign and Ralph Nader's Public Interest Research Groups.

Commoner's blueprint for environmental resuscitation calls for massive public-sector investment into ecologically compatible products, similar to the Pentagon's stimulation of the semiconductor industry a generation ago. There are, he explains, existing technologies in transportation, agriculture and power generation that will reverse the damage to our ecosphere.

All that is needed, of course, is to implement them. Instead, we have wasted 20 years and billions of dollars on a corrupt and inefficient bureaucracy – the EPA – that fecklessly tries to regulate harmful effects of our current technologies down to "acceptable risk levels" The only true solution, Commoner points out, is to prevent pollutants from entering the environment in the first place.

As he patiently explains the benefits of biomass fuels, solar energy, organic farming and the like, Commoner permits himself only an occasional dry aside at the hypocrisy and stupidity of the Reagan/Bush administrations. He fully understands, however, the radicalism of what he is proposing, and he builds his case slowly and logically before arriving at the meat of his argument in the final third of the book.

The problem, he asserts, is that decisions regarding the use of technology are made by corporations interested only in maximizing short term profits. These decisions should be made instead in a democratic process that takes into account the common societal interest a healthy environment. Thus, the purchasing power of the federal government should be invested into the purchase of nonpolluting vehicles, photovoltaic cells, subsidies to organic farmers and the like, stimulating the market for such items.

Furthermore, says Commoner, much of our global crisis results from the north/south imbalance of resources. The north imports wealth from the south, mostly by exchanging military hardware for debt, while exporting pesticides, pharmaceuticals and other dangerous technologies to the developing countries.

In order to avert ecological disaster in the Third World, we must bring down birthrates by raising standards of living. Therefore, Commoner says (somewhat blithely), the industrial powers ought to wipe out the trillion¬ dollar Third World debt as a form of reparations for the centuries of damage caused by colonialism. Finally, he proposes, in order to facilitate the global transition to ecologically benign technologies over the next decade – at an estimated annual cost of perhaps $500 billion – we "simply" have to cut global military expenditures in half.

Commoner is the first to admit that his ideas are easier proposed than implemented, but he points out that the consequences of failing to alter our present course will be misery on an unprecedented scale. He also cautions against regarding any politic al shift as impossible, given the extraordinary events in Eastern Europe over the last year. This is a time, he writes, when “heady optimism” is justified, given “the willingness of powerful nations to reexamine– and change– their internal distribution of both goods and political power, even if,” he notes drolly, “such willingness is – thus far – limited to the Soviet Union and its allies.

Commoner compare the radical evolution of his thinking to the last years of Martin Luther King Jr., who found that “the root of racial discrimination is also the root of poverty and war.” Similarly, Commoner has discovered that the economic imbalances of relentless militarism and colonial exploitation are fundamentally intertwined with the ecological imbalances of our growing environmental crises.

After Bhopal, Chernobyl and Valdez, one would hope that Commoner's analysis, however threatening to the status quo, would meet with a more receptive audience than it did a decade ago .The mostly indifferent response to his book thus far, however, would indicate otherwise. We ignore his ideas, however, at our peril, and his simple solutions – no matter how difficult they are in practice – will not get any easier another ten years hence.
Posted by MZepezauer at 10:21 AM