Rummaging through the diminishing archives, I found another burning example of how climate change was a looming danger more than twenty years ago, and how little has been done since then. And according to a Scientific American article published today, we're literally reaping the whirlwind. 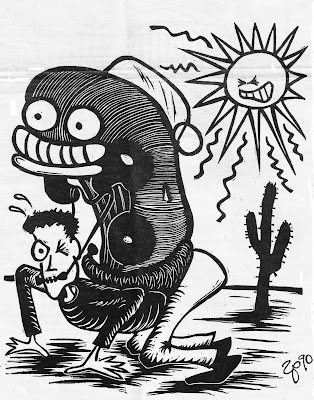 There is virtual unanimity among scientists that if present trends continue, the home planet is in for some serious warming. So what can you do about those present trends? The answer may be parked out in your driveway. If you own a car, it is one of 400 million such vehicles - with over a quarter of that total here in the United States - each of them spewing its weight in carbon dioxide every year.

While it may not be your intention to bake the old biosphere, you might be faced with precious few alternatives for getting from point A to point B. At the same time, our century-old exercise in "auto-erotica" may be reaching critical mass: for many of us, the damn things are getting to be more trouble than they're worth. No matter how many new roads and parking lots we build, we're still packed in like steel sardines. The average commuter’s traffic speed keeps slowing down, while the mean global temperature just keeps getting meaner.

How did we get into this mess, anyway? One person you may wish to thank is the late E. Roy Fitzgerald. In 1949, Fitzgerald was convicted for being pail of a criminal conspiracy to rid the nation's cities of their highly efficient electric trolley systems. Convicted in the case, along with Fitzgerald, were General Motors, Standard Oil, and Firestone Tires. .According to Russell Mokhiber 's "Corporate Crime and Violence" (Sierra Club Books, 1988), Fitzgerald headed a covertly funded front company which bought up municipal streetcar, systems and ripped up the tracks during the 1930s and '40s. Those tracks could have formed the core of urban mass transit systems for virtually every metropolitan area in the United States. Had efficient mass transit been developed, the fat cats involved in the conspiracy would not have sold as many cars, tires, and gasoline as they did.

You might think the conspirators would have learned a lesson from their conviction. However, Fitzgerald and the other principals were fined exactly one buck (that's $1) each for their premeditated murder of the nation's urban mass transit systems.

Another conspirator in creating our dependence on the automobile is the federal government. Through the power of subsidies, it kept the domestic price of oil artificially low, encouraged the use of trucks rather than freight I trains, and built up our now-crumbling and overcrowded highway system. It is those free- ways that encouraged land-use patterns enabling millions of Americans to settle great distances from their work places - though that is small comfort now that we sit in mind-numbing traffic jams on the way.

Michael Renner of the Worldwatch Institute estimates that current government subsidies to the automobile may reach as much as $300 billion a year. Factored into this equation are not only the costs of road building and maintenance, but also of municipal services, accidents, health care, and tax losses from paved-over land (which amounts to .15 acre for every child, woman, and man in America). "If all of these expenses were reflected in retail fuel prices," notes Renner, "gasoline could be $4.50 a gallon."

Aside from the monetary costs, there is the annual toll of 50,000 human lives lost in traffic accidents - roughly equal to the total number of Americans killed in the Vietnam War. Additionally, University of California researchers estimate that cancer and other diseases resulting from the production and use of gasoline and diesel fuel may account for up to 30,000 premature deaths every year, plus $40 billion in health care costs and lost productivity. None of the above takes into account the current or eventual costs of acid rain or ozone depletion.

The use of natural gases is more efficient than alcohol fuel, but both methods, although cleaner than gasoline, emit unacceptable levels of greenhouse gases - especially when multiplied by 400 million vehicles.

Hydrogen - the most abundant element in the universe - may be the clean-burning fuel of the future. Widespread use is still a long way off, especially in this country, where hydrogen research lags far behind Japan, Canada and West Germany. In the 1970s, America led the world in research into advanced fuel efficiency, until the Reagan Revolution slashed funding by-S5 percent, while rolling back fuel efficiency standards at the same time. The recently proposed Bush budget cuts funds for energy conservation by 50 percent and aid to mass transit by 25 percent.

Until General Motors and Standard Oil decide to sell hydrogen-powered cars, the most viable alternative is the electric vehicle. Recent prototypes can go up to 110 miles on a. single charge, travel up to 70 miles per hour, and theoretically emit no pollution (depending on where you get your electricity from).

With the declining price of photovoltaic cells, solar-powered electric cars are a realistic possibility, and would represent the best of all possible worlds. You'll probably have to build it yourself if you want it soon. The folks at General Motors and Standard Oil are in no hurry to bring it to market. Perhaps someone should fine them another buck.

In the long term, we can wait for the powers that be to provide us with alternative transit systems or cleaner fuels. In the short term they may even mandate cleaner or more efficient internal combustion engines. In the meantime, the forests keep dying and the Fahrenheit creeps ever upward.

If you get tired of waiting, you might want to move to Europe or Japan, where efficient and convenient rail systems have never disappeared. Bike-and-ride systems are also quite popular. In Tokyo, there is a well-guarded 15-story bicycle garage. In the Netherlands, the entire country is connected by a bicycle freeway system, complete with over- and underpasses and on- and off-ramps.

If you'd rather stay where you are, there is a proposal on the table right now for a railbus system running from La Selva Beach to Felton on existing Southern Pacific Railroad tracks. Bruce Douglas, a Washington, D.C. consultant, estimated it could be built for some $24 to $70 million. Unfortunately, he also told the County Transportation Commission that most of the drivers clogging Highway 1 during rush hour would never use such a system, prompting Santa Cruz Mayor Mardi Wormhoudt to wonder aloud why they should bother building it.

One thing's certain: if it doesn't get built, nobody will use it. And if there isn't any public support for it, it's not going to get built.

To paraphrase Smokey the Bear, only you can save the planet. You can let your county supervisor know that you think a railbus system is a good idea. You can let your Congressional representative know that you disagree with Bush's budget priorities. You could even get angry, because if there's one thing that upsets the powers that be, it's an aroused citizenry.

But most of all, you could leave that car parked in your driveway, and hop on a bicycle or a bus as often as possible. Because if you think your friends at General Motors and Standard Oil are going to save the planet for you, you might also be interested in purchasing some prime oceanfront property, near Prince William Sound.
Posted by MZepezauer at 2:16 PM