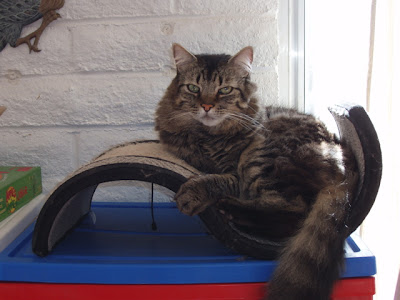 I've known a lot of cats in my day, having lived with twelve of them over the years. But I just buried the eleventh one, a feisty character named Gil. He's survived by his sweeter but dimmer brother Gus.

Gil and Gus came from the same litter, we were told at the adoption agency, and Gil had survived some sort of ailment that left one eye permanently clouded. He was a sickly kitten, but soon made up for it with a prodigious appetite, and grew up to a healthy weight.

Gil, unlike his brother, did not suffer fools gladly. Gus will let any toddler manhandle him any which way for hours on end. But if Gil didn't like the way you were petting him, he'd let you know about it. Nevertheless, he was always friendly with strangers, sidling up to plumbers and other visitors, sometimes leaping right up into their arms. 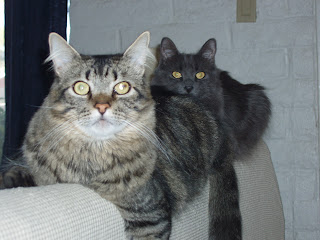 With me, he had a way of just draping himself around my neck like a mink stole, purring away while I craned my arm back to try and pet him where he preferred. When I came home from work, he'd come running up like a little dog to greet me. Gil was a one-man cat, and I was his man. I was his best friend in the world. I've loved many a cat, but never had one love me quite that much.

A few months ago, Gil developed what looked like an infected bug bite on his nose. It was treated with antibiotics, antibacterials and antifungals, but nothing seemed to work. At that point the docs had pretty much ruled out everything but cancer, and it was too far along. Radiation therapy was the only hope, but the chances of surviving that ordeal were slim. By last week we had reached the unmistakable point where the kindest thing we could do for him is to set his spirit free. We spent a last day together trying to pour a bit more love into him while we could.

On Sunday I drove him down to the vet to get Gil a ticket to the next world, and held him in my arms while the injections ceased his suffering. We buried him in the yard under a rainy moonlit sky, next to four of my other twelve cats who have passed on since we moved to this house. I sang "Brokedown Palace" for him, and my grieving children tossed handfuls of dirt on his little cardboard coffin.

Now it's just us, and Gus. Plus that goofball dog we live with. But it'll never be the same without Gil, and I miss him every day. So long buddy, and thanks for all the purrs.

Email ThisBlogThis!Share to TwitterShare to FacebookShare to Pinterest
Labels: meta