That Was the Year That Was

It's time now for a year-end list enumerating my favorite music from the past 52 weeks. Every December I send in my votes to the Village Voice's Pazz & Jop critics' poll (the results of which are due in a few weeks). To arrive at my Top Ten list, I run through my iTunes folder for the year (about 800 songs), forming about a dozen different playlists of 18-22 tracks each. These I burn onto CDs and hand out as holiday gifts to friends, family and colleagues. In this way I serve a a bridge between those who know a lot more about music than I do, and those who lack the time or passion to track down as much new music as me. In the process of selecting and refining tracks for these lists, I winnow down my favorites to the ones that have the most emotional resonance for me.

This year the Dirty Projectors (pictured above) ended up on the top of the heap with their masterful 7th album, Swing Lo Magellan. More on them below; the various sub-lists leading up to the master list went as follows:

Avant: These bands are all, if not cutting edge in the way the term avant-garde implies, possessed of a shared aesthetic involving quirky and angular rhythms, melodies and harmonics. The Projectors have always been my favorite in this genre, but this year featured a bumper crop of releases from bands such as Tame Impala, Micachu and the Shapes, Deerhoof, Yeasayer and previous Pazz&Jop champs Animal Collective. My tied #1 faves from last year, Tune-Yards and St. Vincent, fit comfortably into this category (the latter showed up on this year's playlist with a collaborative effort with David Byrne, while the former contributed a track to the Red Hot + Riot 2 compilation). This year I was lucky enough to see both Garbus and Clark when their brief tour rolled through Tucson, and caught another great quirk-rock double bill, Of Montreal and Deerhoof, at the same venue. I once made a mixtape called "Kid B," celebrating the collective lineage of these bands from the world's strangest #1 album. But another antecedent, Public Image, Ltd., showed up with a welcome comeback entry this year as well.
Dirty Projectors: Gun Has No Trigger

Americana: This list spans the turf covered by trad country and folk at one end, alt-country and country rock at the other, and everything in between. The massive success of Mumford & Sons proved once again that you don't have to be American to do Americana, but it helps. I'm not immune to their charms but this year I was bowled over, like many others, by the timeless tones of Alabama Shakes - folks apparently born 40 years too late, but fitting in fine nevertheless. It was great to hear from oldtimers like Nanci Griffith, Dwight Yoakam and especially Iris DeMent (pictured). I remember playing their stuff when I worked for the world's greatest Americana radio station, KPIG, in Freedom, CA. Younger folks like Ned Sublette and Kellie Pickler came on strong. Kelly Hogan made one of the year's best albums, but for me the single of the year was Willie Nelson's remake of Pearl Jam's "Just Breathe."
Willie & Lukas Nelson: Just Breathe

Catchy: Thanks to my kids I listened to a lot of Top 40 radio this year, and there was an awful lot of ear candy. This had to be one of the best years for catchy tunes since the early 90s, if not 1984. I certainly   couldn't resist the relentless ubiquity of "Call Me Maybe" and "Gangnam Style," or their myriad parody videos. My boy loved Neon Trees and Maroon 5 and my girl was fond of Ellie Goulding's "Lights." Of course there was plenty of crappy stuff on the radio, too (I'm lookin' at you, Flo Rida) and a lot of great tunes that never got within a mile of a radio playlist. Kishi Bashi wowed me when he opened for Of Montreal last fall, and his "Bright Whites" has a certain indelibility to it that deserves wider exposure. Even better is the awesome single "We OK" from the Very Best. Radio formats opened up a bit wider than in recent memory, with room for a little country twang and indie crunch amid the divas and thugs. But it's still a long way from the freedom that DJs used to have. More's the pity.
The Baseballs: Call Me Maybe 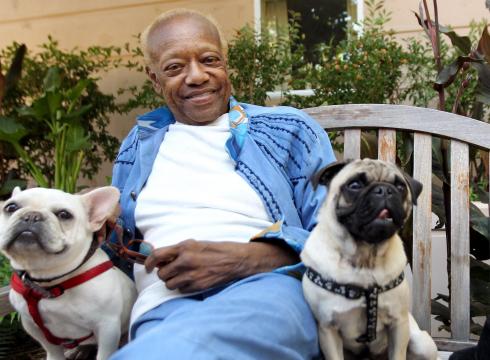 Elders: 2012 was a great year for the eligible-for-senior-discounts crowd, with none stronger than my man Zimmy. Dylan's Tempest was another winner in an unbroken series of late-career albums stretching back to 1997, this one making the transition from cynical and cranky to downright ornery. But others in his cohort, including Brian Wilson, Leonard Cohen, Dr. John and Bonnie Raitt also showed up with documented proof of the value of wisdom and experience. McCartney showed his versatility by starting the year showing off his crooning powers via a set of pre-rock standards, and finished by taking the Kurt Cobain chair in a Nirvana reunion. Fine entries also from Patti Smith, Jimmy Cliff, Santana, and the comeback of the year came from Bobby Womack (pictured). There were also splendid posthumous releases from George Harrison, Joey Ramone, and the Rolling Stones. Oh wait...
The Rolling Stones: Doom and Gloom

Electronica: This is the real cutting edge, where the music of the future is being assembled, though I guarantee it sounds better through club speakers than on that laptop in front of you. Even Rolling Stone readers know who Deadmau5 and Skrillex are, but for my money the choicest beats of the year came from Flying Lotus, Dan Deacon and Andy Stott. I got a kick out of Scissor Sisters' "Let's Have A Kiki," and efforts from Matt Zundel, Crystal Castles and Todd Terje, how you say, "reward repeated listenings." My daughter really liked Swedish House Mafia's "Don't You Worry Child." Too bad they broke up.
Flying Lotus: Until the Quiet Comes

Not So Fast: This is the mix I always give my mom, filled with the year's less-frenetic music. There is some lovely work on Calexico's latest, as well as from next year's star/this year's critic's pet Jessie Ware. Usually louder bands like White Denim and the Dum Dum Girls contributed some hushed ballads, ("Lord Knows," and "Get Back to Love," respectively) and Canadian Invasion stalwarts Metric gave us the haunting "Speed the Collapse." If you like this sort of thing, you should know about Patrick Watson, Ariel Pink and TV Girl, and either way, you want to check out "Adorn," by Miguel, (channeling Marvin).
Miguel: Adorn

Obits: This is the only playlist I put together that is not full of music from 2012, and as such it's no help at all in compiling my ballot. On the other hand, it's usually one of the coolest mixes of the year, comprised as it is of all the finest musicians who passed away during the year in question. This year we lost some awesome nonagenarians, from Ravi Shankar and Earl Scruggs to Kitty Wells and Doc Watson (Not to mention centenarian Elliot Carter). Also, unfortunately, quatragenarian Adam Yauch (pictured). My mom waved goodbye to Andy Williams, and my wife to Robin Gibb, as I did to Davy Jones. Etta James and her mentor Johnny Otis passed the same year, as did disparate guitar virtuosi Terry Callier and Mickey Baker. Certainly the world will never see another like Levon Helm, who, like Etta, I had the good fortune to see onstage. A tip of the hat also to Fontella Bass and Mike Auldridge, who died too late in the year to get onto the tribute CD.
Levon Helm: Ophelia

Rock On: For those who find "less frenetic" to be synonymous with "soporific," this playlist celebrates the louder sounds of the year, not least of which is Joan Osborne's thunderous take on Slim Harpo's "Shake Your Hips." The aforementioned Rolling Stones stand up just fine next to rockers half their age, including comeback efforts from Soundgarden and Bad Brains. Japandroids and Ty Segal made some of the year's best albums, and newcomers The Men and Gary Clark Jr. came on strong. I would be remiss if I did not mention The Hives, a breath of fresh air to anyone who needs their ass rocked. Props also to the amazing Sleigh Bells, and, as always, to Mr. Jack White.

Urban: This is the playlist for your NSFW rap and hip-hop tunes. I'm partial to The Coup and Killer Mike, but also bow to the inevitability of Kendrick Lamar and Frank Ocean. Last year's contenders Shabazz Palaces contributed a cool single, "Bop Hard." I also really like the Knux, and totally got off on "Wut," a tune by Le1f (not sure how to pronounce your name, dude). Still don't know if Die Antwoord (pictured) is a Spinal Tap-style parody or not, and enjoy it either way. Danny Brown is one of my favorite new rappers, and gotta give props to Nas, now and forever. Look also to Macklemore's "Same Love" and Saigon's "Rap vs. Real."
Le1f: Wut

Women: Always offer this playlist to offset any testosterone imbalances, though the Avant, Catchy and Americana lists are generally full of strong female voices. Strongest of the year, though, is Fiona Apple, whose The Idler Wheel... is not easily pigeonholed into any recognizable genre. Love her or hate her, Lana Del Rey's "Born to Die" is a killer single in any year. On this list we also find the comeback effort from Garbage, the impossible catchy single from Norah Jones, and the underground sensations THEESatisfaction. Cat Power and Bat for Lashes are here, and Kelly Hogan, Iris DeMent and Bonnie Raitt visit from other playlists. I will always love Regina Spektor, likewise Santigold. And how could you not include Alicia Keys teaming up with Nicki Minaj?
Fiona Apple: Every Single Night

World: My world music playlists are usually strong on music from Africa, Latin America and the Middle East, even though it's a bigger world than that out there (still searching for that Antarctic folk sound). Nevertheless, entries from Greece and Indonesia fit in just fine amidst fine efforts from superstars like Cafe Tacvba and Amadou & Mariam. Amazing debut effort from Fatoumata Diawara, great sophomore work from Bomba Estereo, and awesome compilation Ondatropica. Like many others, I was bowled over by the Debo Band and the Egyptian Project. But my favorite world album of the year was En Yay Sah by Janka Nabay and the Bubu Gang. More of that, please!
Janka Nabay and the Bubu Gang: Eh Mane Ah

So after all that winnowing and gleaning from such a wealth of musical riches, what did I end up voting for? Stay tuned...
Posted by MZepezauer at 5:56 PM