The Ballad of Abbott and Gus 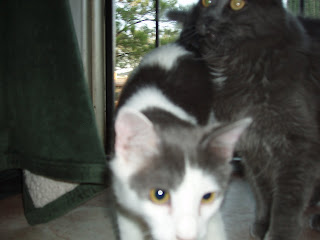 Gil's untimely demise was a kick in the teeth for all of us, not limited to the humans among us.  In particular, his brother Gus, not previously noted for histrionics, had taken to yowling plaintively in the wee hours of the morning, lamenting the absence of his companion. Gil and Gus were brothers of the same mother, of radically different temperaments, and yet, as cohabitant cats will be, mutual cuddlers, groomers, and playmates.

During Gil's long decline, both the cat and the dog avoided him, gave him his space, and seemed to know he was a dead cat walking. much as they know an earthquake before it hits. After Gil was gone, Gus of course felt the loss more acutely than did Carter. Gus, unlike, Gil , had no relationship to speak of with the dog, and showed no predeliction for expanding same in the absence of his kin.

Given Gus' obvious distress, it was decided that what he really needed -– and not him alone – was a kitten. But as previously noted:

The problem with a kitten is that

Eventually it becomes a cat

And selecting a cat is, basically, selecting a life companion for a good fraction of one's life - perhaps a quarter, if one and the cat are lucky, or, if not, a fifth, a sixth, or less. My cats and I, as careful readers will have noted, have not had good luck.

Of the twelve cats in my life, half of them have cashed in their chips rather on the early side. The other half lived into a ripe old age, which is, of course, what I wish for Abbott and myself. If we're both lucky, we'll be together when my children have assumed their college debts and given me my grandchildren.

If not, either he or I - or both - will leave grand memories behind for our survivors. At present my family and I are rapidly racking up grand memories of Abbott, a singular cat if ever there was one.

By now I think I've known enough cats to recognize the spark of intelligence in their eyes (or lack of same). Gil had it, and his sweet doofus brother, alas, does not. Abbott, on the other hand, is clearly a cat who lives by his wits.  When considering Abbott, we also considered the many alternatives. Of the key contenders, it was decided that Finn was too bold, and Wren was too shy. though both would doubtless find good homes. 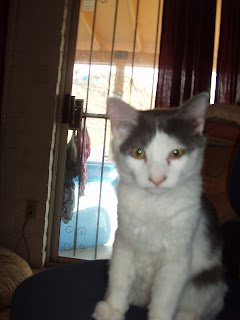 It might have been easier for Gus if we had gotten a younger kitten - Abbott is nearly five months old at this point, and has spent some considerable time starving on urban landscapes, gaining streetwise skills Gus will never know.

So upon the arrival of the newcomer, Gus, who is easygoing to a fault, did not exactly take offense, but neither did he embrace Abbott as the answer to his despair. Eventually, it's clear, they will be fast friends, but right now, we're in the transition phase, and even a four-year-old cat has his dignity.

Gus and Abbott spend a bit of time together, but though  Gus is the elder, Abbott is the wiser, and he runs rings around his elders, both cat and dog. Like Gil, Abbott regards the dog as a simpleton placed on this earth for his amusement, and regards Gus as, at best, an equal.

As far as I'm concerned, kittens are placed on this earth for my amusement, and Abbott is worth every penny we paid. If he's lucky, and I am, as well, we'll enjoy retirement together in our dotage, no matter the statutory eligibility for Medicare and other such benefits.
Posted by MZepezauer at 10:21 PM